Hundreds Of Hondurans Have Formed A Migrant Caravan Heading To U.S. (Anticipating Biden) 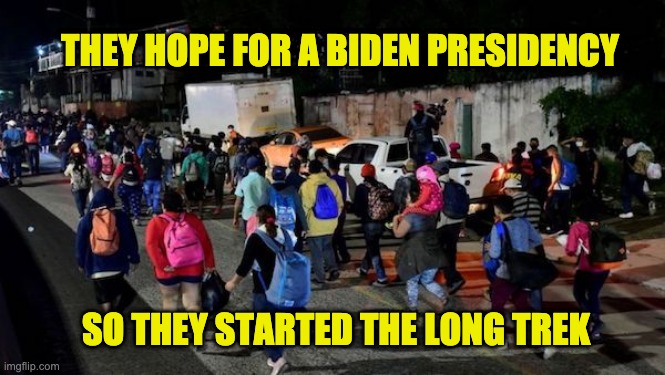 With the hope of a Joe Biden presidency who has vowed to roll back President Trump’s border control measures, hundreds of Hondurans are heading for the U.S. border. Hondurans’ Migrant Caravan.

Reuters reports that the caravan, which set out on Wednesday, was triggered by devastation from hurricanes Eta and Iota that hit the country two weeks apart in November. A motivating factor is the possibility of a new administration that pledged to be much easier on illegal border crossers than the current administration.

A few hundred Hondurans formed a caravan bound for the United States on Wednesday after hurricanes battered the country, posing a fresh challenge to efforts to stem illegal immigration from Central America on the cusp of a new U.S. administration.

Mostly younger migrants with backpacks and some women carrying children left the northern city of San Pedro Sula on foot for the Guatemalan border after calls went out on social media to organize a caravan to the United States.

One man from La Limas, from the southeastern edge of San Pedro Sula, which was devastated by flooding from Eta and Iota, told Honduran television that he was joining the caravan with his wife and cousin because, “We lost everything, we have no choice but to go to the United States.”

Will Mexico let them through, or will they remove their soldiers blocking the caravan path if Biden becomes president?

Guatemala’s migration authorities warned the approaching migrants that to enter the country, they would need negative coronavirus tests and passports.

It appears that this could be just the beginning if there is a shift in how illegal border crossings are handled.

Jose Luis Gonzalez, a coordinator of the Guatemala Red Jesuita con Migrantes, a non-governmental organization, said many migrants are encouraged to make the trip and test the Biden administration.

“When there is a change in government in the U.S. or Mexico, caravans start to move because they are testing the waters to see how authorities respond,” he told the Philadelphia Inquirer. “What they see is that the one who said he was going to build a wall and hated Latinos is on his way out.”

Gonzalez expects the number of caravans to increase in the coming weeks, following the hurricanes, a year of travel bans, and soaring unemployment.

“People are no longer scared of the coronavirus. They’re going hungry, they’ve lost everything and some towns are still flooded,” he added, according to the Inquirer.

There is a severe problem with the immigration system. While it’s completely understandable that people want to start over after a natural disaster, walking over 1,200 miles through a large swath of Mexico to cross the border illegally seems like a bad idea.  It’s a dangerous journey.

There are humanitarian ways to allow people to claim refugee status, and this isn’t it.

Many organizations are providing aid to Hondurans that have been displaced by the tremendous damage caused by the hurricanes, The Red Cross, Samaritan’s Purse, and Care, to name a few. Even the City of Miami has stepped up to help. And that’s with the economic devastation that’s happening pretty much everywhere due to lockdowns triggered by the coronavirus.

How will Joe “Wear A Mask!” Biden handle hundreds of people without masks and not socially distanced traveling together in a caravan through Mexico, a place that the CDC has recommended that you not travel to because of the “very high level of COVID-19”?

Will that make a difference, or is he too afraid of alienating his socialist base to raise the issue?

I think I know the answer to that, but what do YOU think?