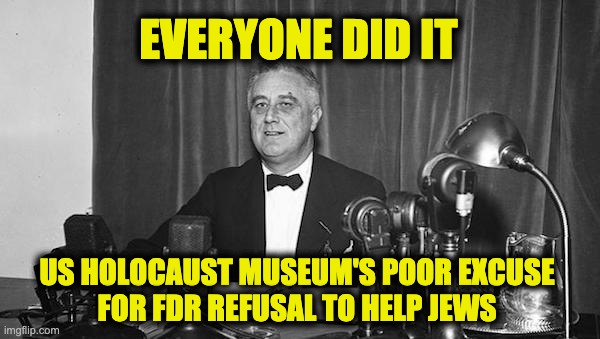 Every frustrated parent has, at some point, had to deal with a child who justified his misbehavior because “everybody else was doing it.” That’s what one expects from a kindergartener. It’s not what one expects from a spokesman for America’s most prominent Holocaust museum as a way of justifying President Franklin D. Roosevelt’s response to the Holocaust. Holocaust Museum protects FDR

We recently authored a widely-published essay documenting the fact that FDR and his administration pursued cordial, sometimes even friendly, relations with Nazi Germany during the 1930s [which can be read at this link].

The president’s actions and his administration included welcoming Nazi warships to U.S. ports, allowing deceptive labeling on German imports to elude anti-Nazi boycotters, censoring anti-Nazi remarks by cabinet members, and refraining from publicly condemning the Hitler regime’s persecution of German Jews (from 1933 until late 1938). Our essay noted that none of this is mentioned in the exhibit on “Americans and the Holocaust” at the United States Holocaust Memorial Museum in Washington, D.C.

None of the museum’s staff historians have disputed the accuracy of our essay. Instead, the museum issued this statement by its communications director: “The exhibition reveals how many segments of American society, not just the president, but also Congress, the State Department, the media, and the public knew about the persecution and murder of the Jews while it was happening but for the most part failed to respond.”

In other words, don’t focus the blame on FDR because everybody was doing it.

We’ve encountered this peculiar line of argument before. When I (Stephen Norwood) delivered a lecture exposing American universities’ ties with Nazi Germany, later published in my book The Third Reich in the Ivory Tower (2009), defenders of Harvard and Columbia responded with the everybody-was-doing-it line.

Columbia University provost Alan Brinkley declared: “American interactions with Nazi Germany – financial, commercial, cultural, academic, and political — were extensive throughout the 1930s…If the events that Professor Norwood describes are examples of ‘collaboration,’ then the collaborators include many thousands of leaders and citizens of the United States, Britain, and many other nations.”

Those are pretty weak arguments, to put it charitably. The “tasteless” cultivation of Nazi ties by Harvard in the 1930s hardly compares to whatever “tastelessness” was going on in America in the first decade of the 21st century. And if there were “thousands” of Americans who forged friendly relations with the Nazis, that hardly makes Columbia’s behavior acceptable.

There are two significant problems with the “everybody was doing it” line. The first is that it’s immoral. Right and wrong should never be determined according to what other people are doing. You would think that would be obvious to the leaders of the U.S. Holocaust Museum, Harvard University, and Columbia University.

The second problem is that it’s historically indefensible. “Congress, the State Department, the media, and the public” —the villains cited by the Holocaust Museum spokesman—were not equal actors alongside President Roosevelt in their knowledge of, or ability to respond to, news of the Holocaust.

–Congress did not stop FDR from helping the Jews. Although most of Congress was anti-immigration in the 1930s and early 1940s, Roosevelt still could have admitted nearly 200,000 more Jewish refugees from 1933 to 1945 through unused quota places, without congressional approval or action. Moreover, when members of Congress, in late 1943, introduced a resolution to create a refugee rescue agency, the Roosevelt administration strongly opposed it.

–The State Department did not stop FDR from helping the Jews. On the contrary, the State Department enthusiastically implemented Roosevelt’s policy of downplaying news of the Holocaust, suppressing refugee immigration, and ignoring or obstructing opportunities for rescue.

–The media did not stop FDR from helping the Jews. Roosevelt’s refugee policy was not based on media coverage. In fact, the administration was partly to blame for the media’s inadequate coverage of the mass murder of the Jews because the president and his spokesmen, who set the tone that much of the news media followed, downplayed that news.

—Nor was the American public to blame for FDR’s abandonment of the Jews. The public didn’t have the power to rescue Jews from the Nazis.

Franklin D. Roosevelt, however, did have that power. As president, he had the ability to help Jewish refugees without undermining the war effort. He had the moral responsibility to act against the murder of millions of innocent people by taking steps that would not have affected the war effort, such as opening America’s doors to refugees or bombing the railways and bridges leading to Auschwitz (by U.S. planes that were already bombing adjacent targets).

The taxpayer-funded U.S. Holocaust Museum should be telling the whole truth, and nothing but the truth, concerning Roosevelt’s abandonment of the Jews—not minimizing FDR’s responsibility by resorting to childish excuses about how everybody else was abandoning them, too.

(Dr. Medoff is founding director of The David S. Wyman Institute for Holocaust Studies and author of more than 20 books about Jewish history and the Holocaust. His latest book, The Jews Should Keep Quiet: Franklin D. Roosevelt, Rabbi Stephen S. Wise, and the Holocaust, is available at Amazon) Dr. Stephen Norwood is Professor of History and Judaic Studies at the University of Oklahoma; his latest book, which is in press, is Prologue to Annihilation: Ordinary American and British Jews Challenge the Third Reich.)

Jeff Note: Typically, when one asks a Democrat about Franklin Delano Roosevelt,  they immediately develop a sense of awe and genuflect as if he came down from heaven to lead the United States. It’s hard to understand the reverence for FDR–he never helped the economy, was a bigot who put Americans of Japanese descent into camps, and was an anti-Semite who doomed at least 200,000 Jews to die at the hands of Hitler’s “Final Solution.”  For more about FDR’s Antisemitism, please click here.