Hispanic Voters Have Abandoned Joe Biden And The Democrats 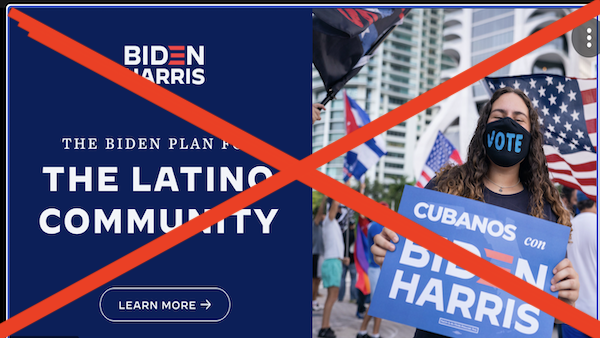 In what is awful news for the Democrat Party, Hispanic voters have dramatically turned against Joe Biden as their support for Biden plummets.

The historically Democrat voting block is also continuing its turn toward Republicans that was started in 2016 when Donald Trump first ran for the White House.

The news comes from the historically left-leaning Quinnipiac poll in its last Wednesday results.

Only 26% of Hispanic voters approve of Biden’s job performance, compared to 54% who disapprove, according to a Quinnipiac poll released Wednesday.

Perhaps most striking, the poll found a staggering 41% of Hispanic voters “strongly disapprove” of Biden’s handling of the presidency, while just 12% “strongly approve.”

A downward trend in Hispanic support for Biden has been ongoing for months.

Biden comfortably won the Hispanic vote in 2020 with 59%, according to the Pew Research Center. Since then, however, Hispanic support for the president has plummeted, reaching the 30s last year and now the 20s. Even polling finding a higher approval rating for Biden among Hispanics today still shows a 20-plus-point drop over the past year.

But it shouldn’t be a big surprise. The Democrats don’t realize that, just like the non-Hispanic American population, the first priority for Hispanic Americans is feeding and protecting their families and making sure their children are educated. Biden fails in all those areas,

Other polls have seen Hispanics move toward the GOP with a 20-point swing over the last few years. And one poll even said that Hispanics were evenly split between Democrats and Republicans, a seismic shift if true, Just the News added.

It’s all been true in Texas and Florida for a while. But the trend is also being seen elsewhere. At least one election outside Texas has already witnessed such a shift. Virginia Governor Glenn Youngkin, for instance, won the Hispanic vote in last year’s gubernatorial bout against Clintonista Democrat candidate Terry McAuliffe.

This is disastrous news for Democrats as it has been widely assumed that more Hispanics automatically means a lock-in power for the Democrats.

That, though, does not seem to be axiomatic.