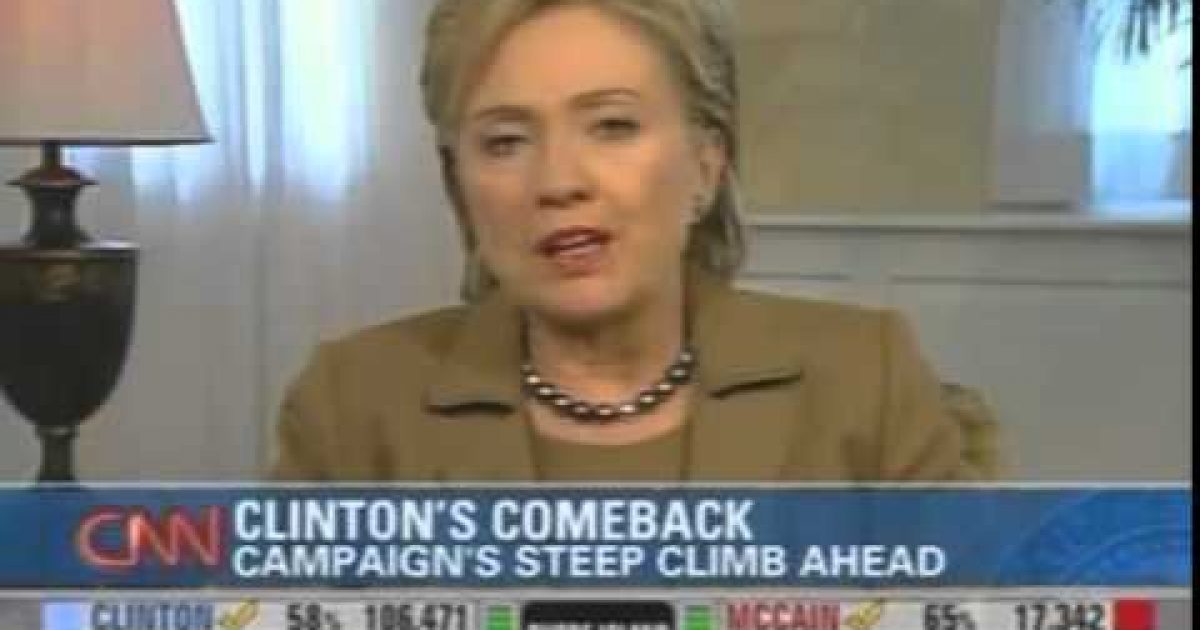 As the mainstream media continues to find anything they can to damage the Republican candidates (the latest of which is that Ben Carson continued to support and invest in real estate with his best friend who committed health care fraud) perhaps its time for the mainstream media to give widespread coverage to these six (or the many other) Hillary Clinton public lies which received a little coverage in the past, but aggregately paints a true picture of the presumptive Democratic Party candidate as a chronic liar.

1)bBosnia:  She had to dodge sniper fire. As recounted by Ron Fournier in 2008:

As a journalist on the trip, the story I wrote began, “Venturing to the front lines of the Bosnia peacekeeping mission, Hillary Rodham Clinton greeted U.S. troops today and heard horror stories about the region’s devastating civil war.”

It continued: “Security was tight — fighter jets accompanied her DC-17 cargo plane to Tuzla — but officials said the first lady took no extraordinary risks on the trip.”

In her biography, Clinton wrote about the reports of snipers in the hills and said she met with local children on the tarmac, adding that the gathering was cut short by security concerns. All plausible, and a mission to be proud of.

But during a speech last week on Iraq, Clinton stretched the truth to the breaking point. “I certainly do remember that trip to Bosnia and … there was a saying around the White House that if a place was too small, too poor, or too dangerous, the president couldn’t go, so send the first lady. That’s where we went. I remember landing under sniper fire. There was supposed to be some kind of greeting ceremony at the airport, but instead we just ran with our heads down to get into the vehicles to get to our base.”

Hogwash. The truth is:

Clinton and her aides stood behind the story — which she has told more than once — until video surfaced showing the former first lady, her daughter, Chelsea, and their entourage strolling off the plane and walking calmly across the tarmac.

2)  Three of her “immigrant” grandparents were born in the U.S.A.:  Buzzfeed found this one back in April:

But she didn’t really have a role. In 2008 Glenn Kessler the WAPO fact checker wrote: As the Boston Globe recently noted, her stories of bringing Protestant and Catholic women together have become more dramatic with each retelling. The claim that she brought Catholics and Protestants together ‘for the first time’ seems dubious.”

Kessler continued, “Clinton has taken an interest in the Northern Ireland peace process, visiting the area seven times between 1995 and 2004 – making five of those trips as first lady. Clinton has said that she ‘helped bring peace to Northern Ireland.’ Of course, ‘helped’ is a fairly weak claim, one that could be made by nearly anyone who contributed in a way that didn’t actively hinder the process. Clinton was not directly involved in the peace negotiations that eventually led to the Good Friday Agreement. Her work focused on encouraging Irish women to take a more active role in the male-dominated peace talks.

In March 2008, David Trimble, the leader of the Ulster Unionist Party in Northern Ireland who shared a Nobel Peace Prize for the settlement,  told the U.K. Daily Telegraph that Clinton’s claim was ‘a wee bit silly.‘ He said, ‘I don’t want to rain on the thing for her, but being a cheerleader for something is slightly different from being a principal player.'”

4)  She negotiated for Macedonia to open its borders: In 2008 Hillary said on CNN’s American Morning

“Well, you know, there isn’t any way that anyone who has not been president, but you know the administration sent me to war- torn zones. I was the first person from the Clinton administration to go into Bosnia after the Dayton peace accords. You know, I went to Macedonia and sat down with their government and negotiated opening up that border. There are a lot of examples.”

According to FactCheck.org  in 2008, which at the time was supporting Obama so it was ok to tell the truth about her, that was another Clinton’s lie.

More significantly, Clinton did not in fact ‘negotiate on matters such as opening borders for refugees during the war in Kosovo.’ Macedonia had reopened its border to Kosovar refugees the day before Clinton’s arrival, as has been widely reported.“

5)  That famous situation room picture during the Bin Laden raid where she had her hand over her mouth. In July 2014 Hillary told BBC Radio’s Jeremy Vine that the reason her hand was over her mouth in that famous picture (at the top of this post):

..and as I write about in the book, it was a direct video feed on what was going on outside the house. So we saw the helicopters land, we saw our seals get out and take up their positions. We also saw one of the helicopters tails hit the wall as it was attempting to get into the courtyard of the compound, disabling the helicopter. I think that may have been when my hand went over my mouth because my heart was in my throat.”

But thats not what she told Reuters in July 2011:

“An allergy and not anguish may explain why Secretary of State Hillary Clinton had her hand to her mouth while watching the commando operation to kill Osama bin Laden, she said on Thursday. A photo of Clinton, President Barack Obama and other senior officials watching the operation live from the White House situation room has become one of the most striking images of the raid that killed the al Qaeda leader.”

(…) Those were 38 of the most intense minutes. I have no idea what any of us were looking at that particular millisecond when the picture was taken,’ she said on Thursday when asked about the photo during a visit to Rome. ‘I am somewhat sheepishly concerned that it was my preventing one of my early spring allergic coughs. So it may have no great meaning whatsoever,’ Clinton added.”

6)  She claimed that she was named after Sir Edmund Hillary, the first person to climb Mt. Everest:

In 1995 she even told the story to the people of Nepal:

For her part, Mrs. Clinton confessed that her mother, Dorothy Rodham, had read an article about the intrepid Edmund Hillary, a one-time beekeeper who had taken to mountain climbing, when she was pregnant with her daughter in 1947 and liked the name. ‘It had two l’s, which is how she thought she was supposed to spell Hillary,’ Mrs. Clinton told reporters after the brief meeting on the tarmac, minutes before her Air Force jet flew past the peak of Everest itself. ‘So when I was born, she called me Hillary, and she always told me it’s because of Sir Edmund Hillary.'”

Ms. Clinton’s mom must have been a time traveler or at the very least someone who could see into the future, because Sir Hillary reached the top of Everest on May 29, 1953, almost six years after Democrat Hillary was born on October 26, 1947.

Like the Marines story we covered twice during the past week, the above lies were covered by the the mainstream media but frankly much less broadly as the covered the Carson/West Point story. In the end the lies above and the many more like them she made, point to the fact that Hillary Clinton is a liar. And that doesn’t even include the lies she made about Benghazi and her email server.

A liar like Hillary shouldn’t be allowed anywhere near the oval office, even on a tour..she might steal something.