Why Did Biden’s Campaign Hire Hillary’s Cybersecurity Firm Accused Of Spying on Trump? 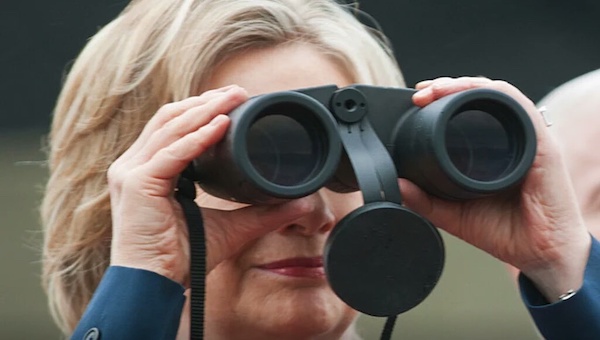 And before you give your answer, we already know that no other campaign besides Hillary and Biden had hired this dubious outfit.

The Durham investigation plods along slowly, but it continues moving forward. The latest documents to have caused a stir have some details about Trump’s data being wrongfully mined and exploited. If you would like the particulars and implications explained in some detail, Mark Levin laid out what the legal significance of those documents really mean in the first hour of his radio show.

The corporate press is doing all they can to deflect from this story or dismiss it as a non-issue. That’s a misrepresentation of what this step means. This step clears the way for future steps in the investigation, exposing legal conflicts of interest that might otherwise provide an occasion for a criminal case to be dismissed. This is by no means to be seen as the final chapter of this saga.

In a court submission last week, Durham alleged that a tech executive, who was supposed to be helping the government combat cyber threats, used his privileged access to Internet data — specifically, domain name system (DNS) traffic between servers — to mine contacts between Russia and facilities connected to Donald Trump. The information, Durham says, was taken out of context and distorted to suggest that Trump might be a clandestine agent of Vladimir Putin’s regime. Alarmingly, some of the Internet traffic mined in early 2017 was generated by the Executive Office of the President — the White House. That is, the tech executive, who has been identified as Rodney Joffe, was monitoring then-President Trump, trying to portray him as Putin’s mole.

In other words: He was spying on the President of the United States with the aim of harming his ability to govern the country. [Emphasis added]

So, it appears (is alleged) that Clinton hired Joffee to perform some wildly nefarious and unconstitutional acts in the service of making sure Hillary Clinton did not have to stand by and watch a ‘smooth transition of power’ between Obama and Trump. The dates for which he is under suspicion of having illicitly spied on Donald Trump’s private data ranged from July 2016 until February 2017, when he was already a sitting President.

If you wonder why Trump has invoked the word ‘Treason’… well, now you know.

So, it’s already established that Hillary and the cyber firm in her campaign’s employ are under suspicion of some serious, serious crimes.

What are the odds that Biden’s campaign — and only Biden’s campaign — would hire that very same firm for… some kind of services or another. Why did Biden hire the very same cybersecurity firm that Hillary had… a firm which had just ‘happened’ to have successfully accessed President Trump’s private data?

With all the security firms in all of America, are we to believe that particular hire was merely an amazing coincidence?

It strains credulity, and the public deserves an explanation.

The Biden campaign paid nearly $20,000 to a cybersecurity firm at the center of Special Counsel John Durham’s investigation into the origins of the Trump-Russia probe.

The campaign paid Neustar Information Services in 2020 for accounting and compliance work, according to Federal Election Commission records. According to Durham, Neustar’s chief technology officer, Rodney Joffe, accessed sensitive web traffic data that the company maintained on behalf of the White House executive office in order to collect “derogatory” information about Donald Trump. Joffe allegedly provided the information to Hillary Clinton campaign lawyer Michael Sussmann, who in turn gave it to the CIA during a meeting in February 2017. Durham charged Sussmann in September with lying to the FBI about his investigation of Trump.

The Biden campaign’s payments raise questions about whether Joffe continued snooping on Trump in the most recent election. The Biden and Clinton campaigns are the only two presidential committees to have ever paid Neustar, according to Federal Election Commission records. Biden’s campaign paid Neustar $18,819 on Sept. 29, 2020, the records show. The Clinton campaign paid the firm $3,000 in May 2015 for mobile phone services. The Democratic Congressional Campaign Committee paid $3,000 to Neustar in 2017. Neustar executives and staffers contributed $17,906 to Biden’s campaign, FEC records show. [emphasis added]

Was this just another step in ‘fortifying the election’ that Time Magazine talked about when it reported that Well-Funded Cabal’ Worked To Change Election Laws, Control Flow Of Information

But go ahead, RINOs, by all means. Keep all the public’s attention fixed on the 6th of January. The Democrats desperately need you to keep running cover for them… at least until those midterm elections come around.