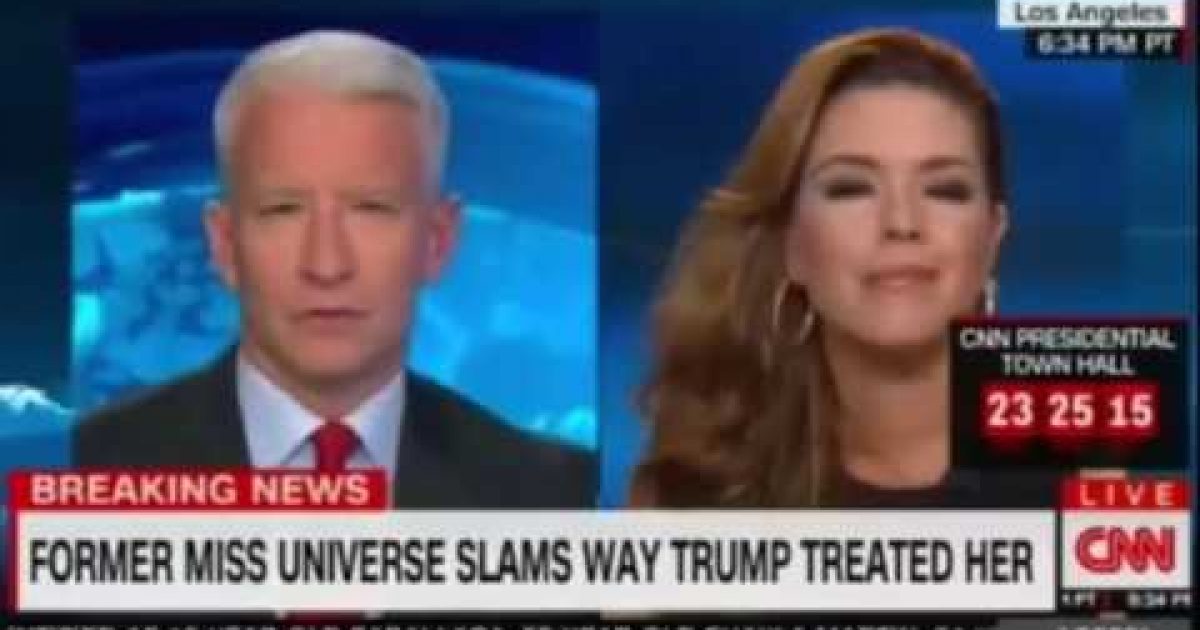 During Monday nights debate Hillary Clinton pointed to Alicia Machado who was the first woman to win the Miss Universe beauty contest after Donald Trump purchased it (1996) as an example of Trump’s misogyny. But the woman Hillary Clinton is defending a isn’t all she’s cracked up to be. She basically broke the Miss Universe contract by making herself too heavy to play the part of a beauty queen (her crown was only saved by the intervention of Trump), she was accused of driving the getaway car in an attempted murder but “got off” because of lack of evidence, and followed up by threatening a judge. However on Tuesday’s Anderson Cooper show on CNN she basically admitted her guilt, saying “that happened 20 years ago,” “I am not a saint.” and “That moment in Venezuela is wrong.”

During the debate, Hillary opined:

He loves beauty contests, supporting them and hanging around them — and he called this woman ‘Miss Piggy,’ then he called her ‘Miss Housekeeping’ because she was Latina. Donald, she has a name. Her name is Alicia Machado. And she has become a US citizen and you can bet she is going to vote this November.

As one might expect coming from his political opponent, that was only part of the story.

According to CNN on January 29, 1997 after she was crowned Ms. Machado’s weight ballooned from 118 pounds to 178 pounds a 50% increase. Based on the contract she signed and the position she held Machado’s weight gain was no different than an athlete showing up for spring training way of his or her weight.  And Trump’s reaction was no different than any coach or manger faced with an athlete who let themselves go.

At the time of her weight gain, rumors also surfaced that she might be forced to give up her Miss Universe crown.

But Trump, as co-owner of rights to the pageant, said he would never let that happen. “We had a choice of: termination or do this,” he said. “We wanted to do this.”

“A lot of you folks have weight problems. I hate to tell you,” Trump told the rowdy pool of reporters.

The pageant’s meaning of “do this” was for Machado to get her weight down to about 130 pounds. At a recent photo op, Machado — hardly a blimp at 5-foot-7 — pedaled a stationary bicycle and jumped rope in front of a pack of photographers and reporters who could themselves use a little training.

He admits to body shaming her as a way to push her to lose weight. “To that, I will plead guilty,” he said, expressing no regret for his tactics. But the humiliation, Ms. Machado said, was unbearable. “After that episode, I was sick, anorexia and bulimia for five years,” she said. “Over the past 20 years, I’ve gone to a lot of psychologists to combat this.”

Ms. Machado may not have been entirely honest when she blamed Trump for her anorexia and bulimia, because in May 1997 she told the Washington Post that she suffered from those afflictions before the Miss Universe beauty pageant and blamed them on her preparation, or as she called it “beauty-pageant plague.”

“I was anorexic and bulimic, but almost all of us are,” Machado says without so much as a blink. “When I was preparing for Miss Universe, it was an obsession for me to not gain weight. By the time I won, I was actually recovering. But the year leading to it, I didn’t eat at all. And whatever I ate, I threw up. I weighed 116 pounds when I won. I was skeletal.”
The three weeks of events leading to the Universe pageant were torture, she says, because of all the meals she had to dodge. “There were lunches and dinners and just food and more food. I had to pretend to have headaches and menstrual cramps and anything I could think of to not come down from my hotel room.”

Ms. Machdo  also displayed criminal tendencies after he time as Miss Universe. For example she was accused of driving the getaway car in an attempted murder, and and threatening to kill a judge.

In February of 1998 the Associated Press reported that she threatened the Judge handling the above investigation,

A Venezuela judge said Thursday a former Miss Universe threatened to kill him after he indicted her boyfriend for attempted murder.

Venezuelan beauty queen Alicia Machado threatened “to ruin my career as a judge and … kill me,” Judge Maximiliano Fuenmayor said on national television.

The 21-year-old Machado, who created an international stir in 1996 when she gained 35 pounds after being crowned Miss Universe, allegedly called the judge after he issued an arrest warrant Wednesday for Juan Rafael Rodriguez Regetti.

Rodriguez, 26, is accused of shooting and wounding his brother-in-law, Francisco Antonio Sbert Mousko, outside a church in Caracas last November where Sbert’s wife _ Rodriguez’s sister _ was being eulogizing.

Rodriguez apparently blamed Sbert for driving her to commit suicide.

The victim’s family accused Machado of driving the getaway car, but Fuenmayor has not indicted her, citing insufficient evidence. The judge said there were no witnesses to place Machado at the scene _ or to back up her claim she was home sick at the time.

Machado could not be reached for comment Thursday. She was in the city of Maracay filming a soap opera Thursday, according to Mariela Castro of Venevision TV network. Machado’s lawyer was also unavailable for comment.

Fuenmayor said he planned to open a new case against Machado for Wednesday’s threatening phone call.

Hillary Clinton is defending a woman who basically broke her Ms. Universe contract by making herself unable to look the part and follow up on the appearances and endorsements required for the job and acted more like Bonnie of Bonnie and Clyde than Ms. Piggy. She was accused of driving the getaway car in an attempted murder but (like Hillary on the emails) she”got off” because of lack of evidence, and threatened a judge. And while Ms Machado says that Trump publicly shamed her, that shame would have been much worse if Trump hadn’t stepped in and save her crown.

Thanks to my friend Marc Morano of Climate Depot for sending me the Alicia Machado crime stories.

Last night on Anderson Cooper’s show Ms Machado basically admitted the getaway car/judge threat story was true were true, saying “that was in the past.”