Where Was The MSM When Hillary Was Sharing U.S. Military Technology W/Russia? 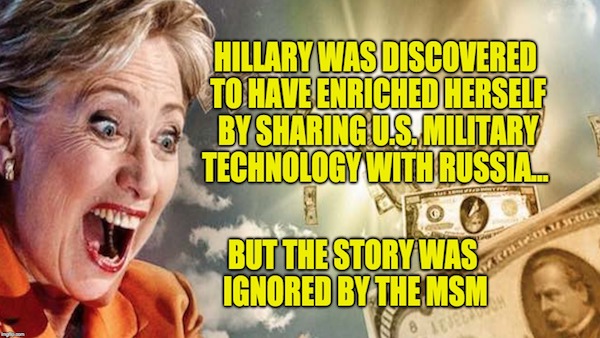 This post provides additional proof the MSM ONLY reports supposed wrongdoings by politician when it involves a Republican.

Coincidentally (if you believe in coincidences) the Clinton Family enriched themselves out of the deal.

In his July 2016 report Schweitzer explained that a key program of the “reset” was to help Russia develop its own version of Silicon Valley. Called “Skolkovo” and located near Moscow, it  housed technology  for developing bio-med, space, nuclear and IT technologies.

(…) Skolkovo was launched as “entirely a state project,” in the words of Walter Laqueur writing in Foreign Affairs. There would be housing for 30,000 people, as well as schools, shops, and parks designed by the government. The Russian government pledged to spend some $5 billion over three years to put Skolkovo together. The Russians desired major U.S. tech firms in Skolkovo. A Skolkovo Foundation was established to manage that effort. Ultimately dozens of U.S. tech firms including Cisco, Google, and Intel would make major financial contributions to the project

On first glance the project itself seem benign and possibly a good deal for both sides, the Russians get access to American cash and some of the country’s best technology, the U.S.-based companies,  gets access to the Russian market, receive special tax status and “special access to research in Russia. For example, one investment firm received “priority access to the database of the Skolkovo Foundation projects and companies, enabling it to select the most promising projects early in their development.”

(…) however, the state-of-the-art technological research coming out of Skolkovo raised alarms among U.S. military experts and federal law-enforcement officials.Research conducted in 2012 on Skolkovo by the U.S. Army Foreign Military Studies Program at Fort Leavenworth declared that the purpose of Skolkovo was to serve as a “vehicle for world-wide technology transfer to Russia in the areas of information technology, biomedicine, energy, satellite and space technology, and nuclear technology.”

That’s right, the Army called Hillary’s project a way for Russia to get the best of world technology. And while not an expert IMHO some of that technology seems military in nature, technology like Satellite and nuclear technology. Thankfully the project was designed not to include, or lead to military technology.  Or did it?

Moreover, the report said: “the Skolkovo Foundation has, in fact, been involved in defense-related activities since December 2011, when it approved the first weapons-related project—the development of a hypersonic cruise missile engine. . . . Not all of the center’s efforts are civilian in nature.”

So Ms. Clinton’s Skolkovo project helped to develop military technology for the same country that the mainstream media and Chuck Schumer’s Democratic Party lemmings believe that President Trump and his team colluded with, and with whom anonymous Washington Post sources claim the president shared Israeli intelligence. That same country which Mitt Romney once famously (and correctly) called America’s #1 geopolitical foe, Russia.

But more than that, Skolkovo may have created a for Russia a legal way to gain access to America’s classified technology, the kind of access they used to use espionage to access:

Technology can have multiple uses—civilian and military. But in 2014 the Boston Business Journal ran an op-ed placed by the FBI, and noted that the agency had sent warnings to technology and other companies approached by Russian venture-capital firms. The op-ed—under the byline of Lucia Ziobro, an assistant special agent at the FBI’s Boston office—said that “The FBI believes the true motives of the Russian partners, who are often funded by their government, is to gain access to classified, sensitive, and emerging technology from the companies.”

Ms. Ziobro also wrote that “The [Skolkovo] foundation may be a means for the Russian government to access our nation’s sensitive or classified research development facilities and dual-use technologies with military and commercial application.”

The military use of the Skolkovo developed technology should not be a surprise to Ms. Clinton:

A State Department cable sent to then-Secretary Clinton (and obtained via WikiLeaks) mentioned possible “dual use and export control concerns” related to research and development technology ventures with Moscow. And in its own promotional literature Skolkovo heralded the success of its development of the Atlant hybrid airship.

“Particularly noteworthy is Atlant’s ability to deliver military cargoes,” boasts the Made in Skolkovo publication: “The introduction of this unique vehicle is fully consistent with the concept of creating a mobile army and opens up new possibilities for mobile use of the means of radar surveillance, air and missile defense, and delivery of airborne troops.”

While Ms.Clinton was helping Russia develop new military technology with the Skolkovo deal, like so many of Hillary Clinton’s projects as Secretary of State (and revealed in Schweizer’s book Clinton Cash and movie of the same name) the Clintons found a way to use Skolkovo to enrich themselves:

As Schweitzer told the New York Post,  “It raises the question — do you need to pay money to sit at the table?”

“We don’t have an email or a pirated voice mail message saying ‘We’ll give you money if you help us with Skokovo.  But what we do have is a pattern that shows a high percentage of participants in Skolkovo who happen to be Clinton Foundation donors”

When Schweizer published his important report, and followed up by writing about it in the Wall Street Journal, the only thing one could hear from most of the mainstream media was the sound of crickets.

On the other hand this week using anonymous sources,  the Washington Post reported that President Trump shared intelligence with Russia about a possible ISIS  threat to passenger airlines using computers as suicide bombs. The Post claimed that the President presented the information in a way that could have outed the source of the information which wasn’t U.S. intelligence. The other three Americans in the room disputed the report saying that nothing was said that could have revealed the source or the methods of the intelligence, or even lead the Russians to figure it out themselves.

One of the participants in the President’s meeting with the Russians, U.S. National Security Advisor General McMaster, claimed that anything that was said in the room could be figured out with an internet search (something my colleague J.E. Dyer proved and wrote about in a recent post, it took her less than an hour to find the information).

While the initial reports didn’t mention who U.S. intelligence got the information from, the media who figured it out themselves. The day after the Wash. Post report their story, the NY Times and WSJ used anonymous sources to announce it was Israel who supplied the intelligence.

This became a major media story dominating news papers and TV newspapers with banner headlines and almost continual cable news coverage, how could Trump share information with the Russian?, how angry Israel was, etc., etc., and yadda, yadda, yadda.

There is much more to this report including the involvement of friend of the Clintons (and Hillary’s Campaign director) John Podesta. I strongly recommend you click here and read the entire report. And if you haven’t read Peter Schweizer’s Clinton Cash as of yet, you can purchase it at Amazon by clicking here, (what the hell are you waiting for!).