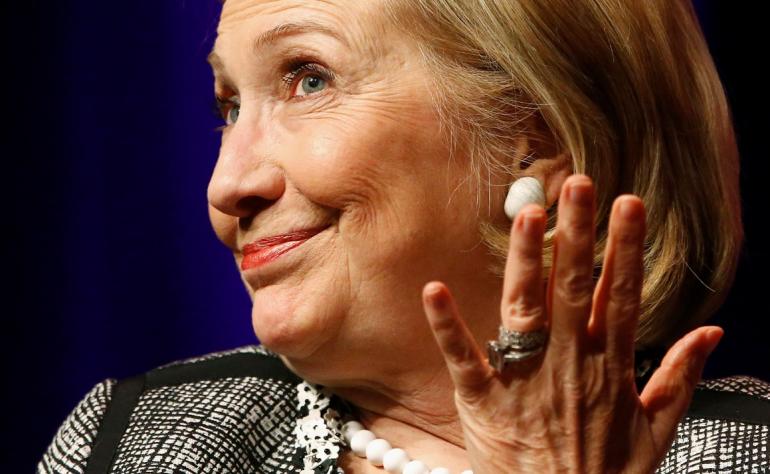 Note:  a video of the full interview is at the end of this post

When McElveen asked Hillary Clinton why her State Department allowed the transfer of 20 percent of all US uranium to the Russians, she claimed she had no involvement the State Department’s decision to approve the sale of the company Uranium One to Russia.

“I was not personally involved because that wasn’t something the secretary of state did,” said Clinton.

Schweizer responded incredulously, “The transfer of 20 percent of US uranium — the stuff used to build nuclear weapons — to Vladimir Putin did not rise to the level of Secretary of State Hillary Clinton’s time and attention?”

He then provided three reasons why she had to know (or should have known):

Since 2005, Giustra and Bill Clinton have frequently globetrotted together, and there’s even a Clinton Foundation initiative named the Clinton-Giustra initiative.

But Hillary expects Americans to believe she had no knowledge that a man who made a nine-figure donation to her foundation was deeply involved in the deal? Nor eight other mining executives, all of whom also donated to her foundation?

Second, during her Sunday interview, Clinton was asked about the Kremlin-backed bank that paid Bill Clinton $500,000 for a single speech delivered in Moscow. Hillary’s response? She dodged the question completely and instead offered this blurry evasion.

“The timing doesn’t work,” said Clinton. “It happened in terms of the support for the foundation before I was secretary of state.”

Hillary added that such “allegations” are being “made by people who are wielding the partisan axe.”

The reason Hillary ignored addressing the $500,000 direct payment from the Kremlin-backed bank to her husband is because that payment occurred, as the Times confirms, “shortly after the Russians announced their intention to acquire a majority stake in Uranium One.”

And as for her comment that the timing of the uranium investors’ donations “doesn’t work” as a damning revelation, in fact, the timing works perfectly.

Third, Clinton correctly notes in the interview that “there were nine government agencies who had to sign off on that deal.” What she leaves out, of course, is that her State Department was one of them, and the only agency whose chief received $145 million in donations from shareholders in the deal.

Does she honestly expect Americans to believe she was simply unaware that the deal was even under consideration in her own State Department?

Moreover, is that really the leadership statement she wants front and center heading into a presidential campaign? That in the critical moment of global leadership, with the Russians poised to seize 20 percent of US uranium, she was simply out to lunch?

Schweizer suggest that a review of her state dept. emails might prove or disprove Clinton’s story but oops they were erased by Clinton. Schweizer concludes with:

In the absence of such answers, Americans are left to believe only one of two potentialities regarding her involvement in the transfer of 20 percent of US uranium to Vladimir Putin: She was either dangerously incompetent or remains deeply dishonest.

If Clinton wasn’t involved in the sale as she claims it was a serious dereliction of her duties because Russia was and is an aggressive opponent on the world as Secretary of State Clinton should have have been involved in the decision. Either way whether she knew or not it is an indication that she should never sit in the oval office.