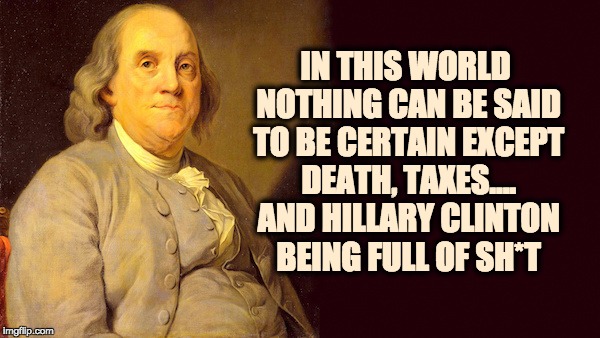 The mainstream media has spent much of the last two news cycles giving credence to Hillary Clinton’s excuses for losing the 2016 election. It will be interesting to see which (if any) media outlets cover this important Hillary story from Judicial Watch about a new release of her emails demonstrating that as Secretary of State, Ms. Clinton sent and received classified information using her unsecured email server and some of that classified information was shared with people who didn’t have clearance, including some of the Clinton Foundation personnel. Additionally she misused taxpayer-funded assets as Chelsea Clinton and others involved with the Clinton Foundation received special favors from Huma Abedin, her deputy chief of staff at Foggy bottom.

As usual Judicial Watch has led the way in getting information about Hillary Clinton’s Tenure at Foggy Bottom. This time 2,078 pages of documents were procured because they won another Freedom of Information Act lawsuit which requested all emails of official State Department business received or sent by former Deputy Chief of Staff Huma Abedin from January 1, 2009 through February 1, 2013 using a non-‘state.gov’ email address.”

Remember when Hillary said “as far as she knew,” all of her government emails were turned over to the State Department? Well either she didn’t know–or she was lying. I vote for the second because there is some damaging information in these emails including:

On December 6, 2010, Secretary Clinton shared classified information with non-U.S. government employees Justin Cooper, then-aide to Former president Bubba Clinton who set up (and owned) Hillary’s email domain and helped manage Hillary Clinton’s unsecure email system, and she shared classifed information with  Clinton Foundation director Doug Band (neither of whom held security clearances). The email instructs her aide Oscar Flores to “print for Bill”  (presumably Bill Clinton). The email exchange, covered allegations of ” the theft of foreign aid by Bangladeshi banker and major Clinton Foundation donor Muhammad Yunus, started with an email from an unidentified person to State Department official Melanne Verveer, who forwarded her exchange on to Hillary Clinton, who then sent it on to Flores, Cooper and Band.”

Yunus was accused of embezzling $100 million from the Grameen Bank he founded and was removed from it, although the charges were never proven, and Yunus reportedly returned the money. Subsequently, Clinton’s State Department was accused of threatening IRS action against the Bangladesh prime minister’s son in an attempt to stop a Bangladesh government investigation of Yunus.

On March 14, 2011,  Maria Otero who worked at State,  emailed Clinton information about the Grameen Bank/Foundation that was again deemed classified as Confidential by the State Department and redacted under FOIA exemption B1.4(D) – “Information specifically authorized by an executive order to be kept secret in the interest of national defense or foreign policy … Foreign relations or foreign activities of the United States, including confidential sources.” Once again Ms. Clinton exhibited a disregard for America’s secrets as she responded to Otero using her unsecured HDR22@clintonemail.com account and copies Abedin on Abedin’s unsecure email account, huma@clintonemail.com.

In May 2010, Ben Ringel, whose donations to the Clinton Foundation Judicial Watch previously documented, asked Abedin to intervene in an employment dispute on behalf of a USAID employee. Abedin agreed, telling Ringel to forward the woman’s documents to her official State Department email account.

In a May 21, 2011, email exchange sent to Abedin’s unsecure account, then- Ambassador Princeton Lyman sent information relating to his conversation with South Sudan President Salva Kiir Mayardit that is also redacted and classified as “Confidential.”

On July 17, 2012, Abedin forwarded to her private email account for printing a call briefing sheet for Clinton’s upcoming call with Joint Special Envoy Kofi Annan, which was classified Confidential and redacted under FOIA exemption B1.4(D).

The new emails also reveal other favors that were requested and carried out.

And then there was Huma Abedin’s collusion with Russia.

Hi Rina – wanted to connect on meeting at state department. Eddie trump passed on your email. Will be in touch soon

Just wanted to follow up and express our gratitude. I was contacted today by Ms. Christina Miner who invited us to be part of the US-Russia Cultural Sub-Working Group meeting next week. Thank you very much for all your assistance – if there is any way we can be of assistance, please do not hesitate to contact me.

fyi – we hooked her up with the right people here

The Russia-American Foundation was staffed by Clinton political supporters and operatives, received over $260,000 in grants for “public diplomacy” from the Clinton State Department, and its leadership was supportive of Obama’s Russia policies.

Then the time in July 2011, when Chelsea Clinton, then an executive of the Clinton Foundation wanted to go to Germany to see the U.S. woman’s soccer team play. Chelsea’s travel agent  asked Huma Abedin “to confirm that Chelsea’s travel costs could be placed on her parents’ credit card.” Abedin told the travel agent to stop making arrangement  for the trip. Instead Huma made Chelsea and Bari Luri, Chelsea’s Clinton Foundation chief of staff, part of the “official delegation” going to the match. The American taxpayers would pick up the costs, she would “fly on official govt plane both ways and the taxpayers (State Dept.) will take care of hotels and all transportation.”

When Betty Ford passed away Hillary told  Abedin that she didn’t want to fly on the same airplane with Michelle Obama on their way to the funeral: “I’d be honored to speak. Is it ok that we and Mrs. O take two separate planes?” So America paid for two airplanes.

These emails prove once again that Hillary Clinton paid fast and loose with taxpayer dollars and America’s secrets.  Perhaps it’s time to reevaluate bringing up charges against her. Thank God she lost the election.