What A Crock of Sh*t 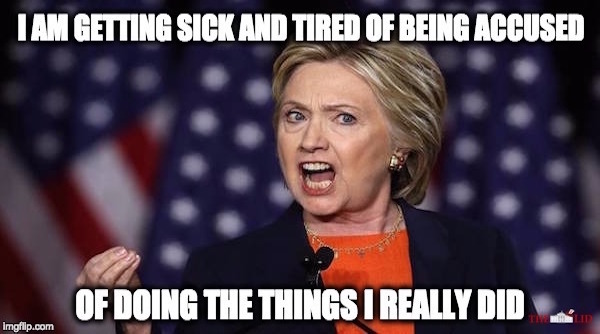 Hillary Clinton, perhaps the most corrupt person ever nominated to the White House by a major party, calls herself the “most investigated innocent person in America” in a new four-hour propaganda piece to be aired on Hulu Friday, the Daily Mail reports. In that same documentary, Bubba blamed his Monica Lewinsky affair on anxiety.

According to bullet points provided by the Daily Mail:

Clinton, Daniel Bates wrote, even said she felt like she’s been persecuted in an offhand remark while the cameras were rolling.

In other words, Clinton believes she’s above the law and is allowed to do whatever she wants.  And anyone who doesn’t like it is a Russian agent on Vladimir Putin’s payroll.

Bates said Clinton addressed “all” of the major scandals in her lengthy career through the prism of a victim.  That’s right, Hillary sees herself as the victim rather than the perpetrator.  And she blames God:

Hillary says: ‘Going all the way back to the Whitewater days. I’ve never understood this and I will go to my grave not understanding it. All these things get disproved, but the press, and I’m talking about the major press, they always bite.

‘And I don’t know why. There’s an old joke about an old guy who is walking along the edge of the cliff, he slips and as he’s falling down and he grabs onto a branch and he’s holding on and he’s praying, going “God, God I’ve lived a good life, I’ve done everything I supposed to do…please Lord help me, help me.”

‘And then this voice comes out and says “There’s just something about you that pisses me off”‘.

Here’s a trailer, provided by the Daily Mail: