Uh-Oh Hillary Says She Has The Urge (To Run Again)

Calm Down Bubba It's Politics Not Personal 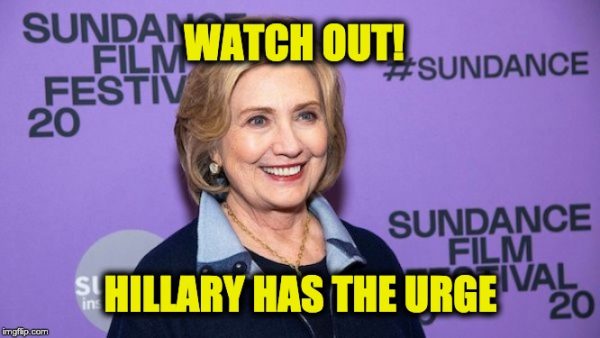 Hillary Clinton must be a glutton for punishment. After suffering a defeat at the hands of President Donald Trump in 2016, the two-time presidential loser Hillary says she has the urge to run again because she thinks this time she’ll win (If Hillary really believes that result is possible, she must be taking powerful drugs). Ms. Clinton was asked during an interview with Variety if she thought she could beat Donald Trump if she ran again?

I know you’re not running for president, but do you ever feel the urge to think: “I could beat Donald Trump if I were running.”

Yeah. I certainly feel the urge because I feel the 2016 election was a really odd time and an odd outcome. And the more we learn, the more that seems to be the case. But I’m going to support the people who are running now and do everything I can to help elect the Democratic nominee.

I know the words “Hillary Clinton” and “I feel the urge” in the same paragraph is creepy, but she is talking about politics.

The interview took place in Park City, Utah, where the former senator from New York is promoting a documentary, “Hillary,” that debuted at the Sundance Film Festival.  Something discussed here last week when she trashed Bernie Sanders, saying that no one likes him.

Also, in Park City, Hillary was interviewed by the Associated Press. She said a lot had changed since 2016 when Trump won the presidency despite being a political novice. She did not mention that a political novice with an excellent platform will beat a crappy candidate every time.

“I think there’s a story now to be told. Before he was a blank slate. He was a guy that people saw on their TVs. As you know, he was a reality TV star, Now I think there’s a record that he’s going to have to be held accountable for.”

That is something Trump supporters certainly hope for; after all, the economy is humming, he cut taxes,  income is up, especially for the middle and lower-income classes and unemployment is down.  President Trump should be held accountable for the economy.

But Mrs. Clinton promises to endorse and campaign for the eventual Democratic Party nominee.

“I will do whatever I can to support that person, because that wasn’t my experience in 2016,” says Clinton, adding that she will “absolutely” endorse a Democratic candidate at some point.

Though Clinton stumped for Barack Obama after he won the nomination on delegates (but, Clinton reminds, not in votes), Sanders’ support for Clinton, she feels, was minimal after their race.

Hillary also worries that the results won’t reflect the actual vote, a false claim she made about 2016.

“It is a concern because once the Supreme Court gutted Section 5 of the Voting Rights Act, they took away one of the most useful tools for holding states and local jurisdictions accountable for what they did around elections,” Clinton said. “And I was the first candidate running for president on the Democratic side who faced both the gutting of the Voting Rights Act and Citizens United. So I saw firsthand the concerted effort to purge voters and suppress voters. That’s still going on.”

Clinton, who beat Trump in the popular vote, favors the abolition of the Electoral College. “The person who gets the most votes should win,” she said. “The Electoral College is an anachronism that foils the rights of the majority of Americans to choose our leaders.”

The pleasant part of Hillary “getting the urge” to run is that despite what she told the AP, she must realize what everyone else knows. If Hillary Clinton ran again, she would lose by a much larger margin than she lost by in 2016. In other words, she should keep her urges to herself.