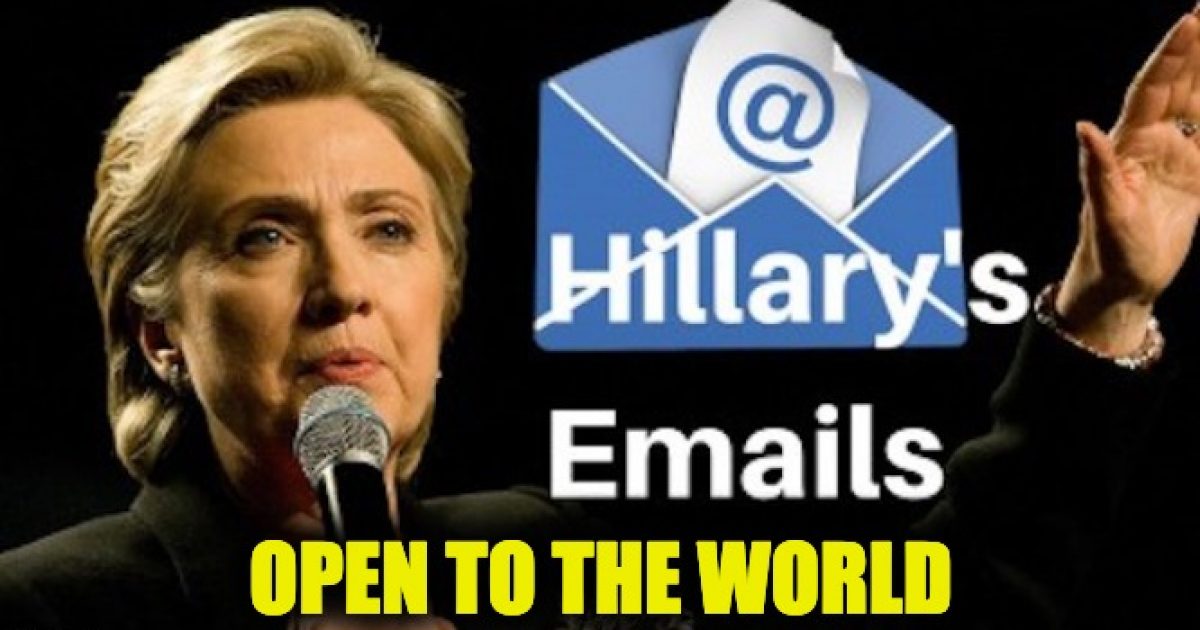 Despite the nation repeatedly telling her to go away, Hillary Clinton remains intent on staying relevant. Although, this type of news isn’t exactly what she was hoping for.

Here’s the scoop from Judicial Watch:

(…)FBI notes of an interview with an unidentified Platte River Networks official in February 2016 (almost a year after the Clinton email network was first revealed) show that Platte River “gave someone access to live HRC archive mailbox at some point.” The same notes show that an email from December 11, 2014, exists that reads “Hillary cover up operation work ticket archive cleanup.” The interviewee said that the “cover up operation” email “probably related to change to 60 day [sic] email retention policy/backup.” The subject indicated that he didn’t “recall the prior policy.” The notes also indicated, “[Redacted] advised [redacted] not to answer questions related to conv [conversation] w/DK [David Kendall] document 49 – based on 5th amendment.”

In July 2016 Hillary Clinton said on Meet The Press, she never received nor sent any material that was marked classified” on her private email server while she was secretary state.  But in June 2015 a sender whose name was redacted sent an email to State Department Official Margaret “Peggy” Grafeld warning about the volume of classified information in the emails sent through Hillary’s server.

While working with this inspector, I have personally reviewed hundreds of documents in the HRC collection. I can now say, without reservation, that there are literally hundreds of classified emails in this collection; maybe more. For example, there are comments by Department staff in emails relating to the Wikileaks unauthorized disclosures; many of the emails relating to this actually confirm the information in the disclosures. This material is the subject of FOIA litigation, and the emails will now have to be found, reviewed and upgraded. Under the EO 13526, it would be in our right to classify the entire HRC collection at the Secret level because of the “mosaic effect.” While there may be IC equities in the collection, I am very concerned about the inadvertent release of State Department’s equities when this collection is released in its entirety — the potential damage to the foreign relations of the United States could be significant.

And yet, years later, there is still zero proof the Trump campaign colluded with the Kremlin to defeat Hillary Clinton in 2016.

However, the evidence against the Hillary Clinton campaign continues to mount.

A senior member of Ukraine’s Prosecutor General’s International Legal Cooperation Dept. told John Solomon that since last year, he’s been blocked from getting visas for himself and a team to go to the U.S. to deliver evidence of Democratic party wrongdoing during the 2016 election to the DOJ.  The senior prosecutor Kostiantyn Kulyk never got an answer, and he says it’s because the visas were blocked by the U.S. Ambassador.

“Judicial Watch uncovered new ‘cover-up’ records on the illicit Clinton email system that further demonstrate the sham nature of the FBI/DOJ ‘investigation’ of her, These shocking new documents show that various Obama agencies were protecting Hillary Clinton from the consequences of her misconduct. It is well past time for the DOJ to stop shielding Hillary Clinton and hold her fully accountable to the rule of law.”

This is all another brick in the wall indicating that Hilary Clinton was recklessly negligent in her handling of America’s secrets by using a private email server and that James Comey was covering up the truth when he announced the FBI would not recommend a Clinton prosecution.