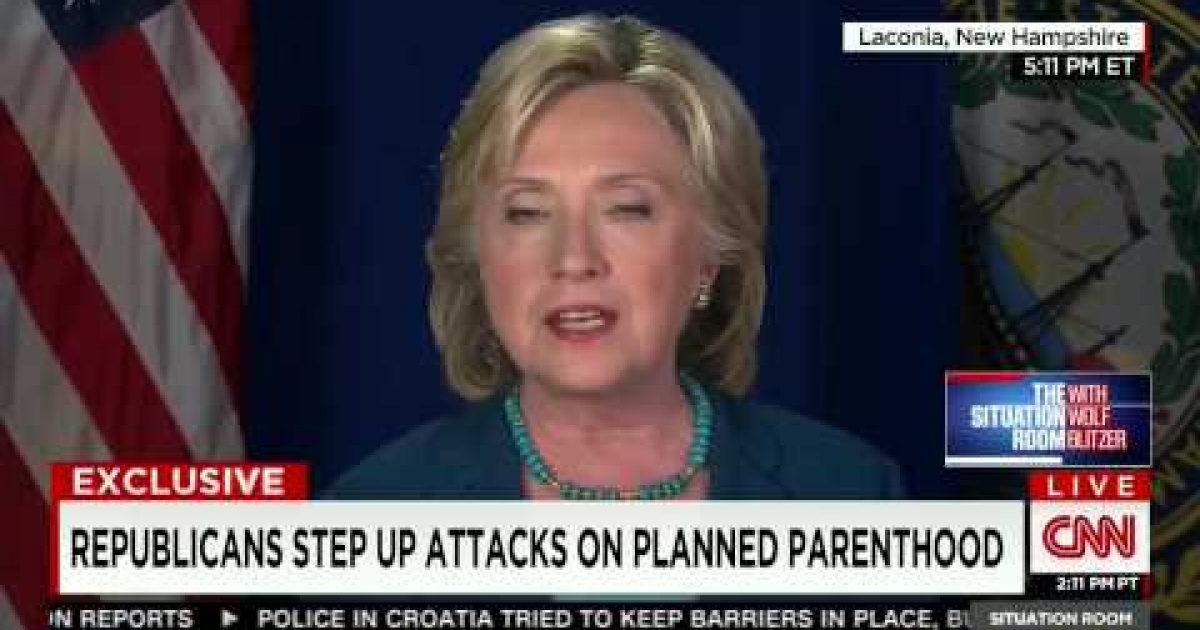 In one of the most dramatic moments of the CNN debate on Friday Carly Fiorina challenged President Obama and Hillary Clinton to watch the videos of Planned Parenthood selling pieces of aborted babies.

“As regards Planned Parenthood, anyone who has watched this videotape, I dare Hillary Clinton, Barack Obama to watch these tapes. Watch a fully formed fetus on the table, it’s heart beating, it’s legs kicking while someone says we have to keep it alive to harvest its brain. This is about the character of our nation, and if we will not stand up in and force President Obama to veto this bill, shame on us”

On CNN Thursday, Wolf Blitzer asked Ms. Clinton if she saw the videos…Hillary droned on about how wonderful Planned Parenthood was, how it helps women, how abortion is legal…basically everything but answering the question.

Blitzer: All right. Planned parenthood says that video doesn’t — Madame secretary. I want to explain Planned Parenthood says the video doesn’t depict an aborted fetus. They say that was from a miscarriage had nothing to do with planned parenthood. This is an organization you support. First of all have you seen those very, very controversial videos?

Clinton: Well, Wolf, let’s break down what’s happening here. Because I think it’s important. I know that there’s a move on by some of the republicans in the congress to actually shut down the United States government over their demand that we no longer give federal funding to planned parenthood to perform the really necessary health services they do for millions of women. So let’s put aside for a moment here that there is no debate and there should be absolutely no argument that Planned Parenthood does cancer screenings, it helps provide family planning and contraceptive advice. It works to provide, you know, some of the most difficult kinds of counseling when it comes to giving an HIV test, for example. What this is about is the fact that some of the Planned Parenthood facilities perform abortions, which is legal under the laws of the United States. I understand that the Republican Party and particularly the candidates we heard from last night wish that were not the case. Wish that abortion were illegal and they could turn the clock back. So i think we ought to be very clear that Planned Parenthood has served to provide health care, necessary health care, for millions of women. And I think it deserves not only our support but the continuing funding from the federal government so that these women and girls who are seeking the kinds of services that are provided will be able to achieve that.

After she droned on for a while Blitzer asked another question:

Blitzer: Are you confident that Planned Parenthood, madame secretary, or any of its affiliated groups if you will haven’t violated any federal laws?”

Hillary tap-danced around that one also.

Clinton: Well, Wolf, let me tell you what I know. And that is there is a willingness on the part of Planned Parenthood to answer questions. They have been doing so. Some people may not want to hear the answers, but they have certainly put those answers out there into the public arena.

And if the issue, the core issue that some on the stage last night or some in the Congress are trying to promote or trying to raise questions about, has to do with the kind of research that is done legally in the United States. Then that is an issue that goes far beyond any Planned Parenthood example.

So I think it’s important to sort out. There’s a lot of emotion. There’s a lot of accusations that are being hurled about. I think it’s important to sort out and try to actually figure out what is going on. If it’s the services they are trying to shut down, like providing family planning or breast cancer screenings, that is just wrong. And women deserve to be given support to get those services provided.

If they want to shut down the legal provision of abortion services, then they’ve got a bigger problem because obviously Planned Parenthood does not use federal dollars to do that. And if they are more focused on the research that is going on, then that’s a set of issues that certainly is not only about Planned Parenthood. So I would hope that the Republicans and particularly the Republicans in the House led by Speaker Boehner would not put our country and our economy in peril pursuing some kind of emotionally, politically charged partisan attack on Planned Parenthood to shut our government down.”

Hillary was obfuscating because she didn’t watch the horrible videos which treats once-living humans like a commodity to be bought and sold for profit. Why hasn’t Ms. Clinton watched the videos? Perhaps she believes they contain confidential United States information like her emails. The bottom line is that Mrs. Clinton can go on and on about how wonderful Planned Parenthood is while attacking as false, videos she never saw. That is the Clinton way.