Hillary Clinton: The Solution To Terrorism Is To “Understand” Muslim Food 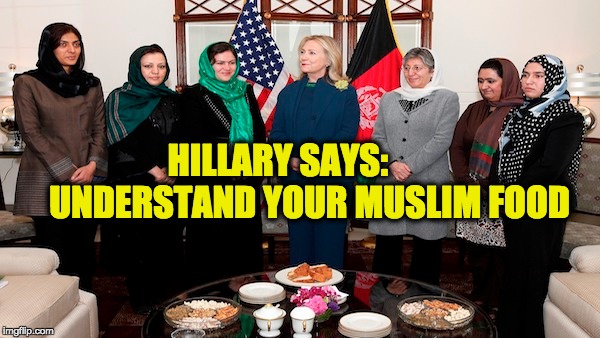 The most infamous of these tactics was popularized by former U.S. President Barack Obama whose master plan for ISIS and their vile cronies was to ignore them.  When the former democratic deity was forced to confront the Islamic terror threat, he did so by lamely insulting those who were waging war on all non-Muslims, calling them “desperate” and claiming that their attacks were indicative of an organization “on the run”.

Now, the once-apparent heir to the Obama throne, Hillary Clinton, has come forward with her own asinine theories on how best to combat jihadists, and they are no better than those of her former boss.

“The defeated presidential candidate told a fundraiser for a youth program that the best way to stop terrorism was to ‘understand’ other cultures and their food.

“Clinton said that Khan, who has called for Donald Trump to be banned from entering the UK for a state visit (while actual terrorists from Syria are free to return), had shown ‘steady, determined leadership’.

“Hillary said the best way of combating terror was to ‘reach out to the world’ in order to ‘understand’ people living in foreign countries.

“’Getting to know one another. Learning about the experiences, the lives, the cultures, the religions, the food,’ she added.”

I will make a deal with the 2016 presidental race loser—when Muslim food starts talking to me I will do my best to understand it—as my family drives me to the nearest insane asylum.

This hands-off approach to terrorism has been thoroughly proven ineffective and dangerous over the course of the last 8 years, as vigilance around the globe waned in light of Obama’s shortsighted attitude toward the violence inherent in radical Islamic teachings.

Now, the world faces an even more concise and powerful terror threat, as globalist powers continue to push their open-border world policy, allowing middle eastern migrants to slip in and out of European nations without so much as an enhanced background check.  It seems obvious that ISIS and their ilk would exploit this newfound freedom to position their caliphate troops around the globe, yet few nations are willing to step up their national security.  Terror groups have openly admitted to using the Syrian refugee crisis to conduct operations abroad, yet, still, nothing is done to salvage what’s left of the security of nations such as France, Germany, and England.

No, Hillary, there is no “understanding” that will release the planet from the grip of these religiously motivated terrorists.  What they desire is a world, kneeling to them and to Islam, in which Christianity and other religions disappear.

That’s as much about radical Islam as anyone needs to “understand.”