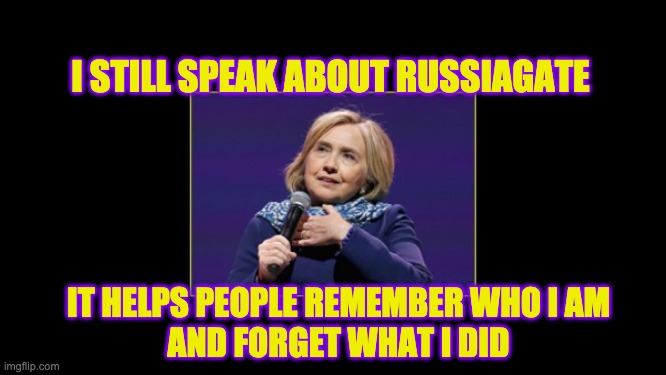 Nearly five years after Hillary Clinton brought the word “collusion” to the mainstream of American culture, she’s taking the RussiaGate theory back out for one last lap around the track.

During one of the 2016 presidential debates, Clinton first posited the possibility that Donald Trump was some sort of Russian double agent.  A Putin operative who was either in lock-step with the Kremlin, or what some described as a “useful idiot.”

Clinton’s assertions spread, and soon we had Special Counsel Robert Mueller burning through $25 million over the course of 22 months, trying to make sure that everything was on the up-and-up.  At the end of that investigation, there were no charges for President Trump – something the Commander in Chief has boated about frequently.

Even now, as Trump is preparing to depart the White House for sunny Mar-a-Lago, Clinton is dredging up the subject on her podcast.

“We learned a lot about our system of government over the last four years with a president who disdains democracy and, as you have said numerous times, has other agendas,” Clinton said.

“What they all are, I don’t think we yet know. I hope historically we will find out who he’s beholden to, who pulls his strings. I would love to see his phone records to see whether he was talking to Putin the day that the insurgents invaded our Capitol,” Clinton continued, also placing blame on Trump’s “enablers,” “accomplices,” and “cult members” — a likely reference to his supporters, whom she famously referred to as “deplorables” during her 2016 campaign […]

Clinton would go on to spend time later in the podcast pondering the idea of a 9/11-style commission to study the attack on the Capitol on January 6th.

In 2016 the CIA asked the FBI to investigate whether the Clinton campaign had approved a plan to distract from her email troubles by “stirring up a scandal” claiming the Russians were interfering with the election to help candidate Donald Trump. John Brennan even briefed President Obama on the matter.  The CIA wasn’t sure the information was true, as the FBI ignored the request and started to investigate Trump. That’s why Hillary is still pushing the Russia hoax. It keeps people away from looking at her email scandal.