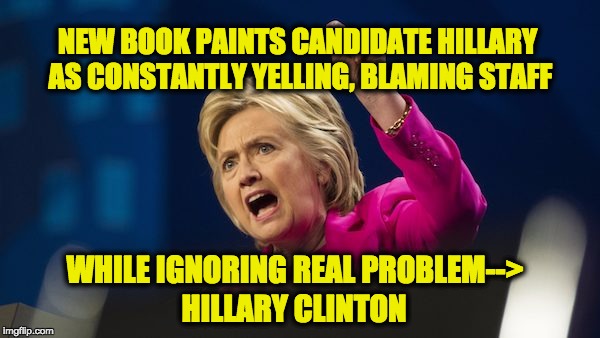 Hillary Clinton was ‘so mad she couldn’t think straight’ after being humiliated in the Michigan Democratic primary.

The failed Presidential candidate attacked her aides with a ‘potent mix of exhaustion and exasperation’ after the embarrassing loss to her rival Bernie Sanders in March last year.

Clinton’s top staff said she was ‘visibly, unflinchingly p***ed off at us’ and blamed them for making her look ‘vulnerable’.

During another tirade this one bashing the staff because they weren’t able to bury the stories about his wife’s email server,  former President Bubba Clinton took over and gave aides an “a** chewing” on the phone and told them to “do their d**n jobs”.

Hillary came back on the line to close the lecture. It was hard to tell what was worse — getting hollered at by Bill or getting scolded by the stern and self-righteous Hillary. Neither was pleasant. You heard him, she admonished. “Get it straight.”

The details of the hollering showcased the tensions at the top of Clinton’s presidential campaign a campaign that was quick to blame others for its own mistakes.  After all it was never supposed to be this close. She was supposed to win. Hillary’s 2016 election loss isn’t the story of a FBI director’s inopportune announcement timing or even Russian interference, any analysis of her loss has to start with main problem of Ms. Clinton’s campaign —> Hillary Clinton, and a campaign that seemed as if it wasn’t trying to win…instead, it was trying not to lose.

Politico reporter Jonathan Allen and White House correspondent for the Hill, Amie Parnes detail the have written an unflattering tome on the doomed campaign called,Shattered: Inside Hillary Clinton’s Doomed Campaign. The book tells the story of the 2016 candidate who couldn’t lose, but did.. Based on the excerpt in The Hill this was a campaign that was fighting among themselves so much, that they couldn’t shoot straight when they tried to fight Donald Trump

“She’d been humiliated in the Michigan primary the night before, a loss that not only robbed her of a prime opportunity to put Bernie Sanders down for good but also exposed several of her weaknesses. How could she have been left so vulnerable? She knew — or at least she thought she did. The blame belonged to her campaign team, she believed, for failing to hone her message, energize important constituencies and take care of business in getting voters to the polls. And now, Jake Sullivan, her de facto chief strategist, was giving her lip about the last answer she’d delivered in the prep session.

The comment was pointed and sarcastic, but she meant it. So for the next 30 minutes, there he was, pretending to be Hillary while she critiqued his performance.

Every time the Yale lawyer and former high school debate champ opened his mouth, Hillary cut him off. “That isn’t very good,” she’d say. “You can do better.” Then she’d hammer him with a Bernie line.

It wasn’t just Sullivan in her crosshairs. She let everyone on her team have it that day. “We haven’t made our case,” she fumed. “We haven’t framed the choice. We haven’t done the politics.”

“She was visibly, unflinchingly pissed off at us as a group,” said one aide who was in the room for the humiliating scene. “And she let us know she felt that way.”

A Hillary attack on her staff (or Bubba’s)  is nothing new.  She’s been known to lambast those closest to her frequently, sometimes pushing the boundaries of decorum. Because it is always their fault. In 1974, Bubba lost an election for one of the US House of Representatives seat from Arkansas. After the defeat, she turned to her then boyfriend’s campaign manager Paul Fray and called him a “f**king Jew b*stard.”

That’s Hillary, yell first, blame others second, and think later. The picture of Hillary Clinton painted by the authors is of a de-motivating screamer who really couldn’t manage a campaign, thank God the best person won because if she can’t manage a campaign staff she certainly cant manage a country. The full book will be available on Tuesday April 18th.