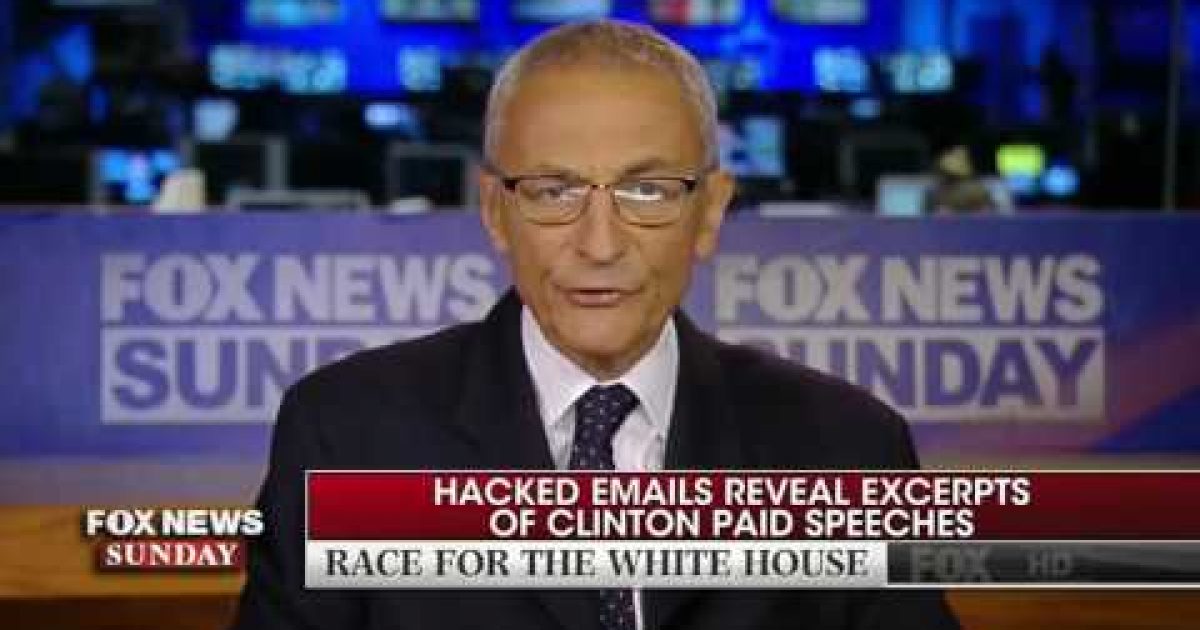 According to the WikiLeaks release of Hillary Clinton campaign head, John Podesta’s emails, Hillary Clinton said behind closed doors at a paid speech, that in order to be “successful, politically” you need to have “both a public and private position” on public policy. But on Fox News Sunday, Podesta acted as if those emails never existed.

“You just have to sort of figure out how to — getting back to that word, ‘balance’ — how to balance the public and the private efforts that are necessary to be successful, politically, and that’s not just a comment about today. That, I think, has probably been true for all of our history, and if you saw the Spielberg movie, Lincoln, and how he was maneuvering and working to get the 13th Amendment passed, and he called one of my favorite predecessors, Secretary Seward, who had been the governor and senator from New York, ran against Lincoln for president, and he told Seward, I need your help to get this done. And Seward called some of his lobbyist friends who knew how to make a deal, and they just kept going at it. I mean, politics is like sausage being made. It is unsavory, and it always has been that way, but we usually end up where we need to be. But if everybody’s watching, you know, all of the back room discussions and the deals, you know, then people get a little nervous, to say the least. So, you need both a public and a private position. And finally, I think — I believe in evidence-based decision making. I want to know what the facts are. I mean, it’s like when you guys go into some kind of a deal, you know, are you going to do that development or not, are you going to do that renovation or not, you know, you look at the numbers. You try to figure out what’s going to work and what’s not going to work.”

Perhaps John Podesta doesn’t read his own emails, or he lies as much as Hillary because on Fox News Sunday he said “There’s nothing she hasn’t said in private that she doesn’t say in public.”