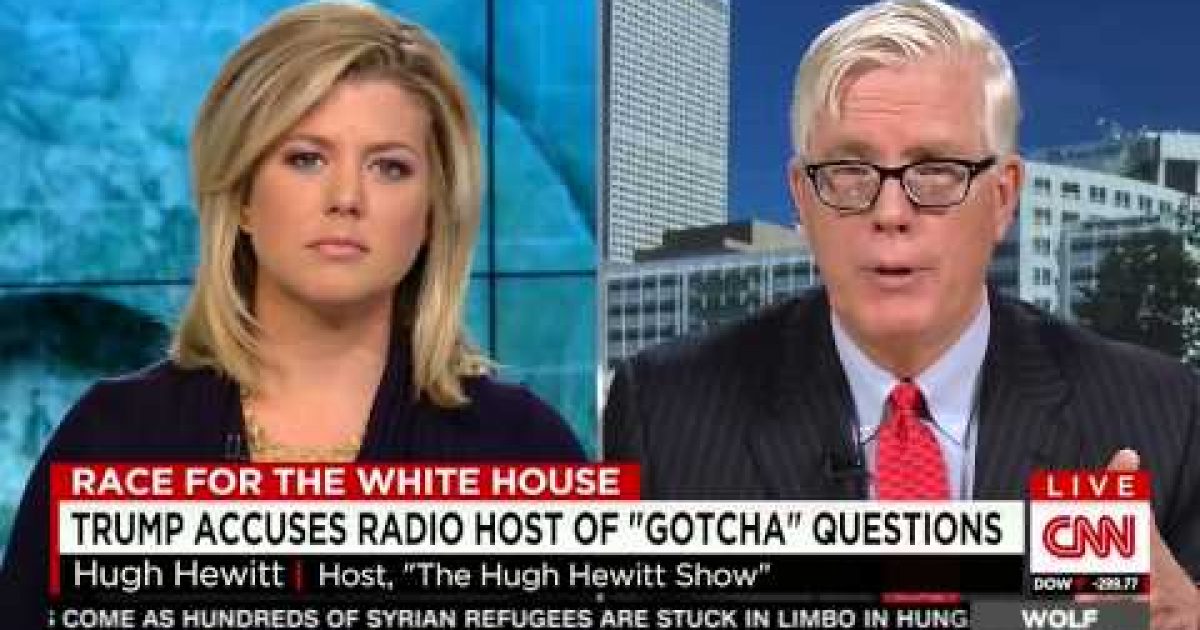 After last night’s interview by Hugh Hewitt, Donald Trump again proved that he is a crybaby not qualified to be president. Not because he didn’t know the answers, but because of his lashing out at the radio host.

Near the start of the Trump/Hewitt interview, the host asked some foreign policy questions that anybody running for Commander-In-Chief should know. He asked about one of our country’s big enemies Iranian General Soleimani the leader of the Quds forces. He didn’t ask do you know who the leader of the Quds forces was? He was asking if Soleimani behavior is going to change as a result of this deal with Iran?

Trump first said he was familiar with Soleimani and when Trump seemed like he didn’t know who Soleimani was, Hewitt told him, when Trump thought said he heard Kurds not Quds Hewitt accepted that and went on.

If the name Soleimani sounds familiar because just a few weeks ago he was huge news because he visited Russia despite the fact that U.S. sanctions ban him from leaving the country. Not only was it a violation of the sanctions but a violation that was tied into the selling of the P5+1 deal.  It was top news at all the major newspapers.  Even if Trump wasn’t running for POTUS he probably should have known about him.

Later in the interview, Hewitt mentioned senior figures Hezbollah, Hamas, and al-Nusra. Again Trump also felt questions about those leaders, which every presidential candidate should know were ridiculous “gotcha” questions.

Just as he did when Megyn Kelly asked him a valid question about some of his misogynist statements Trump lashed out at the interviewer. On Morning Joe this morning, the Washington Post‘s David Ignatius asked a question which led Trump to the opportunity take a jab at Hewitt.

“And by the way, when you say Quds vs. Kurds, I thought he said Kurds, this third-rate radio announcer that I did the show [for]. It was like ‘gotcha, gotcha.’ Every question was, do I know this one and that one. You know, he worked hard on that. I thought he said Kurds,” Trump said. “By the way, I do think the Kurds, while we’re on it, I do think the Kurds are not being utilized properly and not being treated properly by us.”

Hewitt who is a gentleman told Politico:

“DT has been my guest four times in the past 30 days and I hope he keeps coming back,” Hewitt said, referring to Trump. “Best interview in America. But I won’t change my debate prep or question set because of his or others critiques or praise. I ask questions that I think many GOP primary voters are interested in, whether of DT or all the other GOPers. Others interviewed this week include Christie, Graham, Huckabee, Rubio and Walker as well as Fiorina twice. They all get tough questions with some overlap and some new ones each time.”

Last night’s interview was the 16th time Hewitt interviewed Trump, by now he knows that Hugh doesn’t do gotcha questions (Okay he does one which I will explain later). As a regular listener of the program, I can tell you the guy is one of the best interviewers I have ever heard, not because he does the gotcha thing but because his style is more like the soft spoken country lawyer.  Hewitt is always the gentleman. In fact if Trump started by saying I don’t know instead of claiming he knew Soleimani, Hugh would have probably taken the time to explain the Quds forces General instead of asking more questions. Instead always the “tough guy” Trump said he knew and lashed out later.

One of the really bad things about Barack Obama is he refuses to accept the fact that he does not know everything and that he could be wrong once on a while.  Trump’s performance last night and his lashing out at Hewitt this morning is just another example that “the Donald” has the same character flaw as Obama.

Many “Trumpsters” complain that in Hewitt’s interview with Carly Fiorina where she answered all the questions Trump thought were gotcha, it was obvious that Fiorina refereed to a cheat sheet to help her answer the question.  To be honest I don’t think so, but even if that was true, if she though to have a cheat sheet—good for her. It just means she realizes that she isn’t an expert on every thing yet, and brings notes when she does a phone interview.  At one point when Trump was talking to Hewitt he said, “I knew you were going to ask me things like this.” So the real question should be why didn’t Trump have a cheat sheet?

The reason is just like Barack Obama, it is never about America, it’s about himself. And any interviewer who asks a tough question, or something he doesn’t know is attacking Trump personally. Should he get elected (God Forbid), Trump will be a president just like Obama, no discussion, I know everything and I am always right.

Oh and Hewitt’s gotcha question, “Do you believe Alger Hiss was a communist?”

Update: Hewitt was just on CNN to answer questions about the trump interview-watch the video below:

The Debate: Two Against One for Trump – Lying and Denying for Biden
September 30th, 2020 TCP News

Parrots removed from UK family safari park after teaching each other to swear — and laughing about it
September 30th, 2020 Liberty Unyielding

Another Hollywood celebrity, Jeff Daniels, declares war on Trump supporters, says there needs to be more hate
September 30th, 2020 DC Dirty Laundry
Thanks for sharing!
We invite you to become a Lid insider. Sign up for our free email newsletter, and we'll make sure to keep you in the loop.
Send this to a friend