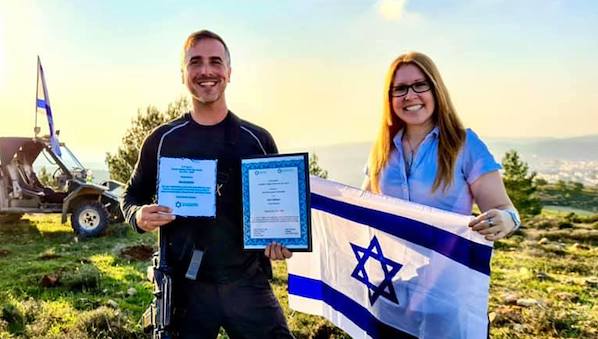 On Sunday,  December 20, 2020, on behalf of World Herut and Herut North America, Lauren Isaacs, Director of Herut Canada, presented the 2nd Annual Ari Fuld Z”L Zionist Activist of the Year Award for 5781 / 2020 to Ben Goldstein, Director of Unity Warriors and social media personality.  The event took place in the Hills of Judah, overlooking Jerusalem, and was live-streamed on Facebook.The Ari Fuld Z”L Zionist Activist Of the Year Award was established in 2019 by World Herut with the Fuld family’s blessing and is presented each year to an outstanding pro-Israel organizer who has made a significant impact on Zionist education and demonstrated commitment to the well-being of the Jewish People. Herut’s award committee’s decision to honor Goldstein was not only immediately obvious but also unanimous.

“Zionism is action!” are the words that Goldstein passionately proclaims in many of his social media videos to inspire others to stand up for what is right; to stand up to defend Eretz Yisrael, Am Yisrael, and to encourage Aliyah.  And Goldstein means what he says. He is the personification of an Unapologetic Zionist. Goldstein, who grew up in Memphis and made Aliyah in 1996 when he was a lone soldier in the Givati combat brigade in the IDF, rarely sleeps because he feels the weight of Israel’s security and reputation on his shoulders every moment of every day. The time he isn’t spending with his family, he is showing and educating people worldwide about the truth and reality of Israel and the Jewish people via his social media videos. Before COVID-19 restrictions, he personally showed thousands of people the beauty and history of the Land via his Goldstein Experience. Goldstein also uses social media to inspire thousands of people with his weekly Torah teachings and regular prayer sessions at the Kotel. Goldstein is a trained security expert. He voluntarily and tirelessly risks his life at all hours of the day and night, patrolling the Gush Etzion area of Judea to protect the families of his and the surrounding yeshuvim (Jewish communities) from terrorist attacks. And as if he weren’t busy enough, he has spent the past six years dedicating much of his time, energy, and soul to building the grassroots organization Unity Warriors to the international success that it is today. The Unity Warriors website can be found at https://unitywarriors.com.

Goldstein established Unity Warriors in 2014 during Operation Protective Edge to utilize “unity funding,” which is pooling the donations he receives to directly provide social welfare support to IDF soldiers and equip medics, paramedics, and civilian security team members in Judea, Samaria, and the Gaza border, with upgraded emergency medical supplies and safety equipment.  Goldstein is known for his personal and passionate videos, so he often will send ‘thank you’ videos to Unity Warriors’ donors, so they can literally see exactly how and where their donations were used.

Goldstein knows that Zionism also means redeeming and settling the Land, and that’s exactly what he does with Unity Warriors. This past September, Goldstein planned a “Roots of Redemption” event and received donations to plant over 200 trees and to install a watering system in Judea, across from Bethlehem. However, this event was only the beginning; he is currently planning another event, even bigger than the last, where Unity Warriors will offer another opportunity for supporters to donate 400 fruit trees in the Hills of Judah. Goldstein says, “This event will not only allow people from all over the world to literally plant their roots in the Land, but it will also be a magnificent crown jewel of what the hills of King David, the hills of Judah should look like.

Ari Fuld Z”L, also known as “The Lion of Zion,” was murdered by a Palestinian Arab terrorist in 2018, and he was not only an exceptional husband, father, and friend but was also a passionate Zionist and defender of Israel, Torah and the Jewish people, and a friend of Goldstein’s.

During the ceremony, Goldstein appropriately surprised the viewers when he and Isaacs planted an olive tree sapling in Ari’s memory. Goldstein emotionally recalled, “I was zoyche (worthy) to be there at his last moments.  And you have to ask yourself why are you over Ari when he is going to the greatest realms of Heaven. Of all the people in the world, I happen to show up at that attack, right at the scene. I don’t know the reason for it yet. But what I do know is that if each and every one of us… forget about me, I’m a nothing…if each and every one of us doesn’t encapsulate what it means to be what was extinct here. The lions used to roam these hills. We have to bring the lions back to who we are as Jews. We have to do it with a roar. So loud that our own people are woken up. Forget about our enemies. What they fear most is our unity. What they fear most is the life that we’re about to put into this Land. So, Ari, we’re doing this for you!”

Due to COVID-19 limitations, Karma Feinstein Cohen, Executive Director of World Herut, could not attend the ceremony in person. However, she expressed her gratitude towards Goldstein, saying after the ceremony, “Herut North America and World Herut are so very proud to be honoring Ben Goldstein with the Ari Fuld Z”L Zionist Activist of the Year Award, especially because Ben is so connected to Am Yisrael and Eretz Yisrael. When I say Eretz Yisrael, I mean the physical Land itself. What he did in the video [planting an olive tree sapling in Ari Fuld’s memory] was absolutely beautiful and was an expression of my inner belief that part of our healing as a Jewish people is becoming a productive people. And part of being a productive people is planting and cultivating the Land. Our connection to the Land has been spiritual for 2,000 years before the establishment of the State, so cultivating and working the Land creates a physical bond with the earth, with the Land itself, and it is so much stronger when it’s put together with the spiritual bond of the Land. So, the surprise that Ben had for us when he planted the olive tree just shows even more so that we picked the most perfect person to receive the award this year.”

Lauren Isaacs captured the spirit of the event when she said, “We [Herut] are proud to cooperate and collaborate with Ben Goldstein and Unity Warriors. Together, in unity, we will continue to educate and spread the truth about Israel and the Jewish people.”

Lisa Koenig is the North East Director, Herut North America. Herut is an international movement for Zionist pride and education and is dedicated to the ideals of pre-World War II Zionist leader Ze’ev Jabotinsky. (Jeff Dunetz is an active member of Herut and invites his readers to join him) Herut’s website is https://herutna.org/

A video of the ceremony is embedded below: