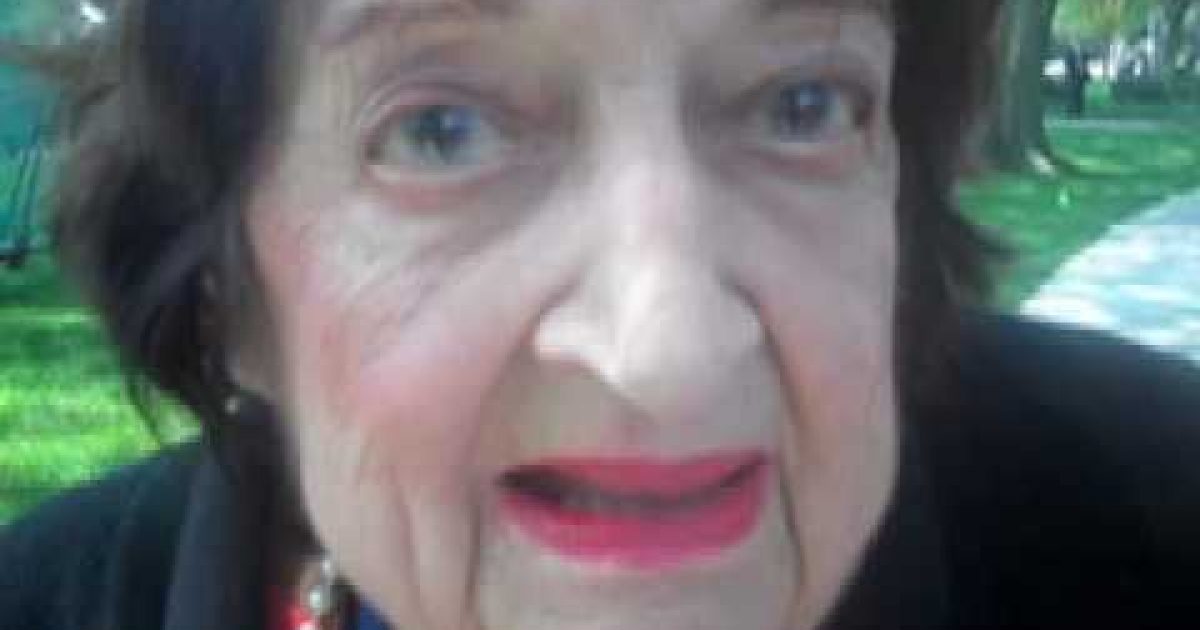 My “association” with Helen Thomas began a Friday, a month longer than three years ago when my friend Rabbi David Nesenoff sent me a video which contained a short explosive interview he had conducted with Helen Thomas. There on tape the veteran White House correspondent gave a statement that many people (including me) saw as telling the Jews to go face another Holocaust. That was probably one of the more pleasant things Thomas has ever said about Jews.

On the call David asked me if there was anything I could do with the video. He had already offered it to the mainstream media and even The Jewish Week, a weekly progressive newspaper for the Jewish community. Taking up David’s challenge, I guaranteed the video would have a half a million hits before he turned on the computer again after the Sabbath (I was wrong–it was over 750 thousand).

I quickly posted it on my site The Lid, wrote it up for Big Journalism, gave it to Scott Baker (who at the time was running   Breitbart TV , and sent out tweets and emails to most of the large sites. Before I left on a five hour car ride to my brother’s house for the weekend the video was posted on the Big sites and as a banner Drudge headline.

By the time I arrived in Maryland the  same video they had rejected a few days earlier was dominating the headlines of the mainstream media .

In the three years since,  Thomas,  unencumbered by a “front line” media job  made new anti-Semitic comments, but her colleagues in the media protected her by claiming her slanders were political, not hateful. Their claim is that she wasn’t anti-Semitic, but simply anti-Israel—a dangerous affront to the truth.

One of the site’s initial honorees was Ms. Thomas. In their chronology of her career the site reported:

Helen Thomas was a trailblazer in journalism and in the White House press corps, covering presidents from John F. Kennedy through Barack Obama.

Starting with the Kennedy administration, she was the first woman to cover the president and not just the First Lady.

At her urging in 1962, Kennedy said he would not attend the annual dinner of the White House Correspondents Association unless it was opened to women for the first time.  It was.
And in 1975-76, she served as the first woman president of the association.

Women and men who’ve followed in the press corps all owe a debt of gratitude for the work Helen did and the doors she opened. All of our journalism is the better for it”

I wonder when David Duke dies, will the mention his membership in the KKK?

The mainstream media continues to whitewash Ms. Thomas’ statement as about the “Israel- Palestinian conflict.” That is a lie.

If making false and slanderous statements regarding Israel was a crime that lead to termination, the NY Times newsroom would be empty, Peter Jennings would have been sent home by ABC to live with his former lover/Palestinian Authority Official Hanan Ashrawi and Mike Wallace would have been ousted from 60 Minutes decades before his death. Heck even in Israel you don’t get fired for being anti-Israel (have you ever read the Israeli paper Ha’aretz?).

What I hadn’t counted on after story broke was,  how much the mainstream media loved and wanted to protect Ms Thomas. Within a few days of the original post, David was being slandered by Mediaite, Juan Cole was accusing me of selectively editing the video (and other affronts to Ms Thomas) causing Helen Thomas to resign under fire.

If you want more proof of Helen Thomas’ hatred, then examine what she said since her “resignation.”

That was the nicest thing Thomas said all night. In her speech about discrimination against Arabs she blamed it on the Jews, launching into an anti-Semitic tirade about how those rich Jews control America (video embedded below).

After her stint at the anti-Bias conference, Thomas wasn’t through . In March 2011 Playboy interviewed her

When asked by the interviewer if she had a personal antipathy toward Jews themselves Thomas labeled the Jews as Arab-haters and denied they had an historical connection to the Jewish State
She made some renewed claims about the worldwide “Jewish” conspiracy a little later in the interview.

Chicago Sun Times columnist Michael Sneed once wrote an item about Ms. Thomas’ reciept of an award from the PLO:

The turn of the screw: Veteran White House reporter Helen Thomas, 91, who was forced into retirement after making incendiary remarks about Israel

The media doesn’t understand that there is a difference between being anti-Semitic and anti-Israel, Thomas happened to have been both.  It is entirely reasonable to disagree with Israel’s polices and here’s why— but once you complain of an Israeli lobby that runs the world, belittle the Holocaust and the suggest that the Jews are not really the Jews, like Helen Thomas believe that person is a hater.

The media’s continued protection of Helen Thomas comes from from the media desire to protect fellow progressives (the same way they continue to protect Al Sharpton). Backing Ms Thomas’ claim she wasn’t being anti-Semitic, but simply anti Israel allows progressives to continue their hateful meme that Jews believe any attack on Israel is Antisemitism.

When Helen Thomas said the Palestinians were there long before any European Zionists, Thomas was was simply being historically inaccurate and biased against Israel.

But when she said the media Congress, the White House, and Hollywood, Wall Street are owned by Zionists, Thomas was using traditional anti-Semitic libels straight out of the Protocols of the Elders of Zion.

Helen Thomas died on Saturday; she will be celebrated by the mainstream media as a trailblazer. I will always remember for the hater she was, and am honored that my friend Rabbi Nesenoff asked me to help expose her for what she really was— a vicious anti-Semite.