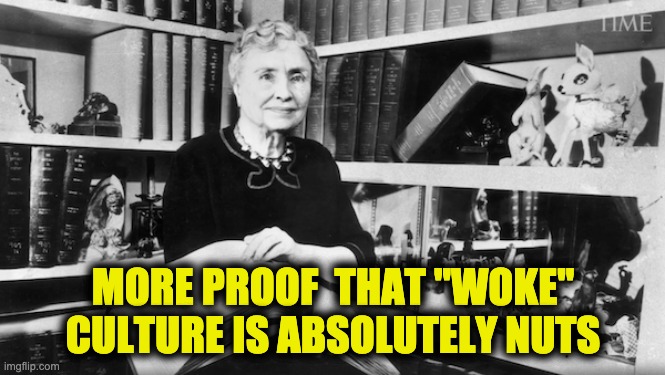 Need more proof that the “Woke” culture is absolutely nuts?

To some Black disability rights activists, like Anita Cameron, Helen Keller is not radical at all, “just another, despite disabilities, privileged white person,” and yet another example of history telling the story of privileged white Americans.

She can’t be serious. We’re talking about Helen Keller, who lost her sight and hearing and as an infant and in childhood was written off by her parents as incapable of learning. Through grit and perseverance, the same Hellen Keller learned to read and write and eventually graduated from Radcliffe College (now Harvard University). Keller is an icon for all Americans because she is a testament to the fact that every human being has value and should be judged based on what they can do, not on what they cannot do.

We will not stand idly by as the Left continues to denigrate, dismiss, and destroy our historic and cultural icons such as Helen Keller.

Neil Romano chairs the National Council on Disability, an independent federal agency charged with advising the President, Congress, and other federal agencies regarding policies, programs, practices, and procedures that affect people with disabilities.  Romano said he’s shocked by this criticism of Keller.

“A person who is blind and cannot hear and literally invented the way for that person to be able to communicate with the world, I would hardly consider that person privileged,” Romano said.

Romano said Keller’s value to America is “tremendous” because she showed others with disabilities what was possible.

“Certainly, Helen Keller is the gold standard for saying a person with even the most difficult and severe disabilities can achieve,’” Romano said. “We should all open our eyes, like Helen Keller opened our eyes, to what all Americans and all people can do when given the opportunity.”

Romano has struggled with dyslexia his entire life and knows what it feels like to be written off.

“I had such serious dyslexia that my high school guidance counselors wouldn’t let me take the SATs because they said it would hurt my personal self-image and so on because I would score so poorly,” Romano said. “They also told my parents not to let me go to college because they said that I would not achieve. They actually slated me to become a baker. Four years later, I graduated from New York University with honors and Phi Beta Kappa.”

Romano said despite his academic success, he was forced to start his own business because employers wouldn’t hire him because of his dyslexia. Many years later, President George W. Bush appointed him assistant secretary of Labor for Disability and Employment policy.

Romano credits Keller with leading the way for the tremendous gains we’ve made in the past half-century toward opening opportunities for people with disabilities. Still, he said, much work remains to be done.

He would like to see Congress repeal a little-known section of the Fair Labor Standards Act, Subsection 14-C, which allows persons with disabilities to be paid less than minimum wage. “Over 300,000 Americans today are literally earning $35 to $50 for a 40-hour paycheck,” Romano explained. “It is under the guise of it being training in these programs, and unfortunately, the training in these programs sometimes goes on for up to 50 years without that person ever progressing. That is terrible.”

We agree. That is a message we at Americans for Limited Government can get behind. We recognize we can and must do better for the one in four Americans with a disability. But we will not stand for anyone dismissing the towering achievements of Hellen Keller.