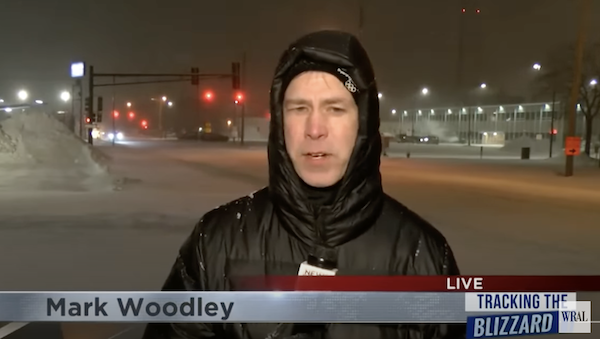 I always wonder why TV stations have someone stand outside during a catastrophic weather event to tell viewers how bad it is and why they should not go inside. Finallly someone who got the weather assignment asks the same question

This sports anchor expected to one day be known for something… he would never have imagined it would be for reporting on the weather.

Mark Woodley, the sports anchor for NBC affiliate KWWL in Waterloo, Iowa, has gone viral for covering the winter storm on Thursday because the station was short-staffed.

Woodley says that he got up at 2:45 a.m. Thursday after getting only around three hours of sleep.

“I was incredibly tired,” said Woodley, which he said may have contributed to his on-air crankiness.

He worked as his own cameraman and filmed the segments 30 feet outside the station’s studio. He’d go into the foyer to warm up when he wasn’t filming.

Woodley said that by the end of his shift, the wires on the cameras had frozen and took a half-an-hour to thaw inside. He then edited the video himself and posted it to his personal Facebook account. Friends and family urged him to post it to Twitter and when he did, it went viral.

This is what you get when you ask the sports guy to come in to cover a blizzard in the morning show. pic.twitter.com/h0RL9tVQqg

His video was retweeted by comedian Josh Gad, who voiced the snowman Olaf in Disney’s “Frozen” movies, and Judd Apatow, producer of “Anchorman: The Legend of Ron Burgundy” starring Will Farrell. Apatow quote tweetd the video with one word: “Legend.”

It’s quite the meteoric rise for a guy that was covering local games and high school sports.

He even made the pages of the Wall Street Journal.

Mark Woodley has done the same job for 20 years. He is a TV sports reporter in Waterloo, Iowa, covering local games and high-school teams. His tweets rarely got more than five likes. His children weren’t impressed with his reporting.

Mr. Woodley shot to internet fame after he posted a 91-second clip on Twitter of himself grumpily delivering the weather report in the wee hours of the morning. “Can I go back to my regular job?” he asked on air.

The video garnered more than 5 million views in a day. Several celebrities retweeted it, including comedian and filmmaker Judd Apatow. Mr. Woodley said his three children are finally giddy their dad is famous, even though he has been on TV their entire lives.

“I thought maybe someday in my life I’d be known for something,” said the 46-year-old, “but crotchety old complaining weather reporter was never on the list.”
Source: Wall Street Journal

His own station, KWWL ran a story about Woodley’s cranky weather report noting, “No Woodley’s were harmed in the making of the morning newscast.”

The weather was pretty awful on Thursday morning in Waterloo registering at -5 degrees Fahrenheit plus wind chills of -40 degrees. That would be difficult to endure for even the most stalwart winter enthusiast. Woodley, a lifelong Iowan accustomed to cold weather, said it was pretty bad.

The viral 91-second clip only shows the snarky side of Woodley’s segments — the rest was serious reporting of the current conditions.

Mr. Woodley wants to make one thing clear: He doesn’t think the storm, which has disrupted travel and caused bitter cold, wind and snow across the U.S., is a joke. The edited clip only showed the grumpiest parts of his reports. Mr. Woodley said he was serious throughout most of his segments.

“Basically what you saw was a movie trailer of a bad comedy, where they put all the funny stuff in the trailer,” he said, “and none of the rest of it was funny.”
Source: Wall Street Journal

So, what’s next for Mark Woodley?

He hasn’t been asked to cover the weather again, but he’s headed to Nashville, Tennessee, to cover the Iowa Hawkeyes as they play in the TransPerfect Music City Bowl on New Year’s Eve.

“Somebody told me it’s going to be almost 65 there,” he said. “I’m really excited about that.”