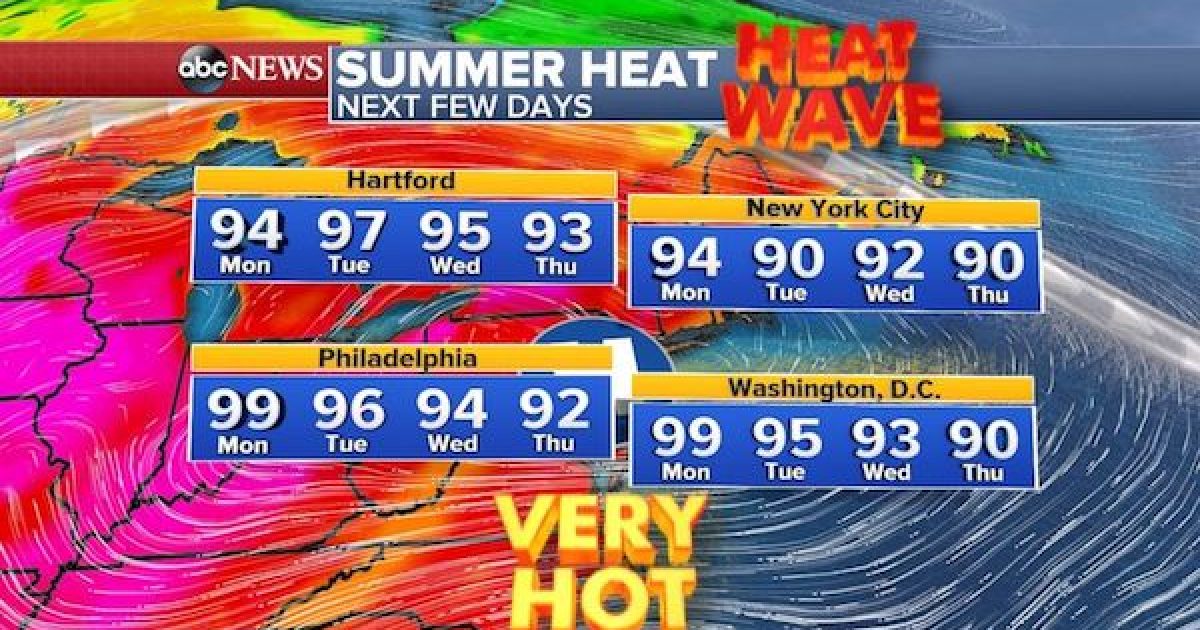 Summers in the U.S. are hot. They always have been. Some are hotter than others. Speaking as a Ph.D. meteorologist with 40 years’ experience, this week’s heat wave is nothing special.

But judging from the memo released on June 22 by Public Citizen (a $17 million per year liberal/progressive consumer rights advocacy group initially formed by Ralph Nader in 1971 and heavily funded by Leftwing billionaire George Soros’s Open Society Foundations), every heat wave must now be viewed as a reminder of human-caused climate change. The memo opines that (believe it or not) the news media have not been very good about linking weather events to climate change, which is leading to complacency among the public.

The June 22 memo focus was on the excessive heat in New York State, so let’s begin our journey down Hysteria Lane there. The official NOAA average maximum temperatures for every June since 1895 in New York look like this:

Fig. 1. Average June maximum temperatures in New York state for every year from 1895 through 2017 (Source: NOAA)

The long-term trend is not statistically different from zero. June 2018 is not yet available at the NOAA website, but from what I’ve seen for the global June Climate Forecast System map at WeatherBell.com, it looks like it was near the long-term (20th Century) average.

When do you suppose the hottest temperature ever recorded in New York was? Clearly, with global warming, it must be in the last 20 or 30 years, right?

What about this week’s heat wave? Let’s look at NOAA’s GFS forecast model 5-day average temperatures for this week (Monday through Friday, July 2-6, 2018, graphic from WeatherBell.com):

As you can see, the excessive heat is regionally isolated, which is precisely what we expect from weather … not for climate change. See those colder-than-average areas? Why aren’t those being blamed on climate change, too? They look like they approximately cancel out the warm sector over the Northeast U.S., which is often the case for weather (not climate change) variations.

That was a 5-day forecast for this week. Next let’s look at what was actually observed over the last couple days (July 1-2), which were very hot in the Great Lakes and Northeast:

What we see is that there were cold temperatures in the western U.S., again an indication of a temporary and localized weather pattern … not “global warming,” which would be warm everywhere.

How about extreme high temperatures in the U.S in general? Here are the yearly total number of days above 100 and 105 deg. F, again for the years 1895 through 2017, based upon official NOAA data:

We see no trend in the number of days with excessive heat.

So, what do we make of the claims in the Public Citizen memo? Well, they mention that we have seen 1.1 deg. C of warming since the Industrial Revolution. Think about that. Less than 2 deg. F warming in about 200 years, part of which is likely to be natural, based upon temperature proxy estimates over the last 2,000 years for the Northern Hemisphere:

Fig. 5. 2,000 years of Northern Hemisphere temperature variations from an average of a number of temperature proxies. The period of substantial human-caused warming is generally agreed to be only since 1950 (U.N. IPCC AR5).

Am I claiming that there is no such thing as human-caused warming? No. I’m arguing that it is overblown. We already know the climate models (which are the basis for proposed changes in energy policy to get us away from fossil fuels) are generally producing twice as much warming of the atmosphere-ocean system as has been observed. The most recent energy budget analysis of surface and deep-ocean warming suggests that the climate system is only half as sensitive to our CO2 emissions as you are being told … maybe 1.5 deg. C of eventual warming from a doubling of atmospheric CO2. At 410 ppm, we are currently half way to doubling.

And even THAT reduced estimate of future warming assumes ALL of the warming is human-caused! If a portion of recent warming is natural, the less the human-caused global warming problem becomes.

Finally, the Public Citizen memo claims that today’s technology would already allow 80% to 100% of our energy to come from renewable sources. This is patently false. Solar and wind are relatively diffuse (and thus expensive) sources of energy which are intermittent, requiring fossil fuel (or nuclear) backup. It would be exceedingly costly to get even 50% of our energy from such sources. Maybe someday we will have such technologies, but until that day arrives, the massive amount of money that would be required to achieve such a goal would worsen poverty, which historically has been the leading cause of premature death in the world.

Roy W. Spencer, Ph.D., is a Principal Research Scientist in Climatology at the Earth System Science Center at the University of Alabama at Birmingham, U.S. Science Team leader for the Advanced Microwave Scanning Radiometer (source of satellite-derived global temperature data) flying on NASA’s Aqua satellite, and a Senior Fellow of The Cornwall Alliance for the Stewardship of Creation.