The Lazy MSM Is Reporting Only Part Of Ukraine-Russia Story 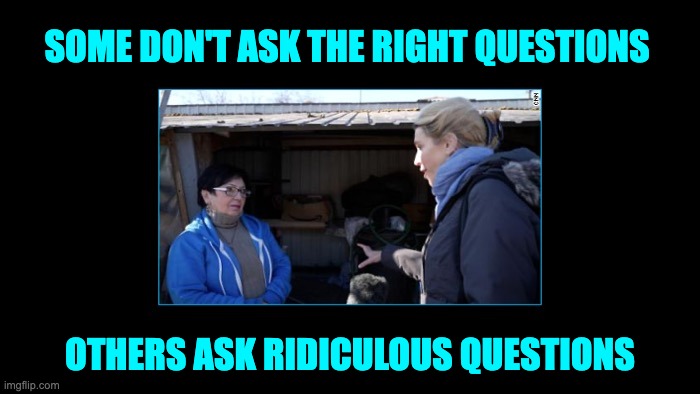 The media coverage of the invasion of Ukraine has been superficial at best. They use adjectives and descriptions without explaining why they are making them. They fail to explain how an analogy they use is related to the Russian invasion of Ukraine and ask stupid questions. the lazy MSM

They correctly label Ukraine President Volodymyr Zelensky as a hero. But what about his background. Those who follow the news know that he was a comedian and actor who once won Ukraine’s version of Dancing With The Stars. Is that what he did his whole life? Was winning a dance competition his qualification for being President? Is the fact that he’s a populist part of why he is staying in Kyiv to fight with the people?

When the media talks about Zelensky, do they mention that one of his first acts as President was to introduce social media to his government and the Parliament? He didn’t implement that change because when he became President in 2019, he knew Russia was coming three years later? His rationale was it helped the government communicate with the people. Now it not only helps that communication but also his lifeline to the outside world.

The media compares Zelensky to Winston Churchill but never explains why. Is it because he smokes fat cigars and has a biting sense of humor? Or was it because when Germany was relentlessly bombing his county at the  height of the Battle of Britain right after their neighbor country, France, fell to the Nazis,  he refused to leave the country and rallied the people with his radio speeches:

The media rarely explains how billionaire oligarchs are a big part of Putin’s power. base. But they have mentioned that one Russian oligarch Roman Abramovich is trying to sell his winning Premier League soccer team mentioning that Abramovich has promised to donate the profits from his sale to the Ukrainian victims of Putin’s war. They often finish the story with something like “and he’s Jewish.” Why is that relevant? Are they hinting that Jews don’t donate to people in need? Or is it the opposite? Part of Jewish law is that community leaders are responsible for those who are in need. Thus, some 800 years ago, Maimonides wrote: “We have never seen or heard of a Jewish community that does not have a kuppah (charity box).” Why doesn’t the media explain the relationship between Judaism and charity? Or that the Hebrew word for a righteous person is Tzaddik and the word for charity is Tzedakah which comes out of the term for righteousness. If the media mentions that Abramovich is Jewish, shouldn’t they explain why that fact is related to what he’s doing?

One of my favorites I have heard on every news channel. A reporter will ask a Ukrainian member of Parliament how much time before Russia takes the entire country? They are fighting a war and expect to win, and the media is asking when they will lose. I would love to hear a Ukrainian tell the reporter off. Or even better yet, give the reporter a snarky answer, like “we are scheduled to surrender at 5:37am Secaucus time on Sunday, so don’t sleep late.

The same as Abramovich, the media keeps mentioning that Zelensky is Jewish. On the one hand, I am proud that such a hero is Jewish. On the other, why don’t they mention why it’s important, the long Ukrainian history of Antisemitism which is why my grandfather’s family left Odesa to come to the U.S., Or how the country fought to eliminate that hatred, and the election of Zelensky was evidence they were winning that fight, Why don’t they mention that like the great Zionist leader Ze’ev Jabotinsky who was born in Ukraine and spent the early part of his career there Zelensky is a Zionist, He wanted to study in Israel, but his father wouldn’t allow it.

When the Russians bombed and destroyed the Babyn Yar memorial in Kyiv, a place during the Holocaust where the Nazis killed over 31,000 Jews in two days, they mentioned that Zelensky was Jewish. They also noted Zelensky’s faith when Putin justified his war on Ukraine by the need to “de-Nazify” its government, falsely claiming that Kyiv is controlled by a cabal of American-sponsored neo-Nazis. Ukraine was offended, but they didn’t mention why Zelensky was particularly offended by the description. How the Nazis affected his family Zelensky’s grandfather and three great-uncles were sent to concentration camps. The only one who came out alive was his grandfather.

The media never mention how Putin’s de-Nazify statement was hypocritical. The latter part of the Soviet Jewish movement was a significant international human campaign movement during Putin’s career as a KGB operative. During that period, the USSR closed down synagogues and published many anti-Semitic books, some of which accused Judaism of being a Nazilike religion. That may be where Putin got his de-Nazify line. During that time period, the USSR refused to allow their persecuted Jewish community to leave the country. In fact, asking for exit visas was a guarantee for further persecution.

I could go on for weeks explaining how the media has not been doing their jobs in explaining the Ukraine story. Personally, I don’t believe it was an attempt to spin the truth, just examples of the MSM laziness.