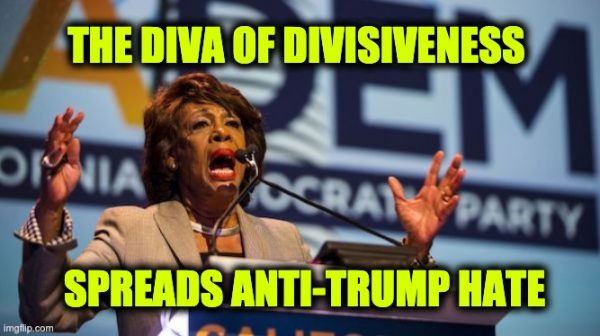 Waters began her statement to TMZ with, “My first thought was not again, not one more killing,”

I thought the same thing as did many others. But mad Maxine followed by leaving me and the rest of Planet Normal, to slip into her usual crazy hatred.

And I’m reflecting on all of the killings of young black men in particular, but of course, black women too, at the hands of the police and at the hands of, you know, these white supremacists.”

(…) “I think that the officer who had his knee on his neck enjoyed doing what he was doing,” Waters stated. “I believe sometime some of these officers leave home thinking, ‘I’m going to get me one today.’ And I think this is his one that he got today.”

These cops’ actions were horrible. But unless Waters is a mind reader, there is no way to know were if they were being racist or if they had a different evil motivation for their criminal act. We won’t know the answer until the investigation is over.

The Washington Examiner added, “Waters, a Democrat from California, continued: “And I’m thinking about the way that the president conducts himself. In a way, he’s dog-whistling, and I think that they’re feeling that they can get away with this kind of treatment. And I’m just so sorry about the loss of another life.”

Really diva of divisiveness? Pray, tell, what dog-whistling?  Are you talking about record-low African American unemployment? Perhaps it’s the criminal justice reform bill Trump pushed through? It must be the permanent funding for traditionally black colleges President Trump put through—either that or working with private industry to create opportunity zones in poor neighborhoods and funding it with $75 Billion? Which one of those is a dog whistle Rep. Waters?

Video taken at the scene made Americans of all races want to throw up, it was indeed a disgusting sight. It displayed an officer holding a prone and already handcuffed George Floyd down on the ground.  It showed the officers knee on George Floyd’s neck as Floyd and some of the bystanders pleaded with the officer to get off of him. I can’t breathe, he said. But the officer kneeling on the man’s neck, and at least one other officer watched and did nothing.

The four officers who were involved in the situation have been terminated from their positions on the police force. The mayor of Minneapolis has said they should be criminally prosecuted, the FBI is investigating the killing of Mr. Floyd.  And President Trump was to receive a briefing sometime on Thursday. But if the hate-mongering Waters wants the cops tossed in jail for murder, law enforcement needs to do a complete and proper investigation—to make the charges stick.

The incident has caused massive rioting and looting in the city of Minneapolis, with businesses actually being burned to the ground. But instead of being a leader and trying to redirect the understandable anger away violence, Maxine Waters added divisiveness and gasoline to the fire with her false claims and hate-mongering that the President somehow motivated the officer to kill Mr. Floyd.

Here is the truth—99.99% of people involved in law enforcement do the right thing. The cop that killed George Floyd and his partner should be, and probably will be criminally charged. They not only killed a man but also damaged the reputations of the city they served, their colleagues in the Minnesota police force, and the hundreds of thousands of good cops across the country.

I pray that investigators and prosecutors honestly and transparently follow through with this case. Based on the quality of most of the law enforcement in the country, there is a 99.99% chance of my prayers will be answered positively.