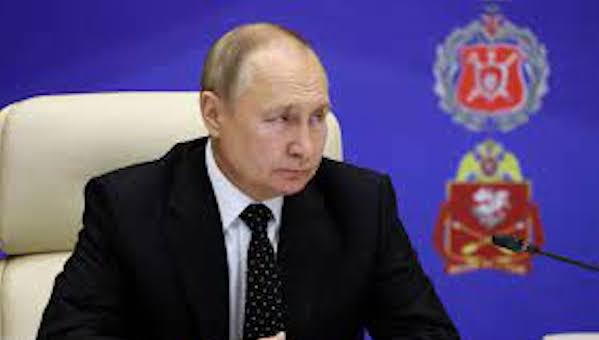 Over the past eight months, The Lid has reported that Russian Despot President Vladimir Putin was seriously ill. Many of the reports claimed he had cancer,  specifically thyroid cancer. Based on how he looked and visits by cancer doctors, many believe the tyrant has one foot in the grave and the other on a banana peel, but that hasn’t been proven.

Danish newspaper Berlingske spoke to a senior Danish military intelligence official who, in an interview, claimed Putin’s thyroid-cancer drugs may have induced delusions of grandeur. This drug-induced megalomania may be behind his attack on Ukraine.

The Russian president Vladimir Putin was likely influenced by medication when he decided to launch a war in Ukraine. In an interview with Berlingske, the head of Russia analysis at FE, the Danish Defence Intelligence Service, provides some rare insights into what we currently know about Putin – and what may eventually lead him to lose power.

There have been many times since the Russian authoritarian leader started the war with Ukraine, and observers believe his war strategy was totally absurd. The Danish intelligence official, who was referred to only by his first name, Joakim, citing security reasons, told the newspaper Berlingske that Putin was taking hormones to treat thyroid cancer in February 2022 and that it likely affected his mental capacity. He said “delusions of grandeur” are a known side effect of the type of hormone treatment that he believes Putin was on at the time.

Joakim is an expert in Russian affairs:

Joakim heads the Russia analysis team at FE, the Danish Defence Intelligence Service. For security reasons, he cannot present himself in photos or use his last name.

This is the man who leads the Danish intelligence gathering on President Putin, the Russian army, and Russian society.

And he is the one helping Danish decision-makers and politicians gain the best possible understanding of the threat that Putin poses to Denmark and his chances of success in Ukraine.

Joakim explained, “It’s not something I can say for certain, but I think it did affect his decisions when he launched.”

At first, FE (Danish Intelligence)  thought the Russians would win the war in two weeks.

FE was fully aware of major problems in the Russian army with corruption, mismanagement, and slow logistics. But the Russians were fully aware of this themselves and so were able to make the necessary adjustments. This isn’t why the invasion failed.

Today it is evident that the key unknown factor was Putin’s poor decision-making. We put a lot of the blame for this on Putin’s shoulders, Joakim said.

It wasn’t poor intelligence but Putin’s ideological convictions that led Russian soldiers to believe they would be greeted with flowers.

It was because of Putin that everything was planned by a narrow circle of people and only shared through the ranks at the very last minute. Because of this, the Russian fo rces simply did not know what they were supposed to be doing.

When he planned the personnel, the Russian army was 30,000 infantry soldiers short. They were replaced by special forces (the equivalent of U.S. Army Rangers or the Navy’s Seal Team). Putin’s planning mistake meant those highly trained special forces acted as foot soldiers.

Putin is micro-managing the war and making bad decisions.

Shortly before Christmas, he took part in a meeting with the entire staff of command from the war in Ukraine.

»That’s the worst idea in the world,« Joakim explains. »He has a general to lead this war. So he shouldn’t be sitting there getting input from all these other generals.«

The army is now so badly depleted that it will take years to rebuild it. Even then, the soldiers will be more poorly equipped than before and forced to use old armoured vehicles.

For this reason, Joakim does not believe there will be a major new Russian offensive against Kyiv in February, as Ukraine has warned. In such a short time it simply isn’t possible to train Russia’s mobilised troops for an offensive of that type.

In the spring, the Russian investigative media outlet Projekt published an extensive story on the doctors who have attended to Putin over the years. Judging from the doctors who have seen him most frequently, Projekt concluded that Putin may have had cancer of the thyroid.

FE believes that Putin previously had a form of cancer and that he was having treatment for this when he started the war, which may have influenced his decision.

»He also had a moon-shaped face at the start of the year, which is another known side effect of the same type of hormone treatment,« Joakim says.

FE does not believe Putin will die from his cancer.

But he may die for a different reason. The Russian elites may decide they need a stronger president who makes fewer mistakes. The Russian tradition is that top government officials do not get fired, they get fired upon.