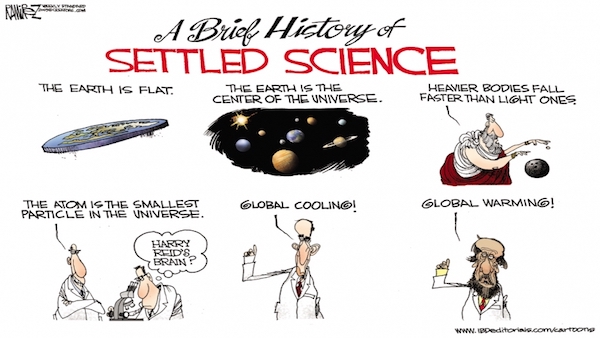 This last Saturday was Earth Day. It all started back in 1970 to bring awareness to what damage humans have done to the earth over the billions of years we have been here (or not).

This “movement” led to the making of the demonic EPA, the Environmental Protection Agency. I say demonic not because I don’t think the planet needs protecting at all but because the Gestapo-style tactics of the EPA hurt many business who really didn’t deserve it. They could have worked a little better at helping businesses get in line with the laws.

Somewhere along the way Earth Day was turned into a “March for Science!” WHAT? A March for Science? I just happened to be in Pasadena while a group of young people were very excited about participating in this march. As it happened I was waiting to cross the street with a group of giddy girls with the signs and pom-poms in support of “science”.

Joe: Ladies what’s going on?
Ladies: We are marching to support science.
Joe: Wow there are people who don’t believe in science?
Ladies: Yup, they don’t believe in climate change and how it hurts the earth.   A lot of them are religious, some just think it’s all a joke!
Joe: Well I’m, “religious” and I believe in science!
Ladies: You DO? Really?
Joe: Yup! BUT I believe God made science not science making God. I believe that the reason that H2O makes water is because God willed it that way not science. All science did was discover God’s plan for water. Science is good and cool BUT not always correct!

You know how your dog looks when he hears a high-pitched squeal? Yup, that’s what they looked like. I was looking for a re-boot button because they looked stuck! Way too much logic to process in a short period of time.

I told the ladies to get informed and look up failed predictions of Global cooling, warming, climate change, whatever!

Since I know they probably won’t and you probably wont either, let’s look at Al Gore’s house of mirrors.

So how many times does one have to get predictions wrong before you kick them to the curb? In the Old Testament when a prophet said he had a word from God and it didn’t happen they stoned him! Thirteen years ago Saturday, Al Gore predicted, in front of a German audience, that the “North Polar Ice Cap would be completely ice free in five years” and that “the entire North ‘polarized’ cap will disappear in 5 years.”

When that didn’t work out he predicted it again in 2009, “Some of the models suggest that there is a 75 percent chance that the entire north polar ice cap, during some of the summer months, could be completely ice-free within the next five to seven years.” We’re still waiting. Maybe he is using a different calendar.

With something as “important” as “Global-Warming-Cooling-Climate-Change” you would think we would want accuracy and real numbers.

For someone who has been leading this “war,” Mr. Al Gore has gotten it wrong EVERY TIME. Yet those who have made him lord and savior don’t care. They keep following him off the cliff like he can save them.

And then, Al Gore got together with the UN (United Nuts, they’re made for each other!) They raised the alarm. They screamed from the mountain tops that we had less than a decade to save the planet.

The San Jose Mercury News reported on June 30, 1989 that “senior environmental official at the United Nations, Noel Brown, says entire nations could be wiped off the face of the earth by rising sea levels if global warming is not reversed by the year 2000.”

Well, global warming wasn’t even touched, let alone reversed. And the only nations wiped out were those taken by the Russians or ISIS. But hey, don’t let facts stop you.

Twenty eight years later, they are still selling it. They don’t even say they made a mistake, it was bad data, a miscalculation… nothing. Just trust us, it’s true.

George Monbiot, another “environmentalist,” said because we won’t fix this issue that within 10 years, farming worldwide would only be able to feed either animals or humans, not both. In 2002 the worldwide numbers of people who went underfed were around 930 million. In 2014 that number dropped to 805 million. I’m not the sharpest knife in the drawer, but I think that’s more people eating enough food? What happened? Must be common core math! Check out the number at the UN for yourself!

Another UN golden boy, Rajendra Pachauri, the former head of the Intergovernmental Panel on Climate Change said, “If we don’t make changes within the next 3 years it will be too late”. That was 2007. By 2012 we did nothing and the “too Late” (whatever that was) never happened. Now it’s 2017 and we’re still waiting for a real plan. And Mr. Pachauri (who was the leading Climate Change scientist for the UN) was more interested in chasing women around his office than taking care of the “too late” issue. He had to resign due to sexual harassment charges.

Prince Charles weighed in back in July of 2009 and said we would have “irretrievable climate and ecosystem collapse, and all that goes with it.” He went on to say that experts had told him that we had about 26 months before utter catastrophe. September 2011 came and went. Yep, you guessed it. Nothing happened! (Except that pesky little 9/11 attack on the U.S. by radical Muslims. But, hey, no biggie, right?!)

In 2009, UK Prime Minister Gordon Brown said, “There are only 50 days to take action or global warming would be irreversible.” He had no Plan B. It’s pretty hard to get the entire WORLD to move in 50 days.

Remember the Climate Treaty of 2009? World Leaders came together, again, to save the world. Canadian Prime Minister and Green Party leader said, “Earth has a long time. Humanity does not. We need to act urgently. We no longer have decades; we have hours.” In all fairness, he didn’t actually say how many hours!

When Obama was elected many said he had only 4 years to save the world (what a powerful man). He had total control of the government those first couple of years and did nothing. UN Foundation President Tim Wirth said Obama’s second term was “the last window of opportunity to impose policies to restrict fossil fuel use” and that it’s “the last chance we have to get anything approaching 2 degrees centigrade, if we don’t do it now, we are committing the world to a drastically different place.” That was in 2012!

In 2014, France’s foreign minister said, “We only have 500 days to act and avoid a climate chaos.” Swung on and missed! You see, his meeting was in May of 2014. The Paris climate change meeting happened in December of 2016. And now almost 3 years after his original prediction, no major calamity! Still waiting! (Not really.)

The UN and others have been throwing the same mantra at us for years… act now or else. Many times we haven’t “acted now” and “or else” has not happened. Not one minor catastrophe.

They said we would be covered in snow and ice and much of the US would be uninhabitable. That was in the seventies. They called it Global Cooling. They blew it.

Then they told us that it was Global Warming and that New York would be covered with over 50 feet of water and there would be no ice at the polar ice caps. Another miss!

Let me help. You’re making Al Gore and others very rich! Meanwhile, it was recently reported that in the 200+ years we have been tracking Earth’s temperature that the temperature has increased by .08 degrees. That’s 8 one hundredths of ONE degree! So it seems Earth continues on its natural 5 gabillion year cycle, just as it always has!

Please stop issuing false news from someone who has made millions off his climate fear mongering and a self-identified “science guy.” You might as well get science reports from Bozo the Clown!