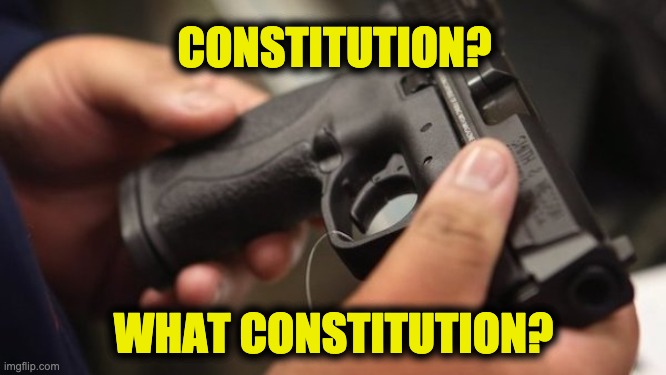 Rep Bonnie Watson Coleman (D-NJ) filed HR 3740 on June 4, 2021. It’s co-sponsored by 7 other Democrats. The title is “The Handgun Licensing and Registration Act of 2021,” and it’s been sent to the House Judiciary Committee. Hopefully, it will never make it out of committee, but it is a Democratic Party-controlled Congress.

The Handgun Licensing and Registration Act requires that anyone who wishes to own a handgun be a minimum of 21 years of age. (There does not appear to be a portion that exempts US military, but we haven’t seen the text yet). Before a mandatory license is issued, they would have to complete an approved firearms training course and submit fingerprints and photographs for the background check. After all of that, they must register their firearm, and the license issued is only good for 5 years.

While I would encourage new gun owners to take lessons, one doesn’t need lessons to exercise their freedom of speech or the press, nor are they limited to people over 21. Why do they believe it’s constitutional to require lessons for this part of the Constitution? Are there any parts of the constitution where one has to take lessons before Americans can exercise their rights or are limited by age? I haven’t heard of any, and unlike most Congressional Democrats, I’ve read the Constitution so if there were any section with those requirements I would have noticed.

Per Guns.com, there is more to the law:

Going past the licensing requirement, the bill would direct the U.S. Attorney General to establish a system for the “registration of all handguns owned, possessed, or controlled in the United States.”

Penalties for non-compliance would include fines and the possibility of imprisonment.

The glaring problem with implementation is that the proposal’s scope may be impossible due to the simple scale of how many handguns are in American homes.

In 2009, federal regulators estimated there were at least 114 million handguns in circulation among consumers in the U.S., making them the most popular type of firearm in homes across the nation. Since then, those numbers have only climbed. According to the latest production figures, 3.6 million pistols and revolvers were produced in 2019 alone, not counting imports, homemade guns, or those crafted by individuals for personal use.

Democrats love to refer gun ownership to the same standard as driver’s licenses or, when convenient, voting ID.

Our government requires registration and basic standards for voting, operating a vehicle, even opening a business. Yet, for weapons created with the single intent to take a life, we have developed a dangerous aversion to any mechanism to understand where and with whom these weapons reside. Rep Bonnie Watson Coleman (D-NJ)

As usual, Rep. Coleman does not explain why someone who is already inclined to break the law will follow this law. That’s because most of them won’t.  These restrictions create a burden that will be followed by law-abiding gun owners.

Do any of the Democrats that sponsored this bill have a firearm? Two of the Democrat sponsors are also New Jersey, two are New York, one is a DC rep that is a non-voting member, one from Indiana, and one from North Carolina. But Ms. Coleman and her Democrat colleagues also appear to have no concept of how many handguns are in the United States. The sheer volume would preclude any kind of enforcement of this bill. They also have problems with the difference between a privilege and a right. It is a right enumerated in the Constitution to keep and bear arms.

Other Democrats have filed similar bills such as HR 127, which requires a federal license and bans certain kinds of ammunition. That bill also had a psych evaluation attached to obtaining a federal license. We previously reported HR 127 here. HR 127 was submitted in March by Rep Sheila Jackson Lee, had no cosponsors, and thankfully hasn’t made it out of committee, possibly because Ms. Jackson Lee has a reputation of having an I.Q. is so low she couldn’t spell gun if you spot her the “g” and the “u.”