She Might Not Have Said It---But She Acted That Way 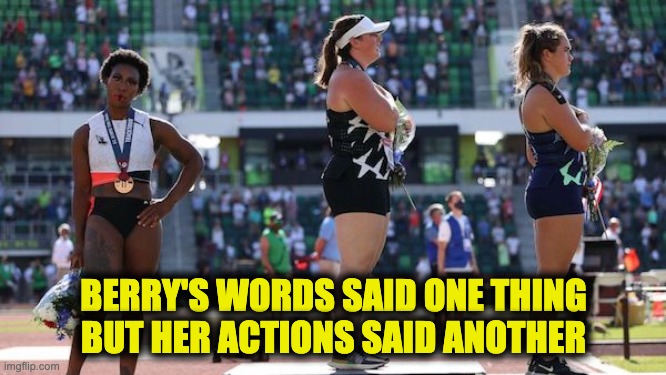 Berry was previously sanctioned by the International Olympic Committee because she raised her fist in protest at the end of the national anthem, which is against the IOC (but not the USOC) rules.

‘Initially, after she created a firestorm by turning away from the flag during the U.S. Olympic track and field trials on Saturday, she claimed, “I feel like it was a set-up, and they did it on purpose,” Berry said. “I was pissed, to be honest.”

It wasn’t a set-up. She happened to be on the platform at 5:20pm. The Star-Spangled Banner was played each day of the trials at 5:20pm. Berry either didn’t read the schedule or was looking to make a statement. If Gwen Berry didn’t know the national anthem was about to be played, why did she just happen to have a t-shirt that said “Activist Athlete” in her hand during the medal ceremony to cover her face as the anthem was played, if it wasn’t to add an exclamation point to her disrespect? In other words, Ms.Berry isn’t being honest—if she wasn’t so full of crap she would deflate.

She told the Black News Channel on Tuesday:

“I never said that I didn’t want to go to the Olympic Games. That’s why I competed and got third and made the team,” Berry said.

“I never said that I hated the country. I never said that. All I said was I respect my people enough to not stand for or acknowledge something that disrespects them. I love my people. Point blank, period.”

Berry said she specifically has an issue with a line in “The Star-Spangled Banner,” which she says alludes to catching and beating slaves.

For those who are thinking they never knew about a line in our national anthem alluding to catching and beating slaves, there is a reason they didn’t know—no such line exists.

Berry was referring to a woke-culture invented controversy. While the first verse is usually the only one sang, The Star-Spangled Banner has four verses. In the third verse, there is a line the woke crazies and other people with no knowledge of American history claim glorifies slavery and the beating of slaves.

Students of history know that Francis Scott Key was slamming the rank and file British soldiers in the supposedly offensive verse. During the War of 1812,  those soldiers generally consisted of people in one of two groups. One group was hired full-time soldiers, derisively called hirelings, meaning people employed to do menial tasks.

The second group was the Colonial Marines, British forces made up of freed slaves. The Colonial Marines “participated in the Chesapeake Campaign during the War of 1812, which saw some of the heaviest fighting between the British and the Americans. This campaign included the Battles of Bladensburg, Baltimore, and Fort McHenry, as well as the burning of Washington.” The Battle of Fort McHenry motivated Francis Scott Key to write the poem, “Defence of Fort M’Henry,” which was eventually partnered with the tune of an English drinking song and became The Star-Spangled Banner.

While it wouldn’t officially become our national anthem until 1931, the Star-Spangled Banner became popular during and after the Civil War as more than 360K Union Soldiers died in the quest to end slavery in the United States, and the American flag became an increasingly powerful symbol of national unity.

So Gwen Berry turned her back on the Flag because of a verse she probably never heard sung and referred to people who allied with the British to defeat the US in the War of 1812. The fact that slavery was legal in this country is a disgusting blot on our rich history. But the supposedly offending verse of our anthem wasn’t about slavery. It was about the people trying to help the British take back the country.

When selecting players for what would eventually become the 1980 Miricle On Ice U.S. Hockey Team, coach Herb Brooks said he was  “looking for players whose name on the front of the sweater is more important than the one on the back. I look for these players to play hard, to play smart, and to represent their country.”