Hamas – From Iranian Rockets to Holocaust Denial and Sharia Law

Hamas has been quite busy lately.

Last week, after 2 years of relative calm, a long range Grad rocket exploded in Beer Sheva. The rocket landed in a courtyard near a villa at about 8.45 p.m., causing extensive damage to homes in the area but luckily no casualties.

Iran has supplied Hamas with such long range rockets. With Mubarak ousted in Egypt, Hamas is using its close relations with the Muslim Brotherhood in Egypt to convince authorities to reopen Rafah crossing. According to officials in Gaza, Egypt informed Hamas that Rafah crossing point will be open in both directions on Tuesday, a few days after it has been open for people trapped in Egypt. We all know that more than people will pass through that border – it will be much easier for Hamas to obtain additional weapons to use against innocent civilians. 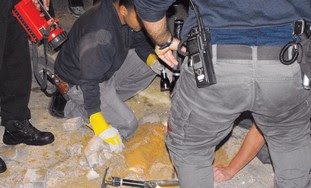 Meanwhile in Gaza, the local people do not fair much better.Hamas has been hounding secular population forcing them to comply with its strict Islamic Sharia Law. Hamas has bullied men and women to dress modestly, tried to keep the sexes from mingling in public and sparked a flight of secular university students and educated professionals. Most recently, it has confiscated novels it deems offensive to Islam from a bookshop and banned Gaza’s handful of male hairdressers from styling women’s hair.

To round up the picture here is a recent speech of Mahmoud al-Zahar. Hear the words of the co-founder of Hamas as he refers to the Jews “they became corrupt, committed crimes, stole and plundered, did every forbidden thing… I ask myself and the leaders of Europe and the USA, why do we support the Jews? Is it because they are persecuted people? That lie has already failed..”

In times of change it’s very easy to turn to hate and incitement to rally your people. As the region struggles for freedom and democracy we in Giyus.org urge you all to remember that Hamas, the Muslim Brotherhood and other radical Islamic groups do not represent freedom.