If You Don't Like The Term Illegal Aliens, How About Criminal Trespassers? 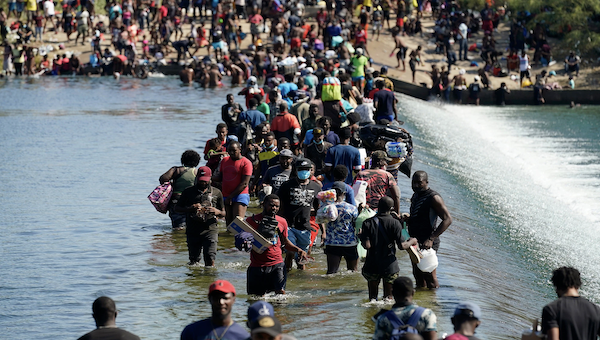 No country can sustain this level of migration.

The Biden-Harris administration’s “humane” handling of the crisis at the Southern border has emboldened the cartels and encouraged desperate people willing to make the dangerous trek across the United States with the assistance of human smugglers.

Breitbart News reports that over a half-million illegal aliens crossed the border between the beginning of April and mid-May. The Breitbart article states that this is during a span of “10 weeks,” but it’s actually much worse — it’s barely over 7 weeks.

Between April 1 and May 15 approximately 513,000 migrants illegally crossed the southwest border with Mexico. The number reflects apprehensions cited in the April Southwest Border Migration Report and unofficial numbers obtained from a law enforcement source within CBP.

The source stated that agents apprehended approximately 47,000 migrants just in the past seven days.

Until recently, the Rio Grande Valley and Del Rio Sectors led the nation in migrant apprehensions. However, a recent surge in the El Paso Sector pushed the remote Texas-New Mexico sector into the lead, Breitbart Texas reported. The source told Breitbart that El Paso Sector agents detained nearly 5,000 migrants in area processing center on Monday. Haitian migrants accounted for about 50 percent of this total.

The El Paso Sector currently sits at more than double its standard capacity. The source says in recent days, migrant apprehensions in the sector have exceeded 1,500. Del Rio Sector officials report their processing centers are approximately 40 percent over capacity.

By the way, when the liberal media tells you Cackling Kamala went to the border, that’s a lie. El Paso is a city on the US-Mexico border, but the border Czar only went to the city. The VP never went across town to the border.

That’s like bringing in a little more than the population of Fresno, California, into the country in less than 8 weeks.

Earlier this month, CBP reported 201,000 apprehensions of illegal border crossers in April — a new record high that surpassed the previous record that was hit in the last year of the Clinton administration.

While the Biden-Harris admin insists that the border “is not open” — the flood of migrants says otherwise. It’s pretty clear that people from around the globe who want in aren’t getting the memo.

CBP is also reporting that they’re seeing a dramatic increase in family units and unaccompanied minors.

The United States cannot continue to allow people to illegally cross the border and be granted de facto asylum because the process takes so long that they’ve established themselves and “made a life here.”

This is entirely unfair to the approximately 1 million legal immigrants. They are accepted into the country annually at the cost of thousands of dollars for immigration lawyers to assist in navigating the complex system.

But it’s more than that — an influx of millions of migrants will put strains on existing infrastructure. From schools to hospitals to housing, everything will be affected.

This is perhaps one of the reasons the Biden-Harris administration is flying the migrants they’re allowing into different areas of the country — so that the resources in one area aren’t overburdened.

One of the “unintended consequences” of the overburdened systems is housing for unaccompanied minors, which has resulted in at least a few foster kids being booted out of their homes.

And when foster kids aren’t being kicked out of their homes to make room for the kids being shuttled off by their crap parents, the Biden-Harris admin might be inadvertently working with human traffickers.

The Biden-Harris administration needs to enforce the laws that are on the books instead of letting people into the country for “processing” and a hearing that they may never attend because they’ve disappeared into the country’s interior.

Meanwhile, the left is desperate to conflate reporting on the number of illegals crossing into the United States with racism.

The Democrat partisan group, Media Matters for America — who have made it very clear in their 2017 “War Plan” that they want to discredit all conservative “disinformation” media outlets (i.e., all of them since anything that they don’t like is disinformation,) — have decided to target Bill Melugin of Fox News because of his on-the-ground reports about the flood of illegal migrants at the border.

You might remember Bill Melugin (@BillFOXLA) from incorrectly reporting that a Starbucks barista put a tampon in an LAPD officer's coffee. He's also Fox News' top guy at the border. Much of his reporting follows that pattern. My deep dive, for @mmfa https://t.co/w9gFel1v1s

It was primarily due to Melugin’s reporting that we learned of the migrant tent cities popping up under bridges near the border.

Melugin’s reporting is accurate and effective, and that’s why he’s being targeted.

Good morning from Eagle Pass, TX. This is what remains of a group of 200+ that crossed illegally earlier this morning. Border Patrol has already transported chunks of the group away. Eagle Pass continues to be inundated with large groups like this. @FoxNews pic.twitter.com/5Vc7pcAVqW

Good morning from Eagle Pass, TX. This is part of a group of 120 that crossed illegally late last night. Mostly all single adults. @FoxNews pic.twitter.com/dTOdBSlHzn

The left claims that any opposition to Illegals entering the city US is racist and anti-Hispanic. The truth is that it has nothing to do with the criminal trespasser’s race or ethnicity. This is about the rule of law — it wouldn’t matter if a million Norwegians, Danes, and Brits crossed the border illegally. We need a government to enforce the law.