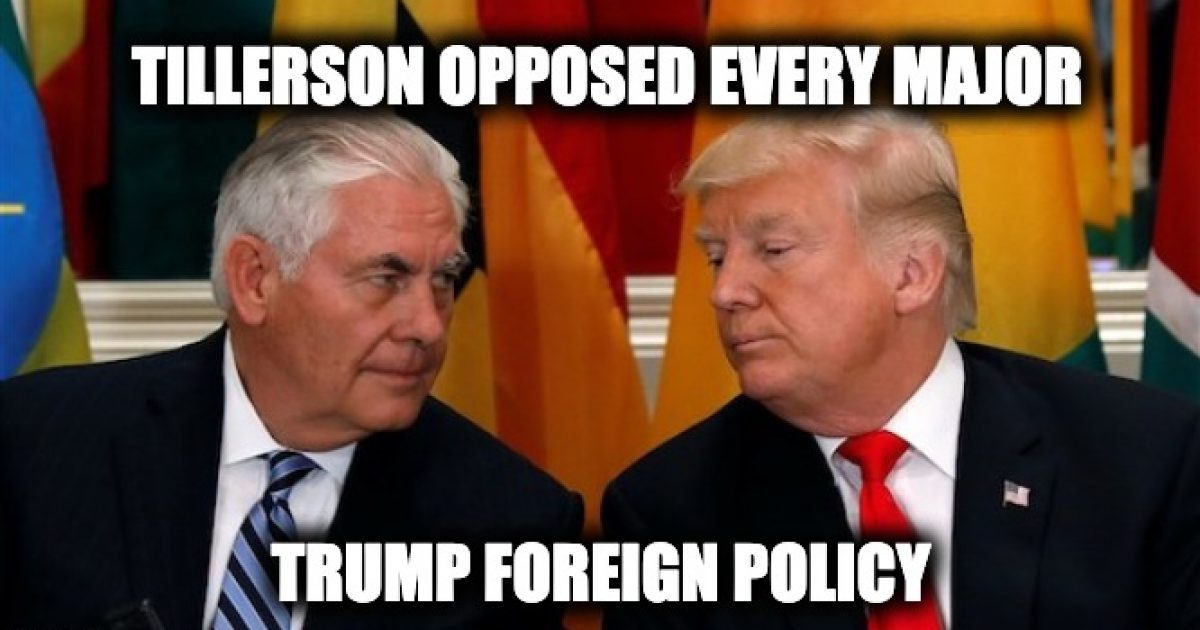 “Kelly and Tillerson confided in me that when they resisted the president, they weren’t being insubordinate, they were trying to save the country … Tillerson went on to tell me the reason he resisted the president’s decisions was because, if he didn’t, people would die. This was how high the stakes were, he and Kelly told me. We are doing the best we can do to save the country, they said. We need you to work with us and help us do it. This went on for over an hour.”

The fact that Trump and Tillerson had many foreign policy disagreements should not be a surprise. Tillerson was not a good fit for the administration as he disagreed with Trump on almost every major foreign policy decision.

For example, The President supported the Saudi-led blockade of Qatar because the country was funding terrorism. “Tillerson muddied Trump’s message, urging Qatar’s neighbors to ease up on the blockade and engage in ‘calm and thoughtful dialogue’ Tillerson’s spokesman R.C. Hammond says, “On Qatar, progress will be measured in months, and we are seeing it.”

One of the President’s campaign promises was to get the US out of the Iran deal. Tillerson knew this when he took the job but fought against it anyway. Tillerson kept pushing  Trump to re-certify Iran’s compliance with the nuclear agreement, whereas Trump has made clear he wanted out. Two months after Tillerson was fired, Trump kept his promise and pulled out of the deal.

In July 2017, President Trump started increasing the sanctions on Venezuela. Tillerson argued hard against the new financial sanctions, which restricted the Venezuelan government’s access to U.S. debt and equity markets.

Another Trump campaign promise was moving the U.S. Embassy in Israel to Jerusalem. Not only did Tillerson object to the move, but he made public declarations that it should wait till there was a peace agreement. On December 6, 2017, President Trump formally recognized Jerusalem as the capital of Israel and stated that the American embassy would be moved from Tel Aviv to  Israel’s capital Jerusalem Tillerson kept saying the move was 2-3 years off.

Truth be told, Tillerson had broader disagreements with Trump about Israel. The “Country Report on Terrorism, released by the State Department in July 2017, ignored President Trump’s stated policy, what UN Ambassador Nikki Haley has been saying at the United Nations, and would be something of which the team of Obama and Kerry would be very, very proud. The report blamed the victim (Israel) for Palestinian violence; whitewashed PA incitement and payment to Arabs to murder Jews (an issue the President raised more than once when he traveled to the area in May); condemned Israel’s steps to fight terrorism  (and the Jewish communities in Judea and Samaria); doesn’t acknowledge that Jerusalem is in Israel (again against Trump’s policy); and supported false reports by the United Nations and anti-Israel NGOs.

What about the radicalization of Palestinians by the leaders like when Palestinian President Abbas appeared on their state-owned TV to say:

“The Al-Aqsa Mosque and the Church of the Holy Sepulcher are ours. They are all ours, and they have no right to defile them with their filthy feet.” Abbas further said: “We salute every drop of blood spilled for the sake of Jerusalem

Much of Nikki Haley’s revelation was not a surprise, Rex Tillerson disagreed with almost every major Trump foreign policy, including the ones the president promised during the campaign. This leads to the question why did he accept the position? Perhaps because his ego was so large that he thought his ideas for American foreign policy were more important than those of the man who was elected by the American people to make those decisions.