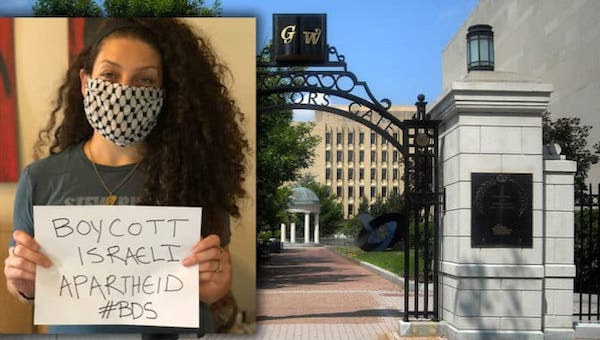 George Washington University has one of the largest Jewish student populations in the United States. So it could surprise you that the Washington D.C. private college is again caught in an Antisemitism scandal.

Actually, it should not; the most anti-Israel schools — Berkeley, Columbia, Harvard, Michigan — often have large Jewish populations. By comparison, there are no anti-Semitic crusades at the 1,500-student Presbyterian college around the block from me here in Appalachia.

While showing a class some paintings of the Prophet Muhammad now cause your termination, the current state of higher education apparently says constructing an entire course on vile anti-Semitism is “academic freedom” and not a concern.

Last week, the pro-Israel organization, StandWithUs, filed a complaint with the Department of Education’s Office for Civil Rights on behalf of Jewish and Israeli students enrolled in GW’s professional psychology program.

The complaint elucidates persistent anti-Semitic actions by a vile creature called Lara Sheehi, who also specializes in “anti-oppressive theories” and calls herself “anti-fascist.” She facilitates the program’s mandatory course, and last semester, Sheehi regularly singled out Jewish students solely for their identity.

Sheehi also invited a guest speaker who used anti-Semitic stereotypes about Jews being deceitful and power-hungry. A rabid Palestinian activist, Sheehi endorsed using violence against Israeli civilians and called all Israelis “fucking racist.” When some students complained about the open bigotry they encountered in the classroom, Sheehi predictably denied the allegations and, like any dishonest gaslighting goon, claimed the students were guilty of targeting other “identity groups.”

So much for safe spaces on campus when it comes to Jew-bashing.

“It’s been a really bad year for Jews at GW,” a student recently told the Jewish Journal. “It’s clear that events like the one in my class are related to the string of horrific antisemitic incidents at GW: desecration of a Torah scroll, folks chanting [and] promoting the intifada, and that’s just the tip of the iceberg. If you teach students in class that Jews are powerful, that we’re racist white supremacists, that you should silence our allegations of  Antisemitism, then, of course, students will be emboldened to take action against us, and that’s exactly what happened.”

Sheehi is open about her hatred and lunacy. She proudly claims in some academic word salad that she “works on race and white supremacy, decolonial struggles as well as power configurations in class and gender constructs and dynamics within Psychoanalysis. She practices from a trans-inclusive feminist and liberation theory model.”

Reports show Sheehi retaliated against the students who spoke out against her by disparaging them to faculty members and subjecting them to unwarranted disciplinary proceedings after they reported her aberrant behavior to university administrators.

“Antisemitism Has become a normal and accepted feature of these universities, as far-Left faculty and student leaders peddle anti-Semitic lies. It is the only acceptable form of “academic freedom” universities allow now,” Zachary Faria recently wrote in the Washington Examiner. “Antisemitism runs deep in universities’ rotten culture.”

It really says something that an (untenured) assistant professor at @gwu, a school with a large Jewish population and constituency, feels that she can be unabashedly antisemitic in a required class so long as it's wrapped in Israel-hatred. https://t.co/ouqLlFvSVO

GW has been rife lately with Antisemitism,, and their insouciance to this disease is beyond hypocritical. Their reputation is now about failing to stand up for its students by allowing racist left-wing faculty members to discriminate against one ethnoreligious group. Their school’s namesake — perhaps the most indispensable man in U.S. history — would be ashamed.

May the children of the stock of Abraham who dwell in this land continue to merit and enjoy the goodwill of the other inhabitants—while every one shall sit in safety under his own vine and fig tree and there shall be none to make him afraid.- Washington’s Letter To The Jews

The legendary historian Paul Johnson, who died last week, once opined that “hatred of Jews is not only irrational, it is self-destructive.”

Will idiotic Jewish parents continue to spend over a quarter-million dollars in tuition alone for four years of brainwashing at that cesspool? Probably.