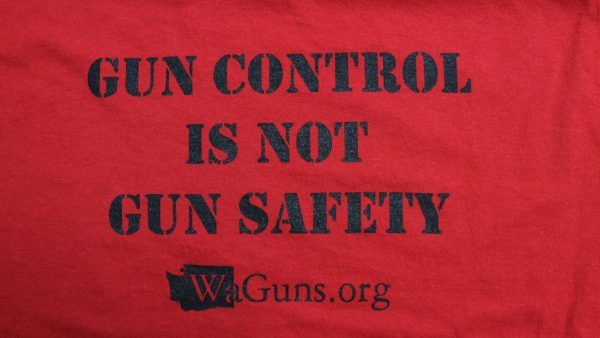 Democrat-Socialist presidential front runner Sen. Bernie Sanders of Vermont was quoted Sunday in a story about his “complicated record on guns.” He explained that if he is elected to replace Donald Trump in the White House, “Under our administration, it would be the American people who write gun safety legislation, not the NRA.”

What he is talking about is gun control legislation, which—according to WaGuns.org, an Evergreen State firearms group—has nothing to do with gun safety.

Sanders won big in Nevada last week, and he is looking to maintain momentum with the upcoming South Carolina primary this Saturday, a few days ahead of the “Super Tuesday” primaries in several states. Where Sanders had previously voted against some gun control legislation, explaining that his votes represented the majority of people in his state, his views have now changed.

As noted by The Hill Monday, Sanders “is on the cusp of leading the Democratic Party after a decisive win in Nevada’s primary and momentum that carries him into South Carolina on Saturday and toward the delegate-rich states that vote next week.”

According to the Las Vegas Review-Journal, with the final tally now in, Sanders won Nevada “in a landslide.” The ‘Sanders Surge’ reportedly has some Democrats worried that not only could it result in November loss for the presidency, it might also have a ripple effect that costs Democrats their jobs on Capitol Hill.

As noted by The Hill, “Sanders’s frontrunner status has put some Democrats on edge that the liberal revolutionary will harm the party’s chances to seize the White House and hurt down-ballot moderate Democrats who helped put their party in charge of the House in the last election.”

Sanders is taking a bit of heat over things he said during a “60 Minutes” interview Sunday. For example, he said his plan to pay for “universal child care” with a wealth tax raised some eyebrows.

And he may have damaged himself with Florida voters by defending Fidel Castro, stating, “We’re very opposed to the authoritarian nature of Cuba, but you know, it’s unfair to simply say everything is bad. You know? When Fidel Castro came into office, you know what he did? He had a massive literacy program. Is that a bad thing? Even though Fidel Castro did it?”