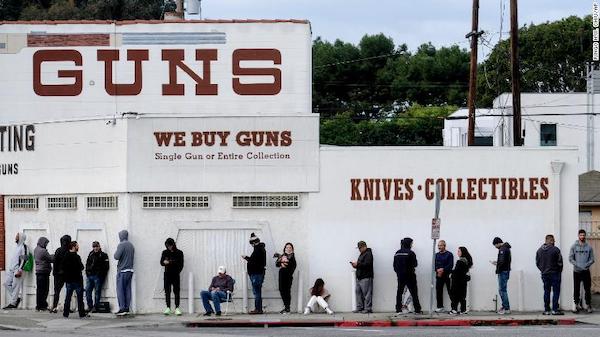 This should be another message to the anti-Second Amendment politicians that they should keep their hands off the Bill of Rights. Yesterday we reported Colorado gun sales were up 100% in the past week. However, Colorado is just one part of a trend across the country. Background check information indicates that nationwide gun sales in the past three weeks have doubled as Americans are worried about protecting their families in the wake of the China CoronaVirus crisis. gun ammo sales

Per Newsweek, federal background checks—which are performed by the FBI and are required when transactions occur through licensed dealers—are seen as a general proxy for gun sales. Mark Oliva, the director of public affairs for the National Shooting Sports Foundation (NSSF) reports since February 23, the NSSF was told that the National Instant Criminal Background Check System (NICS) has been running roughly double the number of checks it was over the same period in 2019.

A number of interviews conducted by Fox News in recent days with several gun store owners and sellers indicated that sales this month have, on average, spiked anywhere between 30 and 400 percent, compared with a “normal” time period. In addition to a jump in guns and ammunition sales, requests for body armor have also accelerated in some places.

(…) Dennis Santiago, a California-based firearms instructor, and financial risk analyst, said: “The human reaction to danger and uncertainty is predictable. Fear will cause people to want to seek safety.

“Firearms are a psychological symbol of being safer in uncertain times. People will gravitate to them. They are not acquiring them to use them. They are purchasing them, hoping they won’t have to.”

Even in the most liberal part of New York State, NY City and Long Island firearm sales are jumping–especially shotgun sales. People are purchasing the firearms to protect their families AND because they are worried leftists will take away their gun rights. The NY Post is reporting:

New Yorkers spooked by the coronavirus outbreak — and the government’s reaction to it — are packing Long Island gun stores to stock up on firearms and ammo amid the chaotic situation across the state.

The demand for firearms at Coliseum Gun Traders Ltd in Nassau County was so high Tuesday that manager Kevin Romano said they’re only letting small groups of people into the store at a time.

“I think a lot of people feel their rights are being infringed upon, and they want to exercise their Second Amendment right before any possible gun restrictions are put in place,” Romano said at the Uniondale shop.

“People are mostly coming in to buy shotguns and ammo, and we are pretty well stocked. There is no fear we are running out,” he added.

(…) David Straus, 53, who lives in New York City, said he was there to buy a shotgun because he fears what people might do if their jobs are cut.

“I think it’s better to be safe than sorry. I don’t know what’s going to happen if things get worse and people don’t have jobs,” he said.

“I need to protect my family and my home. I’m a big believer in prepare for the worst and hope for the best. I hope to never have to use it,” he added. 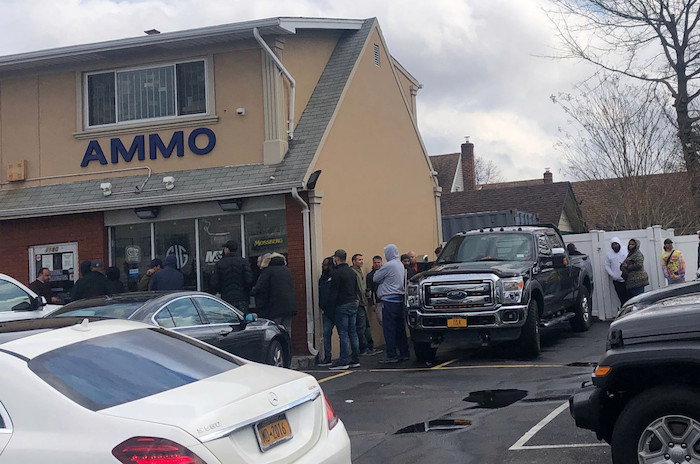 The ammunition website Ammo.com said it has recorded an unprecedented surge in bullet sales over the last three weeks. Administrators for the site, which ships ammunition to all but four states across the nation, released sales figures late Monday night showing a 77% increase in website visits between February 23 and March 15. Those visits led to a 222% increase in transactions over the same period when compared to the first three weeks in February. Revenue has increased 309%, according to the site, which said coronavirus fears are fueling the sales surge.

“The world has never seen anything like this and people want to make sure they’re prepared for whatever lies ahead, whether that be food shortages, government shutdown, or worse,” a spokesperson for Ammo.com said in an emailed statement. “When everything around you is uncertain, having a supply of ammunition can make our customers feel safer.”

The Chinese CoronaVirus is an unprecedented situation that has generated great fear across America. That fear incited many to purchase firearms to protect their families, just as they do with most national emergencies.  Liberal Democrats should watch and understand how the American people value their Second Amendment rights.