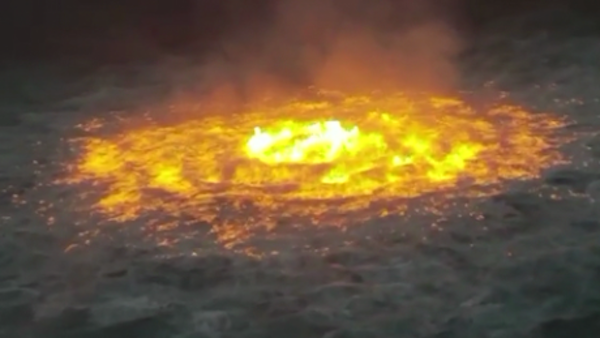 For many of us, the last few years have been filled with wild, out-of-control vignettes of a world gone mad.  Pandemics, historic storms, political unrest, racial revolution, building collapses, murder hornets…you name it. Gulf of Mexico inferno

To be fair, much of this was going on before we chose to notice, but the advent of the information revolution is now in full swing, and we are seeing images from the world abroad being broadcast directly into our telephones in real-time.

And so we see it all.  We bear witness to a world that is far scarier, at times, than we ever imagined.

This week was no exception, as a fire raging on the surface of the sea sent social media into a panic.

Mexico’s state-owned oil company  [Permex] said a fire caused by a rupture in an undersea gas pipeline in the Gulf of Mexico is over, but videos showing efforts to put out what appears to be an underwater caldron of fire live on.

The “fire in the sea” was put out at 10:45 a.m. following a gas leak about 500 feet from a drilling platform, Pemex tweeted. No injuries were reported and the company said it took about 5 hours to bring the incident under control.

The company said it used boats to pump water over the underwater blaze, although nitrogen was also used to control the fire, Reuters reports, citing a Pemex incident report.

The images were simply unfathomable.

The Gulf of Mexico is literally on fire because a pipeline ruptured pic.twitter.com/J4ur5MNyt1

RING OF FIRE: An undersea gas pipeline ruptured in the Gulf of Mexico, sending infernal flames boiling to the surface in the Gulf waters. pic.twitter.com/vm1Ph6Skhi

In the midst of all hell breaking out in the middle of the gulf…there was one boat that didn’t know where it was:

And what is this one doing? pic.twitter.com/wgtmY1ifyp

Pemex said it would investigate the cause of the fire, the company which has a long record of major industrial accidents at its facilities, added it also shut the valves of the 12-inch-diameter pipeline.

The videos elicited several different reactions on social media, from sheer amazement to a despondent feeling that our planet may be in peril. But one thing we learned for sure, water will put out a fire on the water.

Much of the post was first seen at Flag and Cross