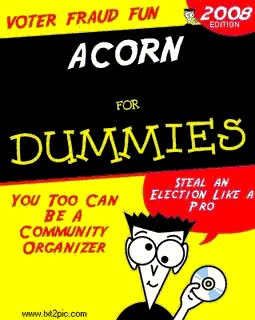 This past May charges of voter fraud were brought up against the Nevada arm of the President’s favorite community organizers, ACORN.

The state alleged that ACORN had policies requiring employees in Vegas to sign up 20 new voters a day or be fired. And, if you turn in 21 or more new registrations, you get a blackjack and a bonus of $5 per shift (hey it is Vegas).

It’s against the law in Nevada to pay individual registrants to register people based on the total number of people that you’ve registered. That’s a felony in Nevada.

Nevada officials just announced that Christopher Edwards, the head of the Nevada operations, has pleaded guilty and will testify against other ACORN programs:

A high-ranking official at the taxpayer-funded leftist group that conducts fraudulent voter registration drives has pleaded guilty to conspiracy for organizing a scheme that illegally paid workers to register new voters.

As a Nevada field director for the Association of Community Organizations for Reform Now (ACORN), Christopher Edwards paid canvassers—many of them “lazy crack heads”—to register new voters for the 2008 presidential election. He also set illegal quotas of at least 20 voters a day for canvassers to keep their job and offered an additional $5 for registering 21 or more.

ACORN’s shady quota system is illegal in Nevada as well as most states and the Chicago-based community group with strong ties to President Obama faces criminal charges across the nation. As part of Edwards’ guilty plea, he is cooperating with authorities and will testify against several high-ranking ACORN regional officials.

His testimony could strengthen other pending criminal cases against the group and its crooked method of recruiting new voters in low-income, “underserved” communities. For its corrupt 2008 drives alone, ACORN faces criminal charges in Florida, New Mexico and Pennsylvania. In an effort to dismiss the charges in Pennsylvania, the group actually filed a federal lawsuit claiming that the state anti-quota law it violated unconstitutionally interferes with important political activity.

In previous elections, ACORN has been busted for falsifying information to register new voters in numerous other states, including Milwaukee, Missouri, Ohio, North Carolina and Colorado to name a few. In 2007 the group settled the largest case of voter fraud in the history of Washington State after seven workers were caught submitting about 2,000 fake registration forms.

ACORN’s well documented history of fraud and corruption led to an overdue congressional investigation that determined the community group is a criminal enterprise. A lengthy report recently published by the House Committee on Government Reform reveals that ACORN has repeatedly and deliberately engaged in systematic fraud and that the group hides behind a paper wall of nonprofit corporate protections to conceal a criminal conspiracy on the part of its directors, to launder federal money in order to pursue a partisan political agenda and to manipulate the American electorate. Incredibly, the radical leftist organization with offices around the nation continues to receive massive amounts of U.S. taxpayer dollars for its various community programs. Earlier this year ACORN got a multi billion-dollar infusion—for “neighborhood stabilization activities”—from the monstrous economic recovery bill that was supposed to create new jobs and offer an immediate tax relief to stimulate the ailing economy.

The Global Inflation Nightmare That You Have Been Warned About Is Here
March 2nd, 2021 Sons of Liberty Media