Another Sanders Staffer Caught on Camera. ‘Guillotine The Rich’

Why Is The Bernie Camp’s Rhetoric Always So Gruesome? Is it Something In The Water? 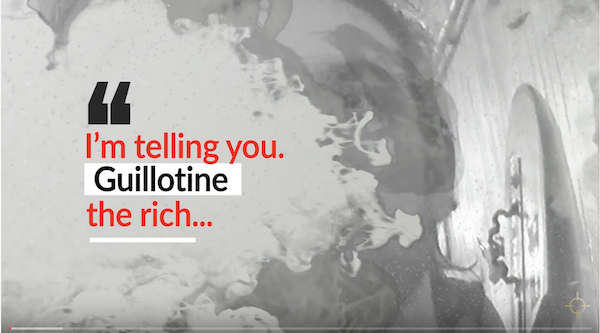 “I’ll straight up get armed, I want to learn how to shoot, and go train. I’m ready for the f*cking revolution, bro…I’m telling you. Guillotine the rich.” Martin Weissgerber, Bernie Sanders’ South Carolina Field Organizer

There’s something in the water over at Camp Bernie, it seems everyone is not just violent, but gruesomely violent.. Project Veritas released another video of a different Bernie Sanders worker and this is crazier than the last (see video below).

Maybe it’s the radical Vermont Senator’s constant talk of “revolution,” Perhaps it’s the sense of revenge his followers feel after being cheated out of the 2016 nomination by Hillary Clinton and the DNC. It could be the simple fact that socialism kills.  Whatever it may be, there are more than a few of the democratic socialists’ supporters who’ve gone off the deep end.

Then, just a few days ago, Project Veritas released an undercover video of Kyle Jurek, a field organizer for the Bernie 2020 campaign, insinuating that the Senator’s followers would react violently should Sanders be jilted again in 2020.  Jurek even went on to say that police officers would be explicitly targeted during the hypothetical battle.

Now, another Project Veritas video has been released, showing yet another Bernie Bro resorting to violent rhetoric.

The scene begins with a man identified by Project Veritas as Martin Weissgerber, a field organizer in South Carolina, claiming that he is following numerous accounts on Twitter calling for French-style Yellow Vest protests to take place in the U.S. and says he stands ready to help make it happen. “If Bernie was to lose, I would like to see Yellow Vest protests here, stateside,” the Project Veritas journalist says to Weissgerber.

And here’s where it gets even more spooky

“I’m already on Twitter, following numerous groups around the country that are ready to organize yellow vest protests. I’m ready…I’m ready to start tearing bricks up and start fighting…I’m not – No cap, bro. I’ll straight up – I’ll straight up get armed, I want to learn how to shoot, and go train. I’m ready for the f*cking revolution, bro…I’m telling you. Guillotine the rich.”

Then, in an eerie callback to the propaganda being spouted by the Jurek mentioned above:

“What will help is when we send all the Republicans to the re-education camps,” he says. “Can you imagine Mitch McConnell? Lindsey Graham?”

“The gulags were founded as re-education camps,” he explains in another cut. “People came from America to work on the Belomorkanal, the Soviet project, for the communist project. It’s a beautiful thing.”

Watch the entire video below: