Get Ready America, Grocery Bills To Spike Up To $1,000/ Month 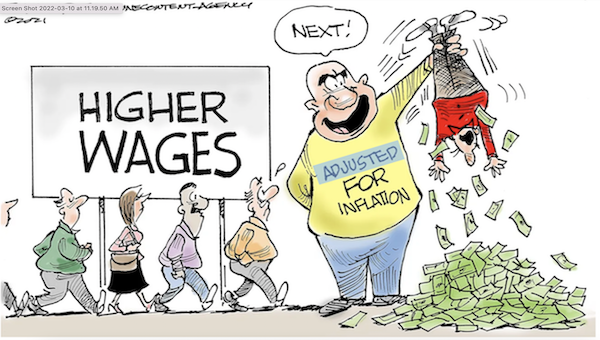 Before it gets too late, stock up on canned and frozen food, get as much food as you can before the price increases accelerate,

A farmer joined Tucker Carlson’s Fox News show Wednesday to warn that Joe Biden’s failed economic policies and the war in Ukraine will cause the costs of food to skyrocket in the coming months.

If you think the high cost of gasoline is a problem now, wait until summer when your grocery bill soars.

During his March 2 broadcast, Carlson informed his audience that Russia is a leading producer of the fertilizers and additives that American farmers use to help grow the crops that subsequently supply our grocery store shelves with food.

But the war in Ukraine is set to put a major crimp in the ability of American farmers to import the nutrients they need just as the planting season nears with the U.S. and other nations levying sanctions on Russia for its aggressive invasion of Ukraine.

Technology that can cut that in half or a third. It’s a pretty fixed formula. To grow an acre of corn on my farm, I need 200 pounds of nitrogen, 200 pounds of phosphorus, and 100 pounds of potash. We just — it’s going to be hard how this plays out. Will farmers switch to other crops that produce less? We’re certainly not going to literally pour on the groceries to grow this crop.”

But it isn’t just the war in Ukraine and the sanctions on Russia’s ability to export fertilizer supplies that farmers are facing. Failed Biden energy policies and leftist climate change policies are also wreaking havoc.

Riensche added that “what’s really affecting us are things that could have been prevented. The ESG things (Environmental, Social, and Governance policies). This could kind of be described as the food crisis of the Green New Deal.”

The farmer then pointed to Biden’s energy policies as a major contributor saying, “policies that have made us more dependent on foreign energy, energy plants that have been decommissioned from other power sources and transitioned to natural gas, and thus competing against the fertilizer input stocks, Wall Street taking an activist investor role with strategic plant closures.”

There is one more major problem as Riensche sees it: “But the kingpin in this, the worst part for a farmer is this action that has been taken by the International Trade Commission, the tariffs that they put in place creating monopolies that we can’t buy from friendly parties that have a third of the supplies.”

This is yet another Biden tax on the middle and lower classes that are already struggling under the massive Bidenflation the president’s policies have wrought.

But even before we find our wallets drained for food, we are already seeing Biden’s destruction of our energy sector with five dollars per gallon gas prices. And experts warn that we will probably see seven dollars per gallon nationwide prices come before we know it (it’s already that high in California).

Gasoline has been on the rise for eight straight weeks, and energy strategist Dan Dicker told Fox Carolina that he can see gas prices in some areas “might even get to $6.50 or $7.”

Per gallon, prices have already doubled over the last two years. Gas was just $2.17 a gallon on average at the end of 2020. And it is no coincidence that 2020 was the last full year we had a president who wanted the U.S. to be energy independent.

The bad news keeps hitting us, though. On the cusp of Biden’s first State of the Union speech on Tuesday, oil surpassed $106 per barrel for the first time in nearly a decade. And the unheard of has already occurred.

Brace yourself, America, and stock up. Joe Biden’s policies are not being reversed, which means the pain is just beginning.