Greg Gutfeld And Self-Censorship By The Islamophobic Al Jazeera 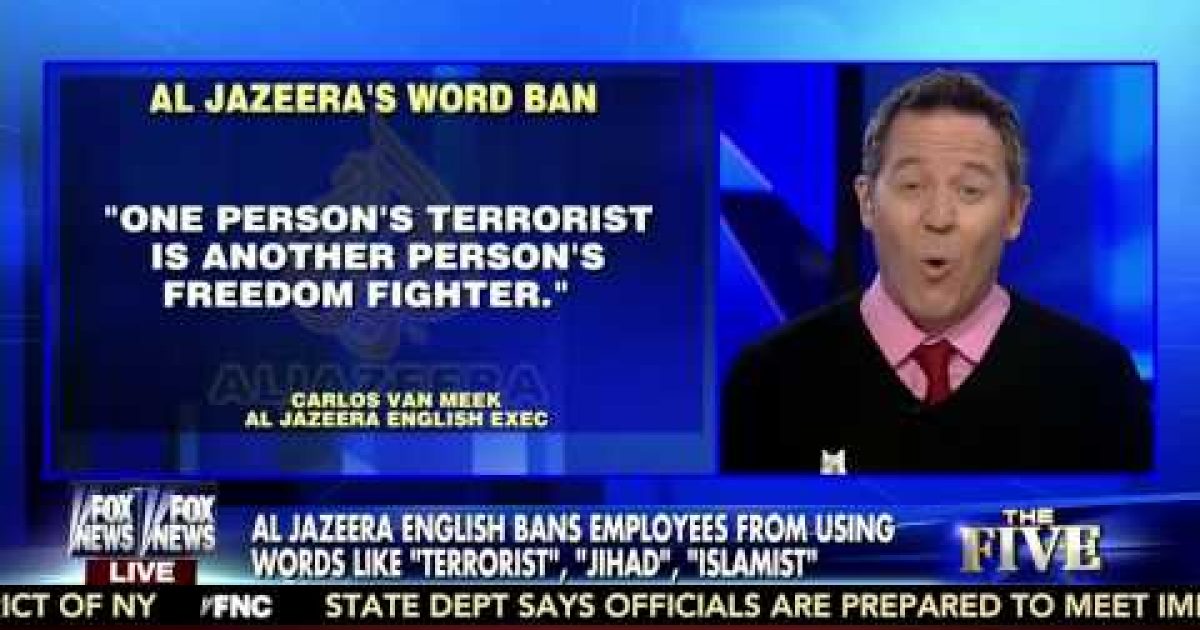 Greg Gutfeld has a way with logic. It may not be the kind of logic someone with a lesser snark factor might come up with, but it really works.  Take Wednesday’s The Five on FNC. According to Gutfeld, Al Jazeera is Islamophobic and you know, he’s right.

It began with  a Tuesday morning email to the staff of Al Jazeera English sent under the heading of “Terrorists, Militants, Fighters and then some” by Al Jazeera English executive Carlos van Meek. He was telling staffers what words they can’t use.

Revealed by National Review Online, the email echoes the words of terrorist apologists such as the Muslim Brotherhood-affiliated CAIR:

(…) van Meek warned the network’s journalists against the use of terms including “terrorist,” “militant,” “Islamist” and “jihad.”

“One person’s terrorist is another person’s freedom fighter,” the Al Jazeera executive wrote.

The word “extremist” was labeled off-limits. “Avoid characterizing people,” van Meek said. “Often their actions do the work for the viewer.”

“Do not use,” van Meek’s said of the term “Islamist.” He described it as “a simplistic label.”

According to van Meek’s instructions, Al Jazeera English employees are not to use the Arabic term “jihad.”

“Strictly speaking, jihad means an inner spiritual struggle, not a holy war,” he said. “It is not by tradition a negative term. It also means the struggle to defend Islam against things challenging it.”

Like its parent company Al Jazeera, Al Jazeera English is funded by the government of Qatar which has been accused of funding terrorist organizations such as Hamas and ISIS. Mr. van Meek’s email may be a result of pressure from the parent organization.

Now that you understand the background, watch Gutfeld’s brilliant monologue (and the full internal Al Jazeera email follows below the video.

From: Carlos Van Meek
Sent: Tuesday, January 27, 2015 10:06 AM
To: AJE-Newsdesk; AJE-Output; AJE-DC-Newsroom
Subject: Terrorists, Militants, Fighters and then some…
All: We manage our words carefully around here. So I’d like to bring to your attention some key words that have a tendency of tripping us up. This is straight out of our Style Guide. All media outlets have one of those. So do we. If you’d like to amend, change, tweak.. pls write to Dan Hawaleshka direct who is compiling the updates to the Style Guide and they will be considered based on merit. No mass replies to this email, pls.
EXTREMIST – Do not use. Avoid characterizing people. Often their actions do the work for the viewer. Could write ‘violent group’ if we’re reporting on Boko Haram agreeing to negotiate with the government. In other words, reporting on a violent group that’s in the news for a non-violent reason.
TERRORISM/TERRORISTS – One person’s terrorist is another’s freedom fighter. We will not use these terms unless attributed to a source/person.
ISLAMIST – Do not use. We will continue to describe groups and individuals, by talking about their previous actions and current aims to give viewers the context they require, rather than use a simplistic label.

NOTE: Naturally many of our guests will use the word Islamist in the course of their answers. It is absolutely fine to include these answers in our output. There is no blanket ban on the word.
JIHAD – Do not use the Arabic term. Strictly speaking, jihad means an inner spiritual struggle, not a holy war. It is not by tradition a negative term. It also means the struggle to defend Islam against things challenging it. Again, an Arabic term that we do not use.
FIGHTERS – We do not use words such as militants, radicals, insurgents. We will stick with fighters. However, these terms are allowed when quoting other people using them.
MILITANT – We can use this term to describe individuals who favour confrontational or violent methods in support of a political or social cause. For example, we can use the term to describe Norwegian mass-killer Andres Behring Breivik or Oklahoma City bomber Timothy McVeigh. But please note: we will not use it to describe a group of people, as in ‘militants’ or ‘militant groups’ etc.
J. CARLOS VAN MEEK | HEAD OF OUTPUT | NEWS
AL JAZEERA ENGLISH