Gowdy:There Were THREE Subpoenas-TWO Issued Way Before She Destroyed Evidence 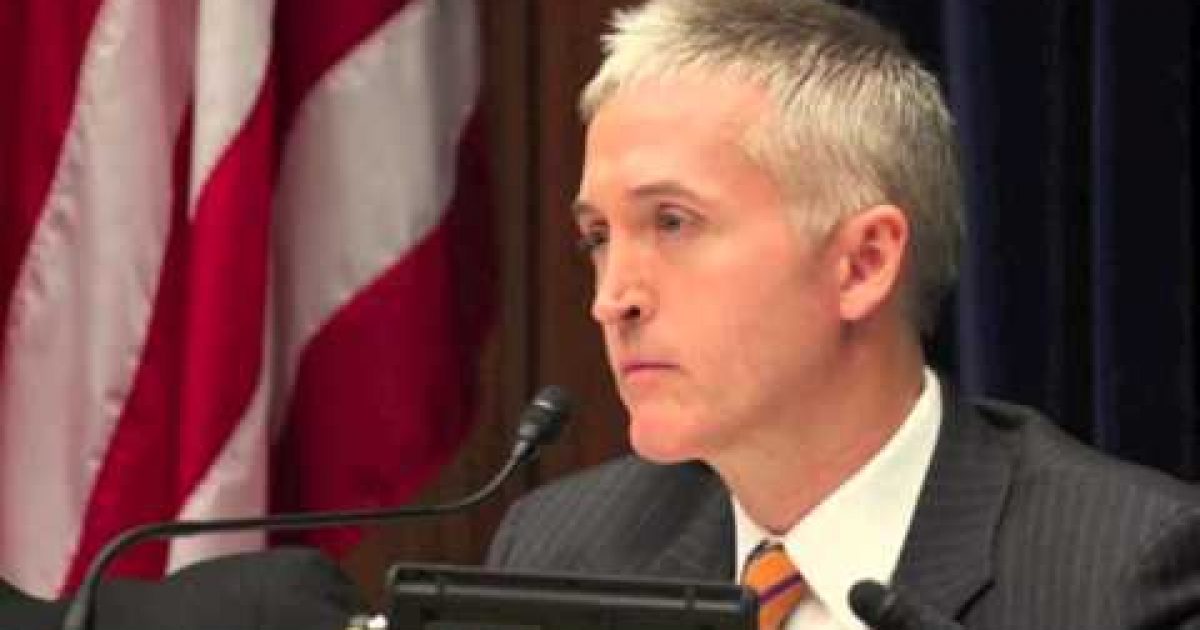 Following up on the release of the March subpoena requesting  Ms. Clinton’s emails Trey Gowdy, chairman of the House Select Committee on Benghazi spoke with guest host John Campbell, an
on the Hugh Hewitt show Wednesday and explained that it wasn’t just one subpoena that Hillary Clinton and her emails were under it was three, two were issued in August 2013 way before Ms. Clinton erased her emails.  The earlier subpoena was issued by a different committee.

Additionally there were letters from members of congress requesting the information

Gowdy also pointed out that “Congress wrote her directly when she was Secretary of State and asked her specifically, do you ever use personal email. She never answered that question” And that Sidney Blumenthal turned over to the committee emails  that weren’t in the 55K emails that Ms. Clinton claimed represented all of her emails.

Below is the full transcript and audio of the Gowdy interview:

Campbell: We have with us on the line now Congressman Trey Gowdy and chairman of the House Select Committee on Benghazi. Hey, Trey, great to have you on the show.

Gowdy: Congressman, we miss you, and thank you for having me on.

Campbell: Well, thank you so much for coming on. Now I’m going to play for you, I’m sure you expected this, the clip from Hillary Clinton yesterday when she was being interviewed on CNN by Brianna Keilar. So please play that clip.

Keilar: Facing a subpoena, deleted emails from them?

Clinton: You know, you’re starting with so many assumptions that are, I’ve never had a subpoena.

Gowdy: Well, she certainly had a subpoena. You know, when you lie, a lie suggests an intent to deceive. I can’t imagine whatever intent she could possibly have. I try not to use the word lie. I can certainly tell you this. It is a fact that there was a subpoena issued to her in March of 2015. But Congressman, it’s also a fact that there was a subpoena in existence from another Congressional committee far before that one. So there are two subpoenas. There are letters from Congress. And there’s a statutory obligation to her to preserve public records. So whether it’s a subpoena in place or whether it’s a statute in place, or whether it’s a Congressional investigation in place, you can’t delete and wipe out public records.

Campbell: Now Chairman Gowdy, I have the subpoena that your committee sent out, I have a copy of it, sitting in front of me from March of 2015. But you’re now telling me that there was another one prior to that?

Gowdy: Oh, yes, sir. There was, think back right after Benghazi, Jason Chaffetz wrote a letter to Secretary Clinton, in fact, saying Congress has the right and the authority to investigate these attacks. That is tantamount to a ‘do not destroy’ request. And also keep in mind, Congress wrote her directly when she was Secretary of State and asked her specifically, do you ever use personal email. She never answered that question. She never said yes, she never said no. All right, fast forward. The Oversight Committee is looking into Benghazi. They issued a subpoena to the State Department to bring certain documents over to Congress so we can inspect them. It is that subpoena that ultimately led the State Department to give us the first eight emails we got from her.

Campbell: And when was that?

Gowdy: We got them in August of…

Campbell: No, but when was that subpoena?

Campbell: So she, all right, so, because she had this subpoena in March, 2015, and then you’re saying she had another one in 2013.

Campbell: Yeah, because I’ve read that her trying to weasel out of this is, out of the lie, and I’m going to use that term, and I’m going to get back to it in a minute, but is that well, I thought that the question was whether I was under any subpoenas when the emails were deleted. And so obviously, she had subpoenas. I mean, there is no way that she didn’t have subpoenas. That’s without question. I’ve got them sitting in front of me. But you’re saying that also, there were subpoenas that covered the deletion of those emails?

Gowdy: There are, there were subpoenas in place well before our committee ever existed.

Gowdy: There were two, one related to ARB documents, and one related to what we call reading room documents. And they were sent to the Department of State asking that Congress be delivered these documents. Where that becomes important is it was as a result of that oversight subpoena that the Department of State first gave us any of her emails. So clearly, her emails were covered by that subpoena, or the Department of State never would have given them to us. Now her out is going to be this, or what she thinks is her out, well, the State Department didn’t have my emails, I did, which then moves us to the law, the statute, the regulation, which places on her an affirmative duty to protect and preserve public records. So whether there’s a subpoena in place or not, the law is and has been in place, you have to preserve public record. She decided on her own what was and was not public record. And John, what’s even worse than that, I mean, think when she left office. She left office in February of 2013, right?

Gowdy: She didn’t delete and wipe clean that server until the fall of 2014, 20 months later, after she left.

Campbell: Indicating to me an intent, and I’m not a lawyer, but an intent to deceive.

Gowdy: Well, at a minimum, that timing is curious, isn’t it?

Gowdy: We’re to the point where the Benghazi Committee is up and running, and they’re putting pressure on the State Department. We want the rest of her emails. And next thing we know, she’s swapping letters with the State Department, not telling us about it, she wipes her server clean. Then the story breaks in 2015, hey, all she used is personal email and she had her own server. That’s when we sent the second subpoena. But that first subpoena was clearly sufficient to cover her emails or the State Department wouldn’t have given them to us.

Campbell: So Chairman Gowdy, what do you do now? If she destroyed evidence under subpoena, and if, and she is now deepening that lie, what are you going to do about it? What can you do about it?

Gowdy: Well, my first, you know, I had another job before I got to Congress…

Gowdy: And that one had certain powers, and different powers than the one I have now. My obligation now is to write the final definitive accounting of what happened in Benghazi, which is why I’m interested in her records. I could care less about yoga and bridesmaids dresses. I want the documents that relate to Benghazi. She claimed that she turned the full record over to the State Department, but we learned a week or so ago that there are at least 15 emails or portions thereof that she did not turn over.

Gowdy: So you know, at some point, the Speaker has a decision to make, or another committee of Congress has a decision to make. I don’t have the authority to subpoena her server. We have asked her to turn it over to a neutral third party so that person, an archivist, and expert in federal records, can make sure that everything that should be in the public domain is in the public domain. I do not care about her personal stuff. I do care about every document that the media, the public, and Congress is entitled to. And we’ll never know the answer to that question until somebody other than her lawyers looks at the server.

Campbell: Yeah, and I mean, you know, when she says oh, I turned over, I mean, that’s like in any case, the accused saying well, I made the decision about what evidence might be used or not. No, you don’t make that decision. All the evidence has to be presented, right?

Gowdy: Well, look at the three explanations she’s come up with so far. First thing she said was I used a single device for convenience. Well, we know that’s not true. Then she said oh, those emails from Sidney Blumenthal were unsolicited. Well, we now know that’s not true. But the big thing she said is you don’t need to worry about my email arrangement, because I gave everything to the State Department. I erred on the side of inclusion. And next thing we know, we’re getting emails from Sidney Blumenthal that involve her that she never even turned over to the State Department. So we know what she turned over was not complete, just in the area of Libya. About other countries and other issues when she was the Secretary of State, it’s outside my committee’s lane, but I would think the public and the media and Congress would be interested in whether or not there’s a full record of her tenure as Secretary of State. We know it’s not. We just don’t know how deficient the record is.

Campbell: Chairman Gowdy, I know you’re reluctance to use the word lie. I had that same reluctance when I wore the Congressional pin. You know, oh, this is not true, it’s a falsehood, it’s blah, blah, blah, all that. There’s so much of this, and so much evidence from this woman now, and she was running for president, and the intent is clearly there that she doesn’t want people to know what she did, I think she is lying.