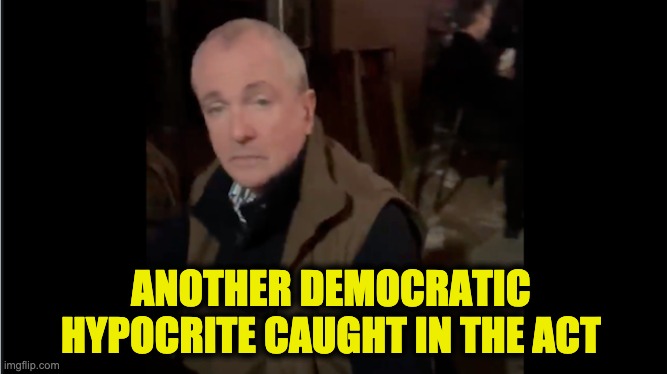 What is it with these Dems, thinking the rules don’t apply to them? Do they genuinely believe, “Do as I say, not as I do?”

Murphy and his family were caught in a restaurant, breaking his own rules, and caught hell from a constituent who discovered he was mask-less. Executive order 183 said in part that Face coverings are required in indoor public spaces and in outdoor public spaces when social distancing is difficult to maintain.

In the video, you hear a woman speaking to the governor and his party. Using “strong” language you can hear her say:

“Hey, how ya doing?” the woman asks the governor. Another voice in the background is heard saying, “you’re such a d***.”

The main woman’s voice is heard again saying, “You’re having fun with your family and in the meantime, you’re having all other kind of bulls***going on.” The governor can be seen taking a bite of food as the berating continued.

Once she starts speaking, you can see the Governor putting his mask on.

Making the Governor’s mask-less dinner more ironic is that over the weekend, he renewed his draconian orders,

Gov. Phil Murphy extended the public health emergency over the weekend as the state topped 300,000 total COVID-19 cases since the start of the pandemic in March.

“The COVID-19 pandemic is far from over,” Murphy warned in a Sunday statement. The public health emergency is the ninth one he’s filed since the pandemic first hit the state.

It requires reauthorization every 30 days, while a broader state of emergency has been in effect indefinitely. With these orders in place, Murphy is able to extend a litany of restrictions on business and public gatherings in a bid to reverse the recent surge of the virus

Ah …..Hypocrisy thy name is Democrat.