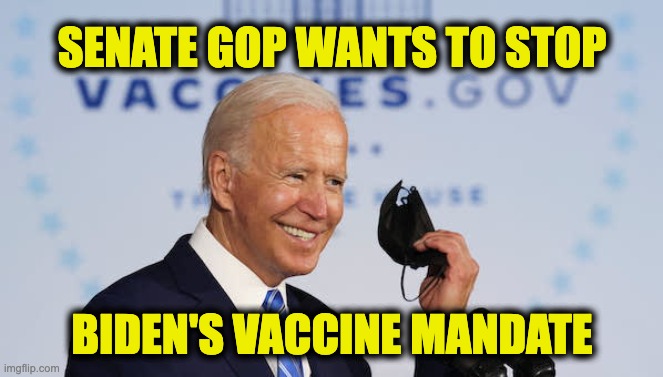 There is no doubt that President Joe Biden’s COVID-19 vaccine mandate is unpopular among Americans, and it now appears as though the Republican Party is going to take a stand against it. GOP wants to stop mandate

Biden, who has been pushing the inoculations from the very moment that he stepped foot in the Oval Office, not only made it mandatory for all federal workers to receive the controversial shot but also for employees at private companies with more than 100 people in the workforce.

This latter distinction has not sat well with the GOP.

Sen. Mike Braun of Indiana is leading 41 Republican senators on Wednesday to “strike down” Biden’s rule, which mandates employees — at private businesses with 100 workers or more — to receive COVID-19 vaccines.

Republicans blasted the mandate, which Biden introduced in September, and the forthcoming formal rule from the Occupational Safety and Health Administration (OSHA), which is expected to be released in the coming days — calling it “unacceptable” and an order that “warrants review by Congress.”

The list of the senators on board is extensive and with plenty of room to grow.

Eventually, it has to get to sixty to avoid a filibuster,

Anti-vaccine mandate protests have been popping up all over the United States of late, with the latest and most noticeable taking place all over New York, with firefighters and police forces joining together to shut down the Brooklyn Bridge just days ago.