GOP Debate #10: Rubio Pummels Trump, But Will it Matter? 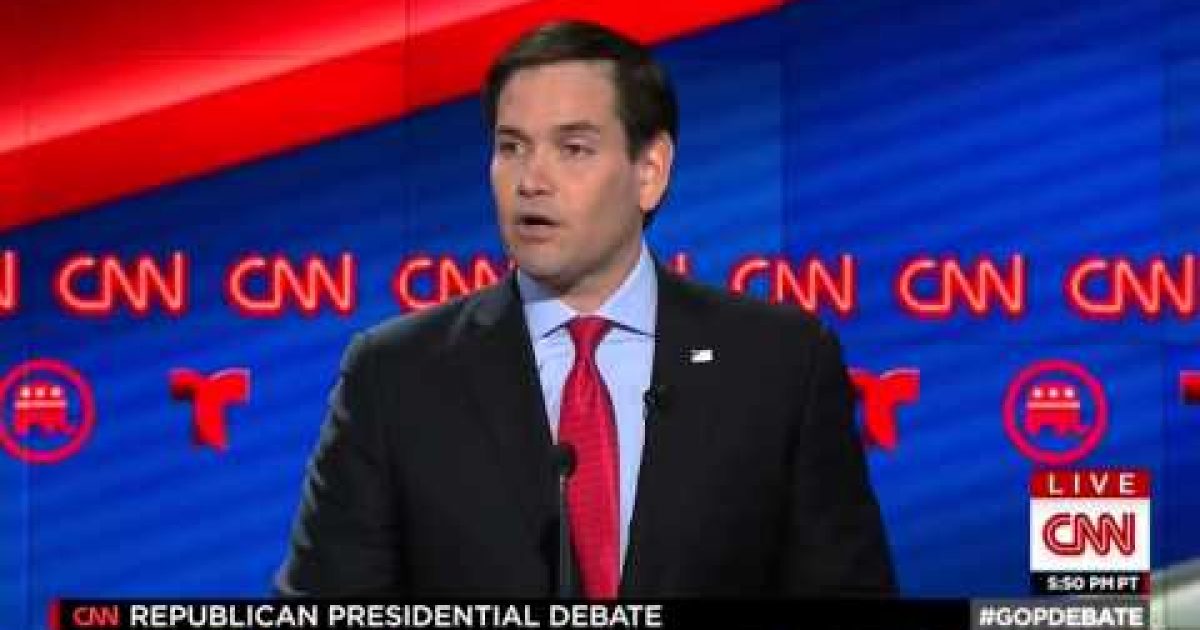 Sometime between the South Carolina debate the night before Valentines Day, and the Texas debate on Feb. 25, Marco Rubio grew a pair of cojones.  He took the tenth GOP debate to Donald Trump and shredded him to pieces. Ted Cruz whipped the Donald also but not the the same extent as the Florida Senator. For the first time the two remaining senators attacked Trump instead of each other.

Rubio’s performance last night was not only the best in this debate, it may have been the best performance in all the debates this election season. He pummeled Trump on topics such as immigration, Obamacare, Israel, and how the billionaire screws the little guy.  At times Trump did seem rattled. While Cruz was very good, the fact that he wasn’t as memorable as Rubio probably helped the Florida senator establish himself as the Trump alternative.

Interestingly Donald Trump had a “yuge” advantage in speaking time, but that wasn’t because he got the most questions, but because he had to respond to attacks the most.

The problem for Rubio supporters is it may not matter at all. The SEC primaries are in four days and Super Tuesday is two weeks later. During the first two weeks of March, 1294 delegates will be selected, that’s 52% of the total 2,472 delegates to the July convention.  Donald Trump is leading in almost all the states electing delegates during those fifteen days, for Rubio to survive he needs build support very quickly which is highly unlikely (but not impossible)

From his very first response, Rubio was all over on Trump, hitting him hard on his biggest issue illegal immigration. Trump was asked to explain the difference between his immigration stance and Ted Cruz’s. Both say the will kick out all the illegals, but while Trump would let back what he calls “the good ones” Cruz would make them stay out because they would take away the Americans’ jobs.

Rubio’s immigration question tried to get him into a fight with Cruz. Wolf Blitzer asked a question which seemingly has been asked in the nine; basically Cruz says you support amnesty no go beat him up. Rubio laid out his immigration plan without attacking the Texas senator. But he ended his answer attacking Trump for hiring illegal immigrants to build his Palm Beach Fl. property.

Trump answered by saying he hired illegals in Palm Beach Florida because no Americans would take the work. And the two went back and forth until Rubio went in for the kill.

Rubio: You hired some workers from Poland…

Trump: No, no, I’m the only one on the stage that’s hired people. You haven’t hired anybody.

Rubio: In fact, some of the people…

Rubio: Yes, you’ve hired a thousand from another country…

Trump: You’ve had nothing but problems with your credit cards, et cetera. So don’t tell me about that.

Rubio: Let me just say — let me finish the statement. This is important.

Trump: You haven’t hired one person, you liar.

Rubio: He hired workers from Poland. And he had to pay a million dollars or so in a judgment from…

Rubio: That’s a fact. People can look it up. I’m sure people are Googling it right now. Look it up. “Trump Polish workers,” you’ll see a million dollars for hiring illegal workers on one of his projects. He did it.

Rubio was correct in 1991 Trump lost a law suit because he illegally used non-union workers from Poland to build Trump Tower:

“Testimony established that Donald Trump visited the 57th Street site and observed Kaszycki’s Polish workers, noting that they were ‘good hard workers,’” the U.S. District Court for the Southern District of New York wrote in its opinion in 1991. “Workers also observed Trump visiting the job site of the Bonwit Teller demolition job.” And it’s likely that he would have been able to distinguish between union and non-union workers: “The Polish workers were obvious not only in numbers but also in appearance. In contrast to the union workers the non-union, Polish workers were distinguished by the fact that most of them did not wear hard hats. In addition, the Polish workers staged several very visible work stoppages because they were not being paid their wages.”

Later on Trump was asked if Mexico wouldn’t pay for his wall on the southern border would he begin a trade war with our neighbor to the south. After Trump answered, Rubio hit him up again:

Rubio: Yeah, a couple points. If he builds the wall the way he built Trump Towers, he’ll be using illegal immigrant labor to do it. The second…

Trump: Such a cute sound bite.

Rubio: But it — no, it’s not a sound bite. It’s a fact.. Again, go online and Google it. Donald Trump, Polish workers. You’ll see it.

Another classic was during the healthcare question. Trump believes that the only thing necessary to bring down healthcare costs is to remove the restrictions on insurance companies from selling across state lines. And when Rubio challenged him on the specifics Trump said it again. Rubio took a page from Chris Cristie’s attack in the New Hampshire debate:

Trump: I watched him repeat himself five times four weeks ago…

Rubio: … I just watched you repeat yourself five times five seconds ago…

Trump: I watched him meltdown on the stage like that, I’ve never seen it in anybody … I thought he came out of the swimming pool…

Yikes, that had to hurt.

Rubio also became the first candidate to hit Trump about the Trump University accusations of fraud and the lawsuit brought by some of the people who paid to attend, something we covered here last week

Ted Cruz was strong (although he has been stronger). His most constant attacks on Trump (that he donated to Democrats) may have worked the first few times, but after awhile they sounded redundant. His most powerful line was after Trump asked him for an apology, Cruz responded with

The Texas senator may have also scored points when he claimed that Trump endorsed single-payer health care during one of the debates.

Trump: No, I said it worked in a couple of countries…

Cruz: But you’ve never stood on this debate stage and says it works great in Canada and Scotland and we should do it here.

Cruz: Did you say if you want people to die on the streets, if you don’t support socialized health care, you have no heart.

Trump: Correct. I will not let people die on the streets if I’m president.

Cruz: Have you said you’re a liberal on health care?

Trump: Excuse me. Let me talk. If people…

Cruz wasn’t totally accurate, during the first GOP debate on FNC, moderator Bret Baier said to Donald Trump, “15 years ago, you called yourself a liberal on health care. You were for a single-payer system, a Canadian-style system.” Trump responded with, “As far as single payer, it works in Canada, it works incredibly well in Scotland. It could have worked in a different age, which is the age you’re talking about here.”  That answer seemed to say it wouldn’t work in the U.S. anymore. However, Trump has endorse single payer in the past.

Ohio Governor John Kasich had a good night playing “the adult in the room.” He had a calm and confident tone and avoided getting in fights with his GOP opponents. Kasich provided the most details of his proposals. Arguably John Kasich is the most qualified candidate left in the race, a successful governor, who was on the Armed Services committee and helped to almost balance the budget when he was in congress.  However his pitch hasn’t resonated with voters, and his performance last night was overshadowed by the top three.

Dr. Ben Carson continued to whine about not getting much time, not realizing that because the extra time of the other candidates were a result of their interjecting themselves into the answers of others. Although one of Carson’s time complaints was the best line of the night. After one exchange where other candidates were attacking each other, he asked, “Will someone attack me?” But none of the other’s attacked him so he could respond and get more time.

Carson’s answer on evaluating a potential Supreme Court justice included New Testament reference so obscure that most of my Christian friends had no idea what it meant. His SCOTUS answer ended with, “The fruit salad of their life is what I will look at.”  Apparently that referrers to chapter 7 verse 15 of the book of Matthew, which talks about false prophets, “You will know them by their fruits. Grapes are not gathered from thorn bushes nor figs from thistles, are they?”

But if most of my very observant Christian friends had no idea of what he was talking about, how would the average person watching the debate know? There is no reason for Dr. Carson to still be in this race.

If yesterday’s debate did anything is it solidly established the front-runners as Trump, Rubio, and Cruz in that order.

Rubio did what he had to and more.  But in the end it is reminiscent of some MLB game’s in August. Sometimes a last place team will go on a streak and pile up wins against the league leader. Those streaks give fans hope but in the end it’s really too late to make a run at the pennant.

Will Rubio’s attacks give him enough momentum to win some primaries, or will it be just like those August streaks by last place teams?

We begin to know in four days.

Andrew Malcom has a great take on the debate at IBD which you should read here.  And as usual my friend Ed Morrissey has the second best analysis of the debate (next to mine) at Hot Air, which is also a must read.