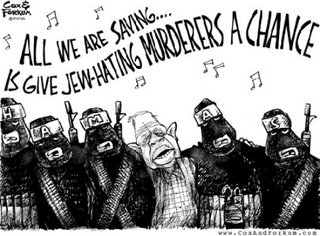 Tevye said in Fiddler on the Roof, “Lord I know we are the chosen people, but once in a while couldn’t you choose someone else” (Hats off to The Last Best Place for alerting me to the Cartoon which was created by Cox and Forkum ). There is so much Jew hatred today in today’s news that more than every we can understand what Tevya was taling about.

The Sudan
Field Marshal Omar Hassan of the Sudan (he even sounds like a Nazi), a vicious murderer, is blaming all of his troubles on the Jews. Apparently the massacres in Darfur are myths developed to pull attention from Israel’s treatment of the Palestinians. How creative, this horrid disease on the world has killed hundreds of thousands of people and can twist it all around to blame it on Israel. In an interview with the Jpost he says:

“You cannot at all rule out the Israeli role in any problem that any Arab country is facing because the security of Israel is based on weakening Arab states,” he said. “Israel would do everything through their media and their different mechanisms – you can’t deny they have such influence in circles all over the world so they can do what they want.” Appearing to believe that western media are controlled by their governments, Field Marshal al-Bashir claimed that America and Britain had asked Sudan to recognize Israel and hinted negative coverage of the Darfur conflict could stop as a result. “Since we took power, these messages have never stopped. They (America, Britain and Israel) would like to divert the Arabs from the central cause of the Arabs, which is Palestine. “This is a camouflage for what is happening in Iraq, in Palestine, in Afghanistan.”

Damn We Are Good !!!! We Jews control the media and run the banks, we control foreign policy and assassinate Russian Spies (Pat Buchanan says some guy named Goldfarb made it all up) and at the end of the day we still have time to take out the garbage and play with the kids.

In Iran a Conference for Holocaust Deniers
On a related note, Iran is hosting a conference for Holocaust deniers (I guess Pat will be at that one also, that is unless we have the banks cancel his cash card). Acording to Al Bawaba an Arab owned news service ( which I assume has no relation to Ba Bawawa dispite the similarity in names)

An international conference dubbed “Holocaust: World Prospect” will be held by the Iranian Foreign Ministry’s Institute for Political and International Studies (IPIS) following International Human Rights Day (Dec 10). According to IRNA, the two-day conference on holocaust will open in Tehran on December 11 and will continue until December 12. According to a report released by the Public Relations Department of the Foreign Ministry’s IPIS, while aiming to fully respect Judaism, the event will attempt to focus on the issue “away from any propaganda or political orientation.” “This conference fully respects the Jewish religion and is away from politicization and propaganda,” the statement said. Topics include “anti-Semitism, Nazism, and Zionism: collaboration or animosity; the concept of Holocaust and its roots; views of revisionists; denial or admittance of gas chambers,” it added.

No Word yet whether CNN, The Daily Kos or French President Chiraq will attend.

A Great Hate From Britian

This Baroness must have read last March’s Paper written by Professors Stephen Walt of Harvard’s Kennedy School of Government and John Mearsheimer of the University of Chicago paper addressing the power of the Jewish Lobby. Or Mein Kampf or anything written by Pat Buchanan:

Speaking at Edinburgh University at a meeting attended by representatives of the Israeli Ministry of Foreign Affairs, Tonge defended comments she made at September’s party conference that “The pro-Israeli lobby has got its grips on the western world, its financial grips. I think they’ve probably got a grip on our party.” In Edinburgh, Tonge clarified her remarks, saying there had been “extensive” research in the United States supporting her contention that the “Israel lobby” had a disproportionate voice in Anglo-American foreign policy, referring to a paper written by John Mearsheimer and Stephen Walt that appeared in the March 23, 2006 issue of The London Review of Books.

Pam (from Atlas Shrugs) didn’t Shrug this one off

A (in Sweden we call them) Quran School (you may call them madressa…) in Denmark — this is, kind of, extra education during Saturdays in ordinary culturally Arabic schools — has books which calls for the necessity to KILL EVERY JEW in order to achieve peace in the Middle east. But also Bush shall be killed, according the book. Interresting is that an intellectual and Middle east experts in Denmark thinks that this is nothing to be upset with, because thats the way they talk; a tradition! However politicians in Denmark are upset and will take action. They say that the problem is that these books is used in locals borrowed by the local authorities. Seven young danish muslims who had planned terror attacks were caught by the police in September.

Danish politicians say the problem with education to kill Jews is that the books are used in public locals. The content may be illegal but that is not the main topic! The illegal thing –the main topic is when Muhammed was painted in violent, critical cartoons. The illegal thing, the main thing, is laws prohibit discreditation of ethnic groups. Is it okay according to discreditation laws (or to human rights) to teach people that Jews should be killed?! I’m sure that the kids in the muslim schools are not expected to kill Jews immediately, but the message is crystal clear as is the “non-humanification” (hmm, invented this word now) of Jews. That message shall not be permitted! Period. Denmark, though, is slightly better than Sweden. Aargh!

Like a lot of parents I often go into my children’s room to watch them sleep. These days when I look at my kids sleeping in their beds’ looking so innocent I worry that across the world innocent Jewish children are being de-humanized. How the radical thieves who have stolen and now control Islam are teaching their children to kill my children. I think about the European and American press portraying Jews using old horrible stereotypes, I see anti-Semitism growing on US Campuses. And just like 70 years ago I see much of the world refusing to acknowledge the scope of the problem or act to prevent it.

A friend once told me that all Jewish holidays are based on the same premise, “they tried to kill us —we won—lets eat!” It is partially true, some very joyous holidays fit into that category such as Purim and Chanukah. Then there are the others based on a totally different idea: they tried to kill us THEY won, and few of us survived by the grace of G-d. You know, holidays such as Tisha B’Av and Yom HaShoah. Call me an alarmist but I am scared! Every time I open a newspaper or turn on the TV is becoming increasingly clear to me that we may be facing the early stages of one of those “They tried to kill us” periods.

Anti-Jewish acts and statements across the world are increasing exponentially. And we haven’t seen the worst of it. One day those children, who are having daily hatred lessons in Muslim schools or American College Campuses, will be adults and they will be going after my kids and yours.