Liberals Try To Erase Classic Movie History, ‘Frankly They Don’t Give a Damn!’ 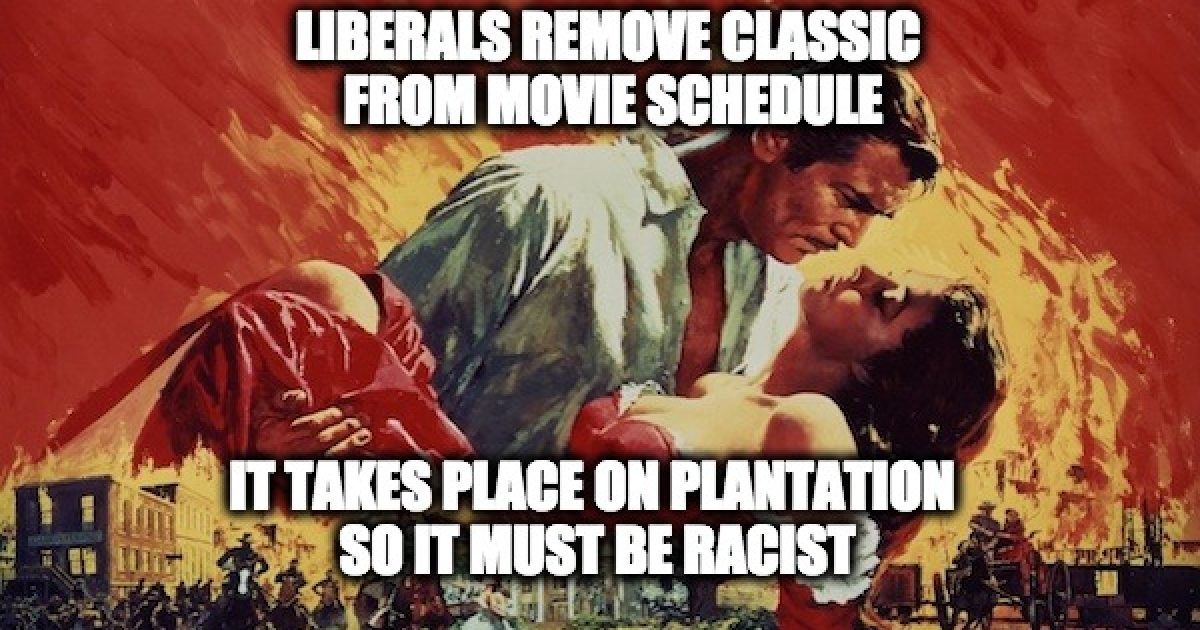 On Friday, WREG reported that the classic movie Gone With The Wind will be removed from a summer movie series by a local theater group after receiving “feedback” from patrons who apparently think it is racist.

The Orpheum Theatre Group decided not to include the 1939 movie about a plantation in the Civil War-era South in its 2018 Summer Movie Series after feedback from patrons following the last screening Aug. 11.

“As an organization whose stated mission is to ‘entertain, educate and enlighten the communities it serves’, the Orpheum cannot show a film that is insensitive to a large segment of its local population,” the theater’s operators said in a statement.

Memphis’ population is about 64 percent African-American.

The historic theater in Downtown Memphis has shown the movie for decades, but this year’s event “generated numerous comments,” leading to the decision.

“While title selections for the series are typically made in the spring of each year, the Orpheum has made this determination early in response to specific inquiries from patrons,” the group said.

Reaction on social media was pretty much what one would expect.

“This is the stupidest thing I have read!! I will not be attending any more Orpheum events. If they cancel showing Gone With The Wind, they better not show the movies Roots, The Color Purple, or 12 Years A Slave. Our country has really turned into the joke of the world,” one person said on WREG’s Facebook page.

“We have literally lost our minds in this country! Let’s just erase all the history so we can rewrite it! Not me. I want to see every movie, book, statue, tribute, monument, memorial, and site of every concentration camp to ensure these horrors never happen again. If you don’t teach and learn from our past you will be destined to repeat it!” another person said.

“Whaaaaaaaat???! Gone With the Wind is a CLASSIC movie! It is historical and one that I believe everyone should see at least once in their lifetime. If we start banning all mention of our history, then our future generations will be doomed to repeat the past because they are not taught about what happened and why ” a third critic said.

#saturdaymorning
If we let the Left continue 2 win this culture war,America will be Gone with the Wind! It’s CRAZY!https://t.co/hnO5PG55tz

Criticism of the movie is nothing new.  An article published in 2015 at the New York Post said Gone with the Wind should go the way of the Confederate battle flag:

If the Confederate flag is finally going to be consigned to museums as an ugly symbol of racism, what about the beloved film offering the most iconic glimpse of that flag in American culture?

I’m talking, of course, about “Gone with the Wind,’’ which won a then-record eight Academy Awards, including Best Picture of 1939, and still ranks as the all-time North American box-office champ with $1.6 billion worth of tickets sold here when adjusted for inflation.

True, “Gone with the Wind’’ isn’t as blatantly and virulently racist as D.W. Griffith’s “Birth of a Nation,’’ which was considered one of the greatest American movies as late as the early 1960s, but is now rarely screened, even in museums.

The more subtle racism of “Gone with the Wind’’ is in some ways more insidious, going to great lengths to enshrine the myth that the Civil War wasn’t fought over slavery — an institution the film unabashedly romanticizes.

What’s next in the left’s war on history?  The Great Pyramids?  They were built with slave labor by slave owners, after all.  Where does it all end?

Sadly, it seems that the left’s cleansing of U.S. history will never end.

*NEW* BREAKING ALERT: If You Get THIS Phone Call From CPB-HANG UP AS QUICKLY AS POSSIBLE- It’s A SCAM- Here’s What It Does
America's Freedom Fighters