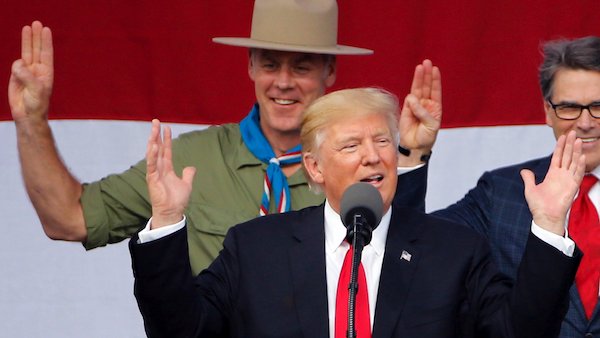 For much of the campaign, we were subjected to redundant and ridiculous assertions that President Trump and/or his policies were fascist, reminiscent of Nazi Germany, or even the next Hitler. Thankfully most of those thoughtless charges seemed to vanish after the election…until now. President Trump’s address to the National Boy Scout Jamboree on Monday evening was used by liberals as an opportunity to innapropriately compare him to Hitler.

For their information Presidents have been addressing the Boy Scout Jamboree since FDR in 1937. As a former Boy Scout myself I remember that each President of The United States serves as the honorary president of the Boy Scouts of America and that’s the reason every president is invited to address the Jamboree.

“Unhinged liberals and radical left-wing activists likened President Trump’s Monday night speech before the National Boy Scout Jamboree with Nazi Germany; comparing the President’s address with those given by Adolf Hitler during the 1930s.

“President Donald Trump received a warm reception from scouts and leaders at the 2017 National Boy Scout Jamboree, where he delivered a speech to the nearly 40,000-strong crowd.

“‘A lot of love in this big, beautiful place,’ Trump said to Jamboree-goers. At one point, the massive crowd began chanting ‘We Love Trump!’

“Liberal activists did not view the speech too kindly, with many conflating the imagery with Hitler’s address before Nazi Youth rallies commonplace throughout the 1930s.”

Among those who made the comparison on Twitter were:

Jon Wolfsthal who made the Hitler Youth comparison even though, ironically he was an advisor to Barack Obama, the most anti-Semitic president since FDR

Is nothing safe? @realDonaldTrump turns @boyscouts event into Nazi Youth rally. Boy Scouts must repudiate such a disgraceful display.

Nancy Lee Grahn, an actress on the Soap Opera General Hospital who should have studied a bit more history and a little less of the Stanislavski method tweeted:

Tragically, #boyscouts in 2017 applaud Trump just like the all blonde blue eyed youth did for Hitler in the 30’s.

John Haltiwanger, the political writer for Elite Daily, showed he is still suffering from the damage he suffered when Tucker Carlson cleaned his clock in January when he tweeted:

Trump has officially succeeded in making the Boy Scouts feel a bit like the Hitler Youth, which was made mandatory by the Nazis in 1936. https://t.co/9HhnQpzkA2

Freelance journalist Deanna Rilling from Vegas, took a gamble that she wouldn’t seem callous about the Holocaust when she tweeted:

I feel like I’ve seen what is happening at the #BoyscoutJamboree before… pic.twitter.com/BfdnB5XaQM

No. That was Obama’s address to the BSoA. Trump’s speech was akin to Hitler addressing his SS youth army.

A twitter search of Trump+Hitler will reveal that hundreds of liberals made comparisons between the President and Hitler in the 24-hours since the President’s Boy Scout speech.

When these and other people try to compare President Trump to Hitler they are displaying their laziness and/or lack of command of the English language. Even if one disagrees with Trump, or really hate a speech he makes to a group, there is nothing about this president that makes a Trump-Hitler reference appropriate.  Some of my family were murdered by Hitler and his Nazis and/or spent time in his concentration camps. Allow me to explain to the leftists who made the reference when it would be appropriate.

If Trump never killed, cremated, and buried people in mass graves, then the Hitler comparison is probably not accurate.

Hitler wrote a book called Mein Kampf in which he spoke of his hatred toward Jews and previewed his “final solution:

The black-haired Jewish youth lies in wait for hours on end, satanically glaring at and spying on the unsuspicious girl whom he plans to seduce, adulterating her blood and removing her from the bosom of her own people. The Jew uses every possible means to undermine the racial foundations of a subjugated people…..the personification of the devil as the symbol of all evil assumes the living shape of the Jew….And so he [the Jew] advances on his fatal road until another force comes forth to oppose him, and in a mighty struggle hurls the heaven-stormer back to Lucifer… Hence today I believe that I am acting in accordance with the will of the Almighty Creator: ‘by defending myself against the Jew, I am fighting for the work of the Lord.’

According to Wikipedia Donald Trump wrote 18 books, I only read one (“The Art of the Deal” which contained no Antisemitism nor did it foreshadow a mass genocide of any group).  If any of the other books contained quotes such as the ones by Hitler above which talked about the destruction of one group, I guarantee you that they would have been fodder during the campaign season. Therefore since Trump never wrote a book about destroying a race, or ethnic group, it isn’t realistic to call him Hitler.

The Nazis conducted horrible painful medical experimentation on humans. Perhaps the most well-known were the experiments that Josef Mengele conducted on twins and other victims at Auschwitz, through these experiments he hoped to prove the superiority of the Aryan race. He experimented on over 1,500 pairs of twins and other Jews and Gypsies, injecting dye into their eyes blinding them, or chloroform into their hearts killing them, sew twins together trying to create conjoined twins, forcing them into freezing water (like the picture below), and other experiments too horrible to repeat.

Did Donald Trump authorize horrible medical experimentation on people like Mengele did? If he was doing that, believe me, it would be on the front page of the Washington Post (perhaps even with a named source).  Unless the Post is covering up similar experimentation like Mengele, a Hitler youth comparison is just plain ignorant.

After the Nazi’s gassed their victims they collected their hair, their clothes, glasses, gold teeth, and even artificial limbs to be used by the Reich. Perhaps I was watching “Family Feud” instead of the news the day Donald Trump killed people and recycled what was usable. But if I didn’t miss it, well then Donald Trump is not like a Nazi.

I know… perhaps Trump gassed innocent victims, collected their gold teeth and artificial limbs etc. while they were sleeping so no one complained and the mainstream media didn’t cover it. Maybe John Haltiwanger wrote about it in Elite Daily and since I don’t read that site and that’s why I don’t know about those crimes.

And what of the camps? Does Donald Trump round-up people he doesn’t like, force them into box cars like cattle and deliver them to concentration camps? Because if he ever did, I would be the first to compare him to Hitler.

The truth is Donald Trump never wrote a book about a future genocide, never forced people to put tattoos on their arms, or crowd them into death camps where they would suffer torture till they were gassed, shot, thrown in ice water, or died some other horrible death. He never ordered the mutilation of corpses by taking out what can be reused. And he never had bodies thrown in mass graves or had them cremated.

Until there is evidence of any of the above, a comparison of Donald Trump to Hitler and/or the Nazis is false, inappropriate, and an example of careless writing. But even worse is the fact that the Holocaust was horrible, and hopefully one time ever event. When someone mentions Hitler or Nazis it should place pictures in their minds similar to the above, not pictures of President Trump.

But when these haters use the Hitler It also cheapens the memory of my relatives and the families of the millions of others who suffered during the Holocaust at the hands of Hitler.

So liberals calling Donald Trump Hitler. If you want to call Donald Trump other names go ahead. Despite eight years of the Obama Administration, it’s still a free country. But if you do decide to call President Trump names–leave the Holocaust out of it, no Hitler, no Nazis NOTHING!  Inappropriate references to the Holocaust is a disservice anyone reading your tweets or other compositions. But much more importantly it is a disservice to the memory of the suffering of the real victims of the real Hitler.