WAPOs Glen Kessler: KY Democrat Alison Lundergan Grimes Should Be Ashamed of Herself 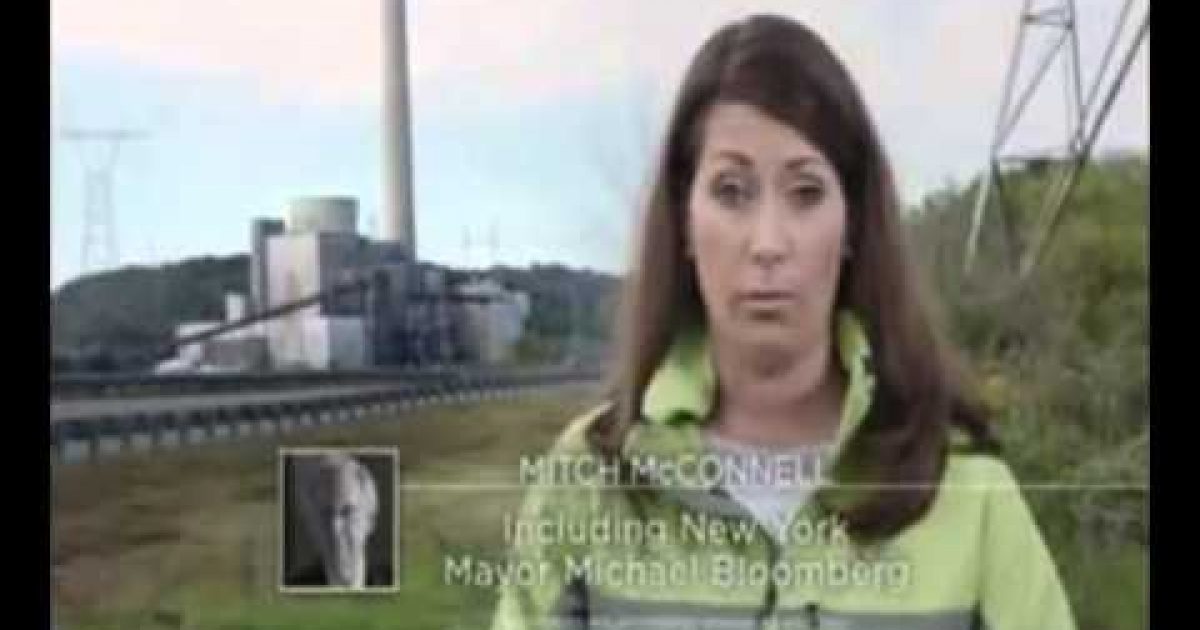 Parler Facebook Twitter Flipboard
Washington Post” fact checker Glenn Kessler ripped apart Kentucky’s Democratic Senate Candidate Alison Lundergan Grimes for running an ad that not only contained a debunked claim but added another falsehood for good measure. Kessler wrote,”We realize that the game of politics is sometimes played rough in Kentucky, but this ad is beyond the pale. Indeed, it is likely the worst ad of a nasty campaign year. Grimes should be ashamed of herself.”

I am Alison Lundergan Grimes and this is the Big Sandy power plant in Louisa, Kentucky. They are shutting down half the plant and laying off their workers because Mitch McConnell didn’t fight to get the scrubbers it needs to reduce coal emissions. Instead, Mitch and his wife pocketed $600,000 from enemies of coal, including New York City Mayor Michael Bloomberg. I approve this message because the difference between Mitch and me is I will fight for these jobs and no New York anti-coal billionaire will ever buy me off.

According to the communications director for the company which owns Big Sandy, Mitch McConnell had nothing to do with the scrubber decision. It is true that McConnell voted against the bill which designed to make scrubbers cheaper, but the bill passed anyway and the company decided against retrofitting Big Sandy anyway:

Retrofitting the plant for the new coal regs “was not in the best interests of our customers” because of the potential rate increase, said Melissa McHenry, AEP’s director of external communications. She said there is nothing that McConnell could have done to help the company get the scrubbers, since it is a state regulatory issue. When a company makes a decision like this, it makes a filing that seeks recovery of the costs of investment. “There is no involvement of a senator in that process,” she said.

The Grimes campaign defends this language on the grounds that McConnell voted against budget plans that would have boosted funding for clean coal technology — research that the campaign claims might have made scrubbers less expensive. But, despite McConnell’s negative vote, the spending bills were approved and the investments were made anyway. Most of the votes cited by the Grimes campaign took place after AEP’s decision to close the plant, so there’s really no justification for this statement.

The way Grimes gets to the $600k is truly unique. McConnell’s wife, former labor secretary Elaine Chao joined the Bloomberg Philanthropies’ advisory board in 2012 (for which she was paid $9,400/year). The year before Chao joined the board, Bloomberg Philanthropies committed $50 million over four years for the Sierra Club’s Beyond Coal initiative, which aims to retire one-third of dirty coal plants by 2020.

“The decision to provide funding to Sierra Club’s Beyond Coal initiative took place before Elaine Chao joined the board,” spokeswoman Meghan Womack told The Fact Checker. “Bloomberg Philanthropies’ board members do not vote on individual initiatives or program spends.”

”Even if you don’t believe Womak, Chao only received $9,400, so how did Grimes get to $600K?
Apparently Chao was also on the board of directors of Wells Fargo, the megabank. According to the bank’s proxy statement for the 3 years she has been on the board, Chao (and all board members) received $685K. Grimes added $685K and $9,400 and got a total of $600K.

Wait a second. Wells Fargo is a bank. Why does Grimes lump it among “enemies of coal”? The Grimes campaign justified this on the grounds that in a 2013 report Wells Fargo said that it had been curtailing its financing of “mountain top removal” (MTR) coal operations.

But Jennifer G. Dunn, a Wells Fargo spokeswoman, said Wells Fargo adopted this policy in 2006 — five years before Chao joined the board. It was just not formally mentioned in a Wells Fargo external document until 2013, she said.

Even worse is Grimes’ contention that Wells Fargo is anti-coal, since the bank still finances coal companies. They finance coal companies to such a huge extent that environmental groups have given the bank a “D” rating for financing coal-fired plants.

Kessler ends with words that seem more like condemnation of the Democratic Party candidate than a conclusion:

So let’s review. Grimes first makes a nonsense claim that McConnell should have somehow arranged for scrubbers in a privately-owned plant that would have sent utility rates soaring.

Then, in a desperate effort to somehow cite Bloomberg’s name, she accuses McConnell of being bought off by a $9,000 payment to McConnell’s wife (who is independently wealthy). Citing a $600,000 number from “enemies of coal” is especially silly, as it mostly involves money from a bank that continues to finance coal companies.

Most striking, Grimes puts her own credibility on the line by uttering these recidivist claims herself, rather than relying on an unseen narrator.

We realize that the game of politics is sometimes played rough in Kentucky, but this ad is beyond the pale. Indeed, it is likely the worst ad of a nasty campaign year. Grimes should be ashamed of herself.