Creepy Joe Is Also Ignoring His Own Words, "Women Should Be Believed" 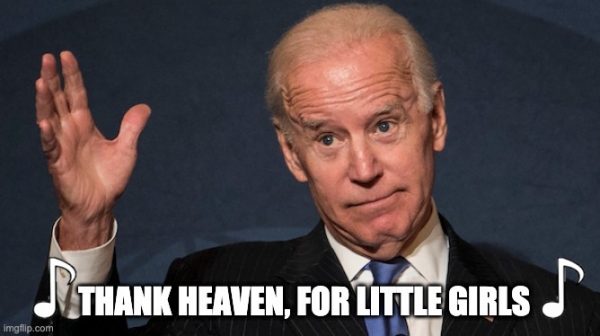 Democrats and the media appear to be giving likely Democrat presidential nominee Joe Biden a “pass” on sexual assault allegations dating back to the early 1990s; a courtesy not granted to Associate Justice Brett Kavanaugh during his confirmation hearings that turned into what many considered a witch hunt, critics argue.

According to Fox News, “The woman who has accused…Biden…is calling out the media and several politicians being considered to join the former vice president on the 2020 ticket for ‘protecting a powerful man’ while attempting to ‘silence’ her in the process.” Even in the face of her mother’s phone call to Larry King:

Will they cover it?

RT so they can’t ignore! pic.twitter.com/gbmjNrkf7v

And Jason Rantz, a Seattle, Wash., conservative radio commentator has been especially critical of Senators Maria Cantwell and Patty Murray. They’re his senators, both liberal Democrats from the Evergreen State. In an opinion posted at MyNorthwest.com, Rantz fumes, “Murray and Cantwell immediately and unequivocally sided with Dr. Christine Blasey Ford’s allegations against Brett Kavanaugh.”

In a separate Fox News article, the New York Times is put on the spot for having taken “so long to report the sexual assault accusation that Tara Reade levied against…Biden.” Fox says the newspaper now appears to have ignored the “latest development” in Reade’s story.

The allegations are just that—allegations—and Biden presumably will have an opportunity to answer them in the court of public opinion, should he choose to do so. But what is happening here allegedly is far different from what occurred when the allegations of misbehavior against Kavanaugh were made. Almost from the moment those assertions surfaced, many on the left reflexively presumed Kavanaugh guilty.

Reade, quoted by Fox News, commented, “I’ve basically had no substantive support from women’s groups that are considered liberal or Democratic. I’ve had no support from any Democratic candidate, although I’ve reached out. And I’ve received either slanted reporting that ended up being talking points for Biden’s campaign or silence from the mainstream media. So that’s my contention and my concern.”

This story essentially reinforces the notion among conservatives that there is a liberal bias in the establishment media and it tilts decidedly left. The media does not appear to be in any hurry to rebut allegations of bias.

Of course, Biden denies the incident, But then again perhaps he just forgot–he does seem to have dementia.

Besides in January 2018 Creepy Joe was on TV saying women should be believed.

Joe Biden in January 2018: "Women should be believed" #MeToo pic.twitter.com/9OP8xVdFbg