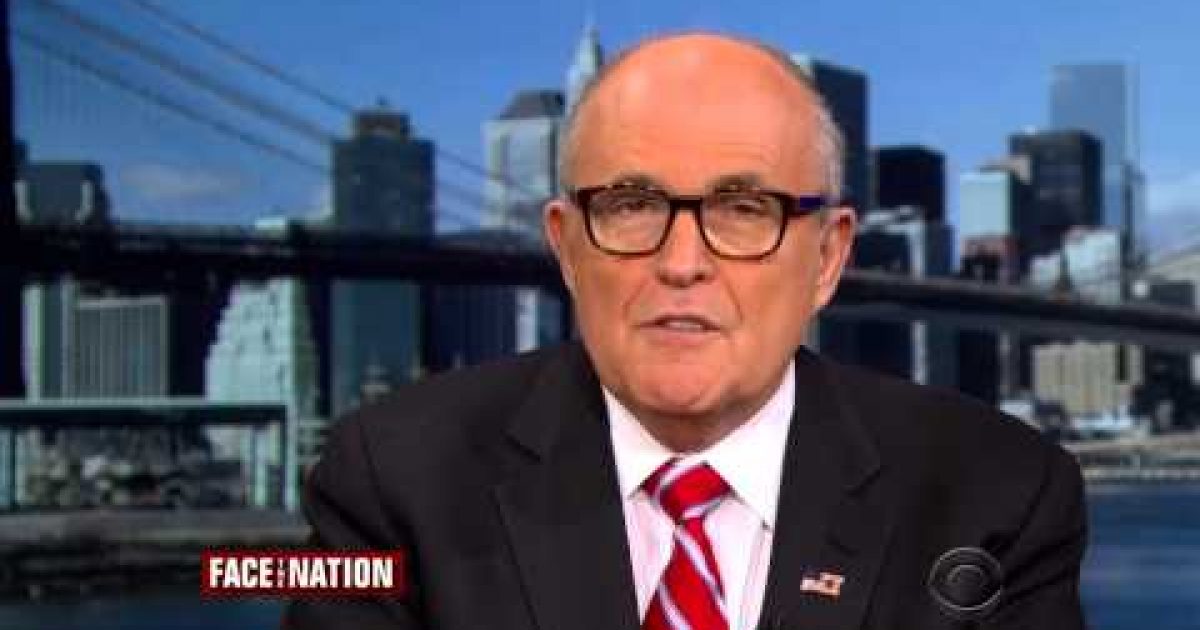 Former NYC Mayor Rudy Giuliani was interviewed by Major Garrett who was guest hosting on today’s “Face The Nation.” Giuliani explained what he meant by his claim that President Obama is at the center of a propaganda narrative that “everybody should hate the police,” which was recently called a lie by Wapo fact checker Glenn Kessler. According to America’s Mayor it is what Obama does, like associating with Al Sharpton which promotes the anti-Cop narrative, more than what he says.

Garrett began the questioning by agreeing with Kessler I cover the president every single day, I never detected anything that comes along the line of propaganda urging the country to hate police. Do you want to recast that or take that back?”

Oh, not at all. I think you missed one very important point. He has had Al Sharpton to the White House 85 times. Often when he’s talking abut police issues he has Al Sharpton sitting next to him. If we like to have poster boy for hating the police it’s Al Sharpton. You make Al Sharpton a close advisor you turn the police in America against you. You’re going to tell the police in America we don’t understand you. I saw this man help cause riots in New York. I’ve heard his anti-police invective first hand. To have a man who hasn’t paid $4 million in taxes, a man who spent his career helping to create riots, phony stories abut police, to have that man sitting next to you speaks volumes, actions speak louder than words. You put Al Sharpton next to you, you just told everyone I’m against the police.

Garrett tried to bring back the question of Obama’s rhetoric again, but Giuliani explained:

Look, who you associate with is part of your rhetoric. If I was talking to you about ending the mafia as I did in 1980s or fighting the mafia, and I had Joe Colombo sitting next to me, you would say I was a big hypocrite wouldn’t you? It wouldn’t matter what my rhetoric was. ‘Oh I’m fighting the mafia,’ but there’s Joe Columbo.

I’m for the police and there is Al Sharpton? Every cop in America is going to say give me a break; I get the point, Mr. President. His interference in the Gates affair — The pays great attention to these so called racial incidents some of which are not racial incidents, sends representatives to funerals of people who were killed in the commission of committing a crime. And I haven’t heard him make very strong comments about the deaths of Ramos and Liu. I think the “Washington Post” fact checking was substantially inaccurate they missed one big point, Al Sharpton.

The former Mayor went on to say the claims that DeBlasio had blood on his hand were wrong, and the present Mayor did not mean to inflame the cops with what he said about giving his son the warning against cops speech.

He did say that DeBlasio should apologize to the cops, and he too should get rid of Sharpton.

Regular readers of this site will know that I agree with the Mayor,  Al Sharpton is a destructive force in America who has never apologized for his hateful acts, sadly the mainstream media “loves” the guy and never calls him out for his life long assault on a unified America.

Watch the video of Giuliani’s appearance below: